Footy finally returned, with some of the most popular Fantasy picks hitting either fantastic or terrible scores in a topsy turvy round one.

Penrith's upset win over the Roosters brought good Fantasy scores for a few players, including the number one must-have of the pre-season Api Koroisau. With his minutes set to virtually double this year, the returning Panther produced an out-of-the box score to top the round with 86 including a whopping 59 tackles, six busts and over 100 run metres.

His teammate Isaah Yeo (78) is in barely half a percent of teams but busted seven tackles with 170 metres in his 78 point 80-minute effort. Nathan Cleary (68) earned early bragging rights over Mitch Moses (41) with his 570 kick metres, four goals and try assist.

Two of the top five most-owned players are young Brisbane forwards, and neither the most expensive player in the game, Payne Haas (73) nor David Fifita (76) disappointed.

Get Caught Up: Round 1

Fifita was on track for a potentially underwhelming score until a frankly ridiculous long-range solo try that no forward has any business scoring, while Haas churned out 80 minutes in the front row and may potentially be an even better Fantasy player this year than last.

Shaun Johnson was not popular with Fantasy coaches to start the year but proved his status as one of the Fantasy greats with a bit of everything in his 73 while Jack Wighton (72) bagged a double, Phillip Sami (71) was outstanding filling in at fullback and Adam Reynolds (69) made a good start as club captain.

Round two to continue with suspension of season deemed 'catastrophic'

George Williams (64) easily cleared his lofty starting break-even, Jamayne Isaako (63) could be an astute buy at fullback following Jack Bird's injury and Jason Taumalolo (62) was a good captaincy option for those that didn't start with Haas.

Some superstar fullbacks got off to slow starts with Tom Trbojevic (17) and James Tedesco (30) falling well short of expectations. It's far from panic stations with either though.

Charnze Nicoll-Klokstad (16) went off early with an HIA and another expensive fullback in Latrell Mitchell (14) had an even slower start, barely touching the ball in attack and getting a 25-minute early mark. With the loss of goal kicking and adapting to a new position, he was always a chance of starting slowly.

The move to an edge appears to have dulled Cam Murray's (34) involvement without boosting his minutes, although again it's early days while Andrew Fifita (27) appears a shadow of his former Fantasy self.

There were some disappointing scores among the cheapies too.

Marshall gets the Wests Tigers level

Brayden Wiliame (16) and Jamil Hopoate (18) were always risky buys and will hopefully put together a score or two at some point.

Zane Musgrove (13) played just 26 minutes and had little involvement. Caleb Aekins (14) got an early shower and also had little involvement. Jaydn Su'A (29) and Joe Stimson (24) were both very underwhelming although with 70-odd minutes each are worth persisting with. Brandon Wakeham (21) didn't have many chances in a dour game and with the benefit of goal-kicking duties should improve his scores.

Round 1 team of the week 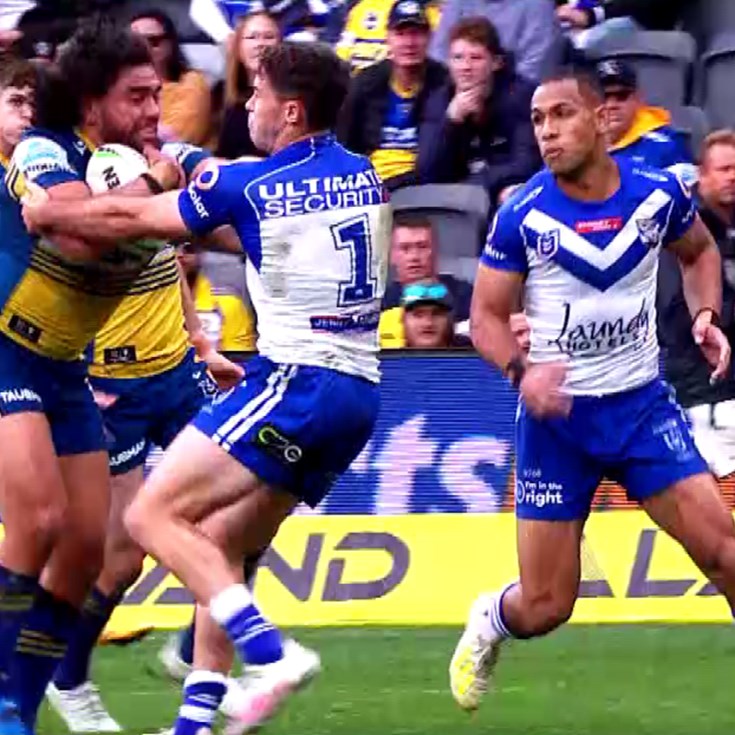