Tom Trbojevic was a one-man points machine for the Sea Eagles in their 32-6 romp over the Bulldogs, finishing with two tries and three try assists at Central Coast Stadium.

The hefty margin of Manly's win lifted Des Hasler's men from 10th to sixth on the ladder.

The Bulldogs, who tried a different halves combination from their first two losses in March, have collected a third straight defeat leaving them alongside the Titans, Sharks and Dragons in the winless brigade.

The pressure will now increase on the shoulders of international half Kieran Foran when he returns in the coming weeks.

But what a boon for rep coaches Brad Fittler and Mal Meninga with James Tedesco and Trbojevic at their disposal for their respective NSW Blues and Kangaroos line-ups.

After the Roosters fullback riot over the Rabbitohs on Friday night breaking through 14 tackles and scoring a try, Trbojevic let loose on Sunday night with 188 metres on top of his involvement in five of his side's seven tries.

These are the very two players many have nominated as the ones to revel in the NRL's new ruck rules, which have opened up the game for smart, quick-footed players.

But Trbojevic doesn't want  to be singled out as the only beneficiary of the changes.

"I think it suits a lot of fullbacks in a way. As a fullback you're always in the middle pushing up, and supporting," he said.

"So if people are tired it gives you a lot more opportunities. It suits us all."

He said he felt no pressure coming into the Bulldogs game to produce some points his name had been mentioned in the media as one of the players to excel in the new environment.

"I felt no pressure because of that. You feel pressure just playing in the NRL - you're still always nervous before a game, everyone in the game understands that."

Manly fans must be feeling some kind of bonanza that after losing star fullback Brett Stewart to retirement, someone of the calibre of Trbojevic is the next to pull on the No.1 jersey.

"I'm certainly not above Brett. What he did in his career was pretty special. He's a great player, a great bloke, and a great person to learn off," Trbojevic said.

The 24-year-old's talents in either distributing or receiving the ball led to Manly's three first-half tries and the 14-0 lead over the Dogs at the break.

The game was only three minutes old when Moses Suli put a fend on Bulldogs winger Nick Meaney and found a speedy Trbojevic in support.

Twenty-two minutes later and Trbojevic accepted a sublime short pass from elder brother Jake to cross for his second. Manly's No.1 wasn't finished.

He held the ball up beautifully for centre Brad Parker to score late in the first half, and then sent a cut-out pass for winger Jorge Taufua to score early in the second.

Trbojevic put Parker away for another try after he accepted a nice pass from his skipper and halfback Daly Cherry-Evans in the 63rd minute.

Winger Reuben Garrick and back-rower Curtis Sironen made up Manly's seven tries. If Garrick's right boot hadn't let him down – two from seven conversions – the margin would have been as many as 10 points greater.

The Bulldogs could not construct any points in the opening 40 minutes. Part of that was poor handling – they had five dropped balls in the first 24 minutes, most while on the attack inside Manly’s 20-metre zone. They also had three six-again calls in their favour.

Hasler's men were no saints either with a half-dozen errors in the first half, but they at least had Trbojevic in their side.

The Bulldogs did score a consolation try in the 70th minute when Jake Averillo swooped on a kick by Lachlan Lewis. He had shifted to five-eighth against Manly with Jack Cogger taking on the No.7 after Brandon Wakeham was overlooked following the losses to the Eels and Cowboys.

But their inability to compile any kind of threats to the Sea Eagles line will be the central focus this week as they build towards facing the Dragons at Bankwest Stadium next Monday. 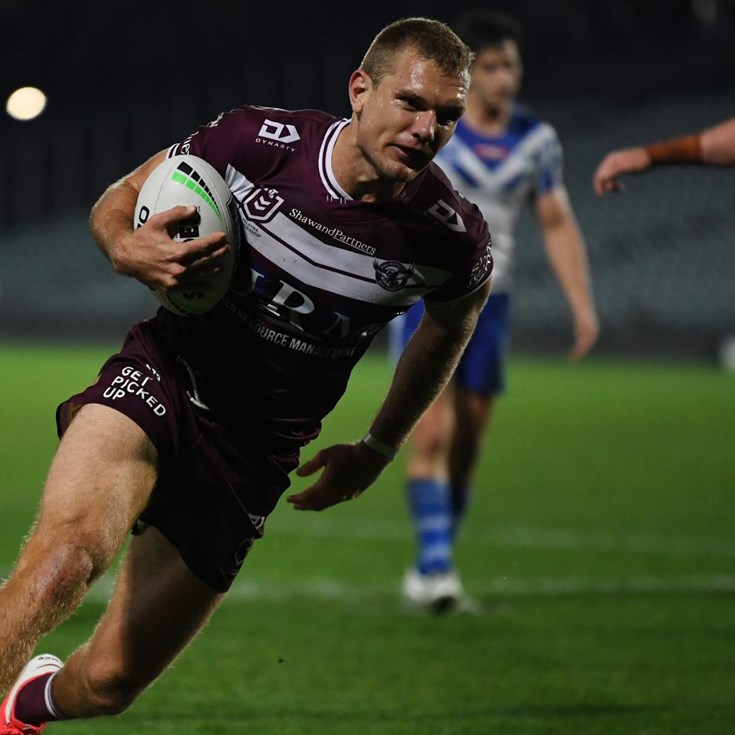 Parker cruises in from a Tom Trbojevic pass

Tom Trbojevic gets a first half double