Cronulla's right-edge combination of Jesse Ramien and Ronaldo Mulitalo wreaked havoc on the Cowboys as the Sharks contained Valentine Holmes in a see-sawing 26-16 win on Saturday night.

Powerful centre Ramien and his nimble winger Mulitalo both bagged doubles to propel the Sharks to their first victory of the season.

Ramien, in particular, was immense, recording 162 metres, a try assist and a bone rattler on Justin O'Neill which shook the foundations of Queensland Country Bank Stadium.

Holmes, meanwhile, had limited impact in his first meeting with the club he abruptly departed after 2018 to chase an NFL dream, the Cowboys fullback tallying 108 metres and two errors.

In a mistake-riddled contest where both sides completed at less than 75 percent, Shaun Johnson stood up without hamstrung halves partner Chad Townsend, having a role in four tries.

Matt Moylan also had some classy touches in his return to five-eighth.

"There were a few challenges there," Cowboys coach Paul Green said.

"I can't fault their effort but it was frustrating also because if we could have just got on our game on a little bit more consistently, I felt we were creating opportunities and we probably would have given ourselves a chance to win.

"That's what makes it so hard to swallow. We created enough opportunities to win the game but at different times we weren't good enough to be tough enough to defend it either."

There was drama aplenty before kick-off when a handful of Sharks players including Moylan, Johnson, Toby Rudolf and Aaron Woods failed their initial biosecurity temperature check upon arriving at the venue.

Fortunately for Cronulla, who could have struggled to field a side, the players recorded an acceptable reading of 37.2 degrees or under on their second attempt 15 minutes later.

Having defended their line early, the Sharks drew first blood after being invited to attack by a Scott Drinkwater error.

Hooker Blayke Brailey made a bust through the middle and his ensuing quick play-the-ball allowed for a quick shift right, where Will Kennedy dropped the ball back for Ramien to score.

Ramien scoops up a loose ball at speed

The Cowboys levelled up moments later courtesy of Kyle Feldt, who strolled over from a smart Jake Clifford pass after his opposite winger Sione Katoa jammed in to create an overlap.

The tit-for-tat nature of the contest continued when the Sharks capitalised on a coach-killing Shane Wright mistake in the set after points. Johnson set up a try by perfectly curling a grubber into the path of Mulitalo before nailing the sideline conversion.

Cronulla looked to have landed a body blow in the shadows of half-time when Ramien went over again, only for the Bunker to deny the try due to a Briton Nikora obstruction.

North Queensland exploded out of the blocks in the second half, scoring three minutes in when Drinkwater caught Mulitalo out with a chip kick that O'Neill pounced on to cut the margin to two.

But once again the Cowboys failed to complete the set after points and Cronulla made them pay as Mulitalo redeemed himself with a stellar diving finish following a Ramien assist.

Ramien scooted away for a long-range try in the 51st minute after Johnson collected a loose ball, but moments later Feldt scooped up a shanked Katoa kick to race away in a 75-metre effort of his own.

As they had done all night, the Sharks wasted little time responding – this time Mulitalo tapped back a Johnson bomb for Nikora to rumble into the in-goal.

But there were some nervous moments still to come for Cronulla.

On the back of Johnson missing a kick for touch, it seemed the Cowboys had scored but a knock on was ruled before Esan Marsters touched down from a cross-field kick.

North Queensland had a few chances at the death but couldn't run down the Sharks.

Green said he was unsure whether Asiata would be fit for next week's clash with the Warriors on the Central Coast, while Taumalolo's chances of returning from bone bruising on the knee will be assessed after training on Monday. 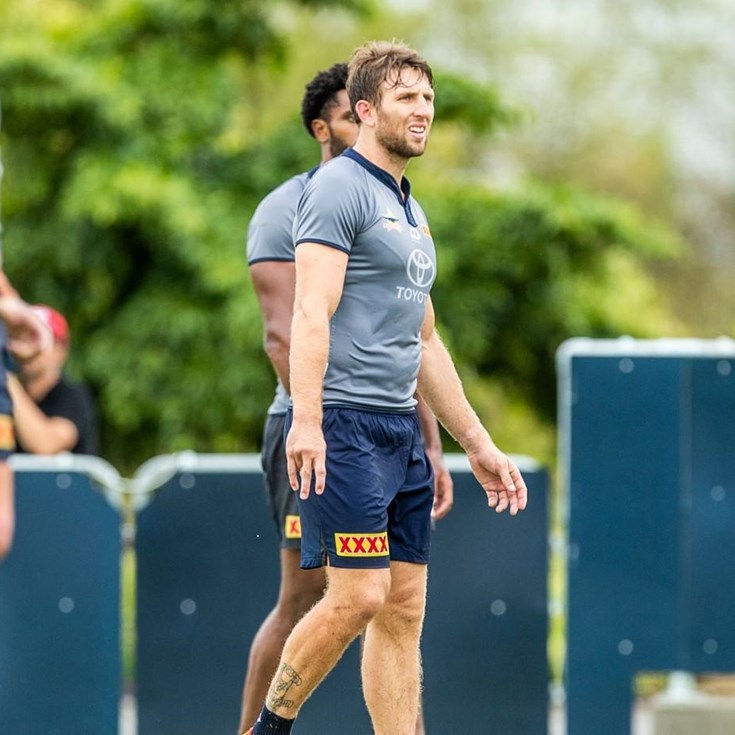