After calling Central Coast Stadium 'home' for the past five weeks the Sea Eagles return to their spiritual nest at Brookvale this weekend for what shapes as a ripping clash with their old sparring partners Newcastle.

Ever since Mark Carroll and Paul Harragon were locking horns in the 90s and Darren Albert broke Manly hearts in one of the all-time great grand finals, the Sea Eagles and Knights have taken great delight in tearing into each other and leaving nothing in reserve.

Manly had the wood on Newcastle in their two clashes in 2019 and would love to make it a hat-trick but without Tom Trbojevic and Dylan Walker they'll be stretched to the limit by a Knights side desperate to rebound from a listless performance against the Cowboys.

Sea Eagles: Manly are 1-17 with Morgan Boyle and Brendan Elliott the match-day omissions. Moses Suli (finger) returns in place of Elliot. Martin Taupau has again been named in the starting side ahead of Sean Keppie, but the pair swapped spots last week.

Abbas Miski and Haumole Olakau'atu dropped out of the extended squad 24 hours before kick-off. The Sea Eagles have won nine of their past 11 games against the Knights.

Knights: Newcastle are also 1-17 with Tautau Moga and Brodie Jones the final cuts from their match-day line-up. Best returns at centre after a week in quarantine in place of Gehamat Shibasaki. In the pack, Herman Ese'ese starts at lock with Tim Glasby out after failing a HIA last week and Pasami Saulo called up on the bench.

Phoenix Crossland and Josh King were omitted from the initial 21-man squad on Saturday. The Knights have won only one of their past nine games at Lottoland.

Daly Cherry-Evans v Mitchell Pearce. The incumbent State of Origin halfbacks go head-to-head. So much of Manly’s attack revolves around Cherry-Evans with Tom Trbojevic and Dylan Walker out. Pearce had a very quiet game against North Queensland – behind a well-beaten forward pack, in fairness – and will want to help prove Newcastle’s early form wasn’t a fluke.

Don’t expect too many one-out runs in this match, the Knights (first) and Manly (second) have made more support runs that any other team over the opening seven rounds. 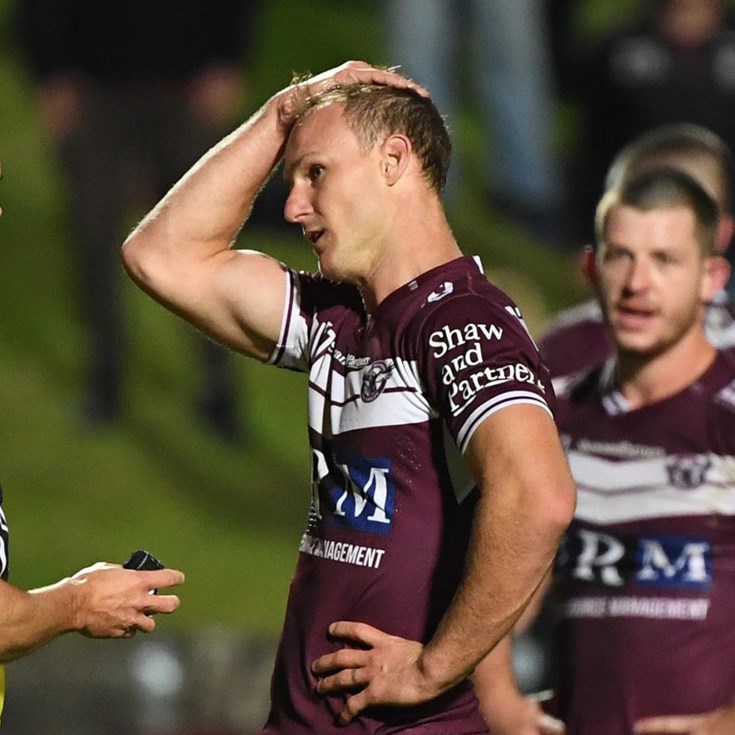 The fallout from the no-penalty call for the Sea Eagles