Canberra have overcome a growing injury toll and fast-finishing Dragons outfit to hold on for a 22-16 victory in their return to GIO Stadium on Friday night.

The Raiders looked in cruise control after compiling a 22-0 lead midway through the second half until three Dragons tries in the final quarter of the game set up a grandstand finish.

Raiders coach Ricky Stuart sprung a couple of late changes pre-game in a bid to provide starch in the middle period with internationals Josh Papalii and Joseph Tapine relegated to the bench.

Englishman Ryan Sutton and Emre Guler's promotion to the starting line-up paid dividends for Stuart in a bid for a fast start with two tries inside 15 minutes.

But Canberra finished the game with 14 players, raising concerns for Stuart leading into next week's rematch with the Storm.

Veteran forward Iosia Soliola appears to be of most concern with a suspected facial fracture, while Guler (ankle) and Elliott Whitehead (eye) were also casualties.

The Raiders' left edge attack was causing havoc for the Dragons early with Charnze Nicoll-Klokstad chiming into the backline with a cut-out pass for Nick Cotric to slither over the line.

St George Illawarra were their own worst enemies with a defensive error from Jason Saab leading to the Raiders' first, before Bailey Simonsson soared above Mikaele Ravalawa to deliver the Raiders' second.

The Dragons had their chances in decent field position to get on the board but playmakers Corey Norman and Adam Clune had little answers.

Canberra's 12-0 lead appeared to be a dim reflection of their dominance in the first half until a solo effort from George Williams two minutes before the break put the Green Men further ahead.

Out-of-favour playmaker Ben Hunt did his best to inspire the Dragons after half-time with a bust on the left edge – the final kick to Matt Dufty bouncing into the hands of Jarrod Croker in a rare try-scoring opportunity.

The Dragons' night was summed up with 25 minutes remaining when a Raiders line dropout was spilt by Ravalawa to hand momentum back to the home side.

Raiders five-eighth Jack Wighton needed little invitation to take advantage of Dufty being out of position in the following play – placing a deft kick for Croker to collect for the Green Machine's fourth of the evening.

The scoreline looked like it was about to get out of hand with a quarter of the game left but a chunk of momentum to the visitors led to two quick tries and got them back within striking distance.

Dufty made up for his mistake two minutes later in a similar play to get the Dragons on the board in the 60th minute – pouncing on a Norman kick in-goal with Nicoll-Klokstad caught in the line.

The Dragons fullback then delivered some early ball for Zac Lomax, who got the better of Croker one-on-one before finishing off a try via Saab.

A runaway effort from Euan Aitken sent Dufty over for a second try with just over a minute left on the clock but the Raiders did enough late to hang on. 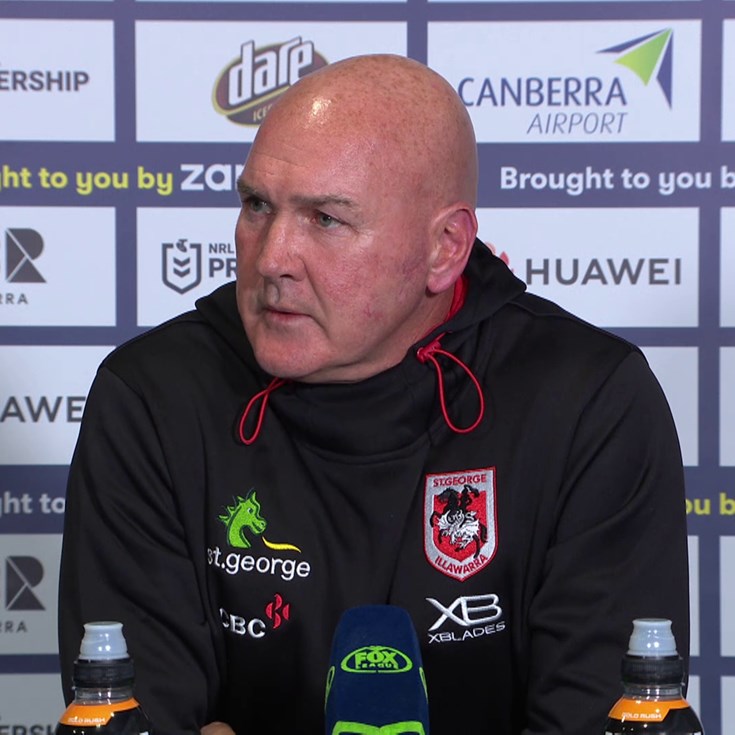 McInnes predicts new six-again variation will be harder to police