The art of the offload was supposedly dying in the modern era but Parramatta have brought it back to great effect to be well clear of any other team for second-phase play in their surge to first place.

Living up to their name, the slippery Eels had produced 40 more effective offloads than any other team leading into this round.

The ability for big boppers like Junior Paulo (26 offloads, first in the NRL), Ryan Matterson (22, third), Kane Evans (13, 12th) and Shaun Lane (12, equal 13th) to dent the defensive line and then get the ball away has been a cornerstone of the table-topping Parramatta's recent success.

They also led the league for offloads last regular season (302) and gained the most metres from them (2463m).

Stats Perform have crunched the numbers to show the Eels' offloading dominance in 2020.

The Eels boast a 95 percent effective offload rate (fifth in league), having attempted 142 overall ahead of Sunday's clash with Newcastle.

Benefitting from the faster ruck speed and increased fatigue due to the new six-again rule and reversion to one referee, Parramatta have pinched plenty of metres and created points by keeping the ball alive.

Racking up the second-phase metres

The Roosters were more efficient on a per-offload basis, gaining 8.6m to Parramatta's 6.9m, but the Eels made up for it with volume.

Five of Parramatta's try assists are credited as being offloads – the best return in the competition alongside the Roosters.

Nine Eels tries have involved an offload in the play, accounting for 27 percent of their 33 four-pointers. Only the Chooks (10) had more.

He weighs 123 kilograms and relishes heavy contact, but Eels prop Paulo is also blessed with the deft hands of a halfback.

Since returning to the club last year, Paulo has been given the freedom to promote the footy by coach Arthur.

Paulo's philosophy can best be summed up as controlled chaos.

"Nothing's premeditated. You obviously have to sight your target before you get the pass away," he told NRL.com of his approach before last year's finals.

"There's no point in passing and hoping someone's going to be there to catch it. The madness has a bit of method to it. I've always been capable of playing that footy; it's just whether or not I've been given a licence to play."

Paulo contributed 52 effective offloads in the 2019 regular season to rank equal third with Andrew Fifita behind Corey Harawira-Naera (59) and Tevita Pangai jnr (55). He's on track to smash that mark even with the shortened 20 rounds.

The former Raider averages 5.4 runs per effective offload. His teammates have run for 145.5 metres from his offloads.

Second-rower Matterson has been even more prolific in that area, with 242.3m being added off his offloads.

In a clear sign of Arthur's influence and tactics, Matterson has easily exceeded the 14 effective offloads he threw as a Tiger in 2019.

Front-rower Evans – currently out with a calf injury – is ranked second for runs per effective offload with an average of four.

The battle between the Newcastle and Parramatta forwards at McDonald Jones Stadium should be a cracker.

Aside from the physical contest, it will be interesting to see which pack gets the better of the offloading.

Knights enforcer David Klemmer has shown vast offloading improvement this season. Coming into round eight, he sat one behind Paulo with 25 passes in contact.

The NSW Origin prop produced 23 effective offloads last year. He claims there has been no secret to his increased output, nor a directive from coach Adam O'Brien.

"I'm just going to take a normal hit-up and I'm obviously just feeling it and getting them away," Klemmer said earlier this week.

"It's not something you go there predetermined to do, you just sort of feel it and get one away. I've got to be very selective with it … I'm going there to run hard and it's just coming off."

Klemmer thinks his offload boom could be a byproduct of less defenders being involved in tackles due to the faster ruck speed.

"People obviously aren't getting as much numbers in, but I still feel they still try to get some numbers on me and stuff like that," he said.

"I reckon it's benefitted my game a bit and the footy side as well." 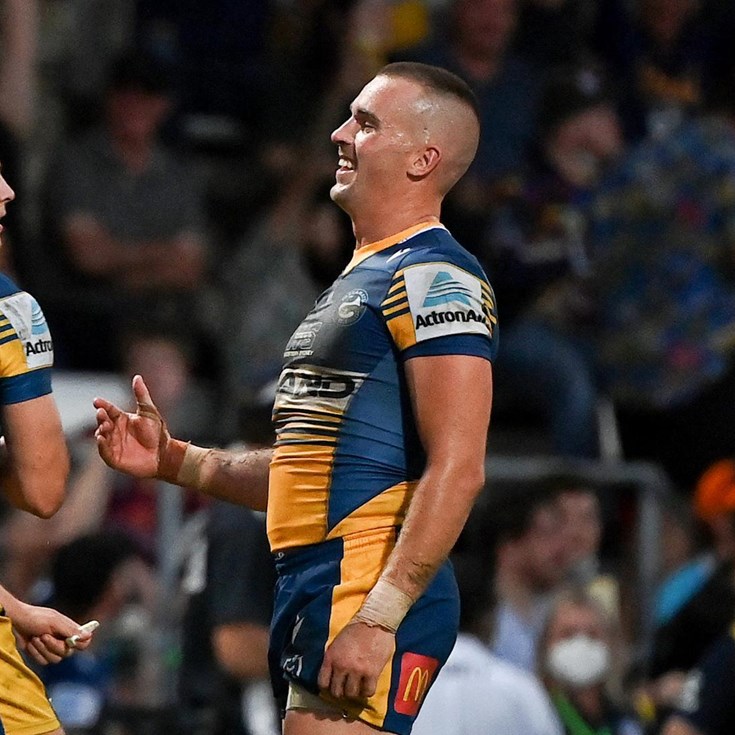 Eels 'upbeat but not overawed' as Arthur explains Matterson call