The Titans ended a 10-game losing streak at Cbus Super Stadium by stunning the Warriors 16-12 courtesy of a late try to rookie Beau Fermor.

The Gold Coast had trailed 12-0 early and looked set for a heavy defeat with diabolical handling costing them dearly in the first half.

On the back of defensive resilience and a brave performance by second-rower Keegan Hipgrave, who played the majority of the match with an injured shoulder, they fought back.

Fermor, who played in the unfamiliar position of centre, scored the match-winner in the 74th minute after chasing a Jamal Fogarty grubber.

Earlier, interim Warriors coach Todd Payten revealed that Ken Maumalo, David Fusitu'a and Agnatius Paasi were set to return to New Zealand after the clash with Cronulla next week.

They have not been able to get their respective families across the Tasman due to  COVID-19 travel restrictions after the squad had relocated to Australia in May.

Payten said the trio had the club's blessing to head home on compassionate grounds.

"I think the lads [as a group] have got their head around the fact they aren't going home," Payten said in his pre-match interview with Fox League.

"With everything going on in Victoria it just looks more and more certain that we’re staying.

"There's a few guys who have expressed that they need to go home for family reasons which is understandable and we’ve given them a promise that can happen after the Cronulla game."

Freakish play from Peachey gets the Titans their second

The Warriors started the match, wearing a "bush shirt" jersey emblazoned with gold and black squares in tribute to the city of Wellington, like men possessed.

Roger Tuivasa-Sheck was on fire and showcased his speed, both between the ears and across the park.

He initially won a captain's challenge for a Titans knock-on from one of his own offloads. From the ensuing scrum, the Warriors skipper stood up Fermor to score his 50th NRL try.

It was the razzle-dazzle Warriors on show moments later as a right to left sweeping play for Peta Hiku to throw a pearler for Ken Maumalo to score in the corner.

Chanel Harris-Tavita landed his second touchline conversion to lead by 12.

A bell ringer of a tackle by Hipgrave on Harris-Tavita jolted the ball free and got the Titans back into the game.

That hit inspired his teammates and soon after Anthony Don stepped inside several Warriors to finish a slick backline move.

Hipgrave injured his shoulder soon afterward but battled on bravely to play for most of the match under duress.

Tuivasa-Sheck straight back into the thick of it

Jack Hetherington, on loan from the Panthers, was denied a try when the Bunker ruled he had pushed Fogarty before scoring after a loose Bryce Cartwright pass bobbled into the in-goal area.

The Titans completed four of their first 11 sets in an error-riddled display but defended with grit, missing just six tackles in an opening half where they made 196.

The Gold Coast needed a touch of genius in the second half and Tyrone Peachey provided it.

Chasing through an Ash Taylor grubber, Peachey collected the ball at pace and flicked it back just before he went over the dead-ball line. Sam Stone was on hand to score and narrow the Warriors lead to just two.

In the 63rd minute, a crunching hit by Warriors centre Patrick Herbert rocked Taylor, who hit his head on the turf and left the field for an HIA.

With Hipgrave following him off soon afterward the Titans needed something special and Fermor provided it with real class in front of a crowd of 5206.

The Titans had lost their last 10 games at Robina with their previous success being a 38-14 win over Newcastle in round six of last year.

It was a fitting way for the home side to finish a day where earlier the life of Titans founding father Tom Searle had been celebrated at a funeral attended by more than 400 people, including a who's who of rugby league.

The guts of the Titans was appreciated by coach Justin Holbrook who has instilled a resilience in his squad.

"It was just a great, determined win. We were extremely poor with the footy in the first half but we defended well," Holbrook said.

"To come away with a win tonight, I am just really happy. The determination for Peach to keep that ball alive for a try and for Beau to chase that kick so hard and be the first to get there was how we won the game tonight.

“We are a patched-up side at the moment with back-rowers playing centres but I am really happy with how we got on with it.

“We haven’t won here in a while so I am very happy for our members and fans who turned up."

Don does what Don does best 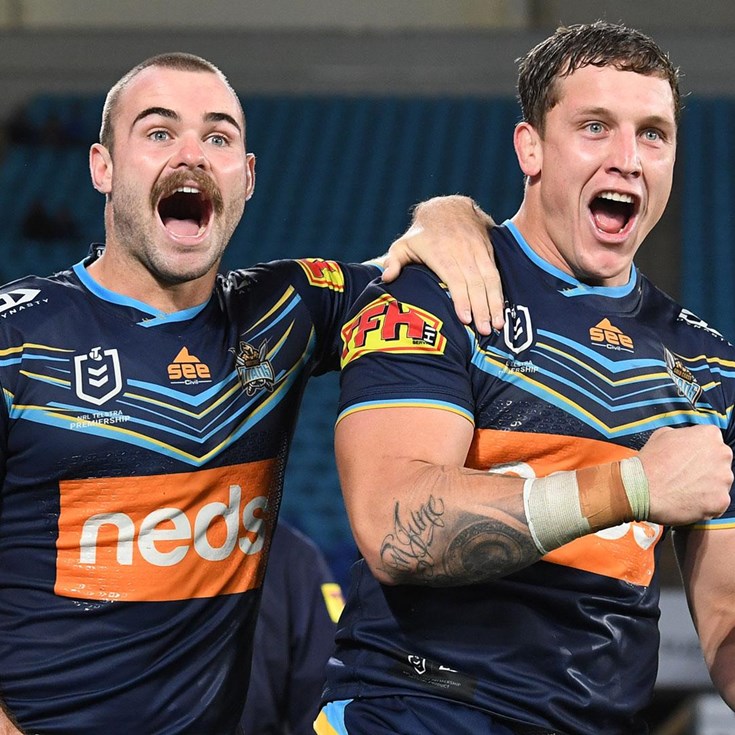 Tuivasa-Sheck straight back into the thick of it