Charlie Staines stamped himself as the next young star off the Penrith production line after scoring four tries in his NRL debut as the Panthers inflicted the heaviest defeat in John Morris’s coaching tenure at Cronulla.

Cheered on by a group of mates who had travelled to Netstrata Jubilee Oval from his home town of Forbes, Staines became the first player to score four tries on debut since Gold Coast's Jordan Atkins in 2008 as the Panthers romped home 56-24.

The 19-year-old was handed his debut after winger Bran To’o suffered an ankle injury in last weekend’s defeat of Wests Tigers but Penrith officials have known for three years that Staines was a star in the making.

A member of the club’s Western Rams development squad, he and five-eighth Matt Burton moved to Penrith in 2018 to play SG Ball and last season he was named the NSWRL’s Jersey Flegg player of the year.

Staines was unable to play NRL before July 1 under the terms of his development contract but as soon as the opportunity arose through the injury to To’o, Panthers coach Ivan Cleary had no hesitation in calling him up against Cronulla.

It was a miserable day for the Sharks, who lost prop Andrew Fifita with a hamstring injury at half-time after the Panthers had raced to a 26-0 lead in as many minutes and appeared set to rack up a cricket score before the home side wrestled back the momentum late in the first half.

With winger Ronaldo Mulitalo given another week to recover from a knee injury, Papua New Guinea international Nene Macdonald was called up for his Sharks debut but the former St George Illawarra star’s return to the NRL was one he would probably rather forget.

Macdonald lost the ball on his first carry near the Cronulla try and Penrith centre Brent Naden scored in the ensuing set of tackles as the Panthers quickly gained control of the match.

Another Cronulla error, this time by fullback Josh Dugan, was also punished when second-rower Liam Martin strolled through a yawning gap created after hooker Api Koroisau stepped to his left and passed to his right for a 13th minute try.

In contrast, the Sharks failed to capitalise on their chances, with centre Bryson Goodwin dropped the ball over the try line and Macdonald being unable to take a Dugan pass in striking range.

With more than 70 per cent possession until late in the first half, the Panthers turned entertainers for centre Stephen Crichton to score a razzle-dazzle try featuring basketball passes from James Fisher-Harris and James Tamou to extend their lead to 16-0 in the 20th minute.

It was then that Staines showed his potential when he finished a backline movement to score in the 24th minute before turning provider for Dylan Edwards two minutes later after breaking into the clear 20 metres out from the Panthers line and sending the fullback racing over to score.

Staines has a hat-trick on debut

Just as it seemed like the match was as good as over as a contest, the Sharks replied with two quick tries through Briton Nikora and Blayke Brailey to reduce Penrith’s lead to 26-12 at half-time.

However, it was only a momentary reprieve and Staines crossed for his second try in the 46th minute after Naden batted back a Cleary kick for Edwards to pick up the ball and pass it out to the rookie winger.

Tamou was sin-binned in the 53rd minute for repeated ruck infringements but not even the loss of their captain could slow the Penrith onslaught, with Billy Burns shrugging off a high shot by Aaron Woods to score three minutes later.

Jesse Ramien interrupted the one-way flow when he stepped his way across the try line for Cronulla in the 59th minute but a Cleary penalty goal after Woods was sin-binned and a Crichton try gave Penrith a 44-18 lead with 13 minutes remaining.

However the Panthers and Staines weren’t done, with the rookie winger crossing for his fourth try in the 79th minute to match Atkins's haul in '08 but one short of the all-time record for a rookie - five by Don Manson for South Sydney against University in round one, 1937. 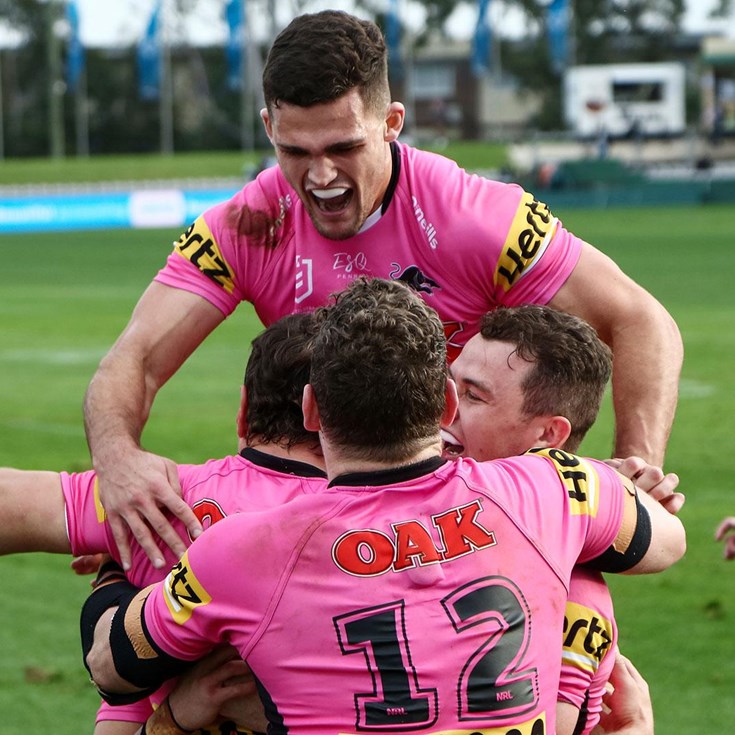 Staines has a hat-trick on debut