A desperate and disciplined effort from Canberra has upset premiership heavyweights the Roosters at their SCG home fortress.

Led by powerful stints from props Josh Papalii and Dunamis Lui, the Raiders overcame the absence of a host of middle forwards and inspirational hooker Josh Hodgson to get up in the Roosters' faces and claw their way to a memorable 24-20 victory.

The Raiders' injury woes got slightly worse with a hamstring strain to centre Michael Oldfield while the Roosters are set to be without Angus Crichton for next week and potentially a few after that due to a medial ligament injury.

Stuart praised the resilience of his side to overcome a huge injury toll and five-day turnaround against the back-to-back premiers.

"There wasn't many people give us a chance tonight outside the people in the inner part of the club," Raiders coach Ricky Stuart said.

"I said last week I don't care what people say or think, they don't know what's under the jumper or what we're built on."

Roosters coach Trent Robinson described the performance as un-Roosters like, with some soft tries through the middle.

"It's happened too many times in the last couple of weeks," Robinson said.

"We can go for months and it never happens; it's been a little bit leaky there the last couple of weeks and it bit us tonight. It's really frustrating, you work so hard, give them (the players) so many raps but we weren't good enough tonight."

The Roosters looked in control for much of the first half but appeared rattled in the second as an aggressive Canberra fought for every inch.

Lui scored the first try of the game and Papalii the last, which proved to be the match-winner, with rookie dummy half Tom Starling impressive job-sharing the role with Siliva Havili and both halves George Williams and Jack Wighton coming up with some big plays.

The Roosters were off their game early with some uncharacteristic errors and penalties gifting the Raiders field position with Lui the unlikely first try-scorer, crashing over next to the sticks in the 12th minute.

That seemed to kick the Tricolours into gear; they spent almost the entirety of the rest of the half camped on the Raiders line building pressure with multiple six-again and line drop out restarts.

They hit back almost immediately after the Lui try with James Tedesco organising a perfectly-worked set play to send Brett Morris over untouched and soon after Kyle Flanagan took the lead 8-6 with a penalty goal when Hudson Young was penalised on his own line.

Morris had his double when Flanagan tossed a perfect looping cutout in the 30th minute but despite all the pressure Canberra refused to fold.

They bombed a late attacking chance which could have seen them go into half time level but got square at 12-all straight after the break.

A silly penalty from Angus Crichton on the kicker gave the Raiders an attacking set and Charnze Nicoll-Klokstad rolled in a nice grubber for a chasing Croker to win the race.

Another penalty goal reinstated a two-point lead for the Roosters but Canberra got back in front, again with the aid of a series of errors and penalties from the Roosters that helped them set up camp at the Chooks' end and George Williams stepped his way to the line.

Miracle ball from Josh Morris gets Ikuvalu over

Debutant winger Semi Valemei, on for an injured Michael Oldfield, came up with an error in the set after points and an amazing Josh Morris flick pass put Matt Ikuvalu over with another Flanagan sideline conversion edging the Roosters back in front 20-18.

Papalii effected the fourth lead change of the half when he strolled through a yawning gap between Lindsay Collins and Mitch Aubusson for a free run to the line and a 24-20 advantage after 66 minutes.

A Raiders breakaway play fell apart with a loose pass allowing Tedesco to launch a counter-attack that should have ended in a Roosters try but a forward pass from Josh Morris denied Ikuvalu his second.

Every time the late surge looked on from the Roosters the Green Machine found a way to hold them at bay and repeatedly ended their own sets in the Roosters' back corners, making the task of getting up the other end near impossible.

Speaking to Fox Sports after the match Croker described the win as "one of the best I've been involved with in my time at the club". 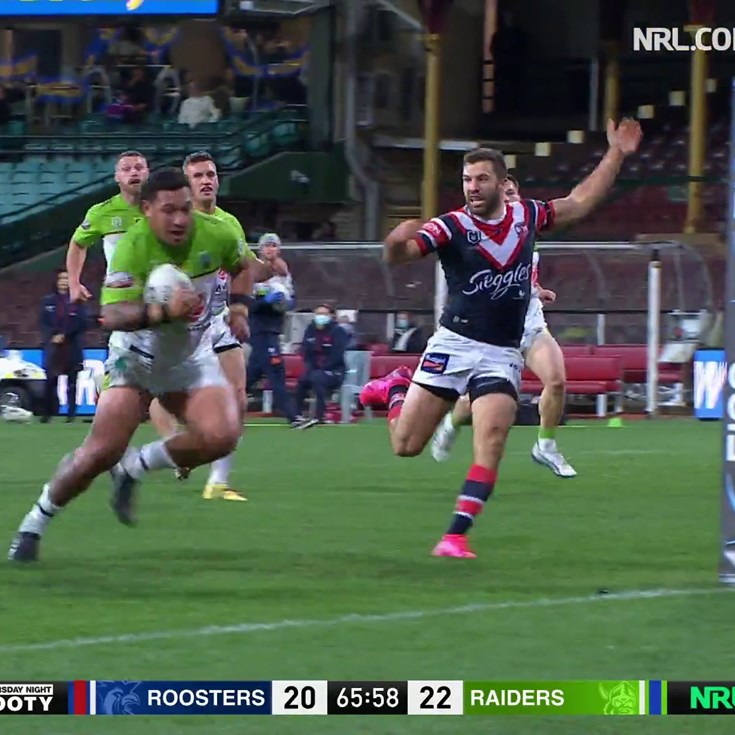 Williams does it all himself to get lead for Canberra

Tedesco lays it on for Brett Morris

Why Williams must take control in Hodgson's absence