With key playmaker Mitch Moses back from injury and another five-star effort from Reagan Campbell-Gillard, the Eels have rebounded  with a 26-16 win over Wests Tigers.

The joint venture was at one stage down to just one fit player on the bench, something which made the task of sending the Eels to a second-straight defeat all the more difficult.

For all the talk during the week around what Ryan Matterson did or did not say on his way out of Concord to Parramatta, the on-field clash was a let-down with the Eels junior concussed in a 15th minute collision with Russell Packer and taking  no further part in the game.

That knock was nowhere near as scary as the one suffered by Tigers back-rower Michael Chee Kam, however. The former Raider and Sea Eagles copped an accidental hip to the head in a 26th minute tackle on Shaun Lane that left him convulsing on the ground.

Play was held up for several minutes while he was attended to and eventually taken off in a medicab.

He was taken to hospital as a precaution but according to the club was in a much-improved condition shortly after leaving the field.

Tigers coach Michael Maguire said Chee Kam was feeling as well as could be expected.

"He spoke to everyone before he left, he's gone to hospital to get checked up but he's ok," Maguire said.

"It's not nice when one of your players is in that sort of position, Chee is a great character and all the boys are really fond of him and they were all concerned but it's good to hear he's okay."

Fullback Adam Doueihi was also rubbed out due to a head knock early in the second half and Sam McIntyre also had to be examined after a couple of head knocks.

The biggest contributor to the win was Campbell-Gillard, the Eels' best player of the past month by a distance, with another huge 68-minute stint that featured 236 metres and a rare try.

For the second week running the Eels were badly off their game early and in-form back-rower Luciano Leilua cashed in with a try when he powered through Ryan Matterson and Reed Mahoney in just the third minute.

Eels coach Brad Arthur was disappointed with yet another slow start.

"We knew they were going to throw everything at us in the first 20 minutes," he said.

"We found a way to win but we've still got a fair bit to work on because it wasn't great.

"Our response was good and I thought our response last week was ok too but we left it too late last week. We can't be starting like that. Second set down on our try line, we have to show a bit more resolve."

The Eels his back when Maiko Sivo powered over the top of Adam Doueihi in the ninth minute, the Tigers fullback placed on report for a possible shoulder charge having braced for impact.

An error in the set after points, with Junior Paulo the culprit, set the Tigers back on the attack and a Doueihi long ball put David Nofoaluma in acres of space on the Eels' left edge for a 10-4 lead, with a penalty goal making it 12-4 soon after.

Second-gamer Andrew Davey produced a lovely offload to Clint Gutherson whose pass sent a galloping Campbell-Gillard on a 45-metre run to the line and a Moses penalty goal soon after levelled up at 12-all with Packer penalised and on report for a crusher tackle.

Moses' deft chip-and-chase took advantage of Douehi's habit of defending up in the line to send his side to the break with a six-point lead.

A stray boot from Nofoaluma defusing a Moses bomb ended Douehi's night and conceded a dropout almost immediately after half-time, with the Eels earning three set restarts at the line. Pressure eventually told when Gutherson's neat grubber sat up nicely for Shaun Lane.

With Moses Mbye filling in at fullback, edge forwards in the centres and for a while just one fit player on the bench while Sam McIntyre was undergoing an HIA, the Tigers produced some gutsy defence to repel waves of Eels attack through the second half.

It couldn't last though with Gutherson providing the ball for Sivo's second try in the 64th minute and an unassailable 26-12 lead.

Some scrappy play towards the end of the game featured a late consolation try to Tommy Talau as the Eels – at least briefly – returned to the top of the Telstra Premiership ladder. 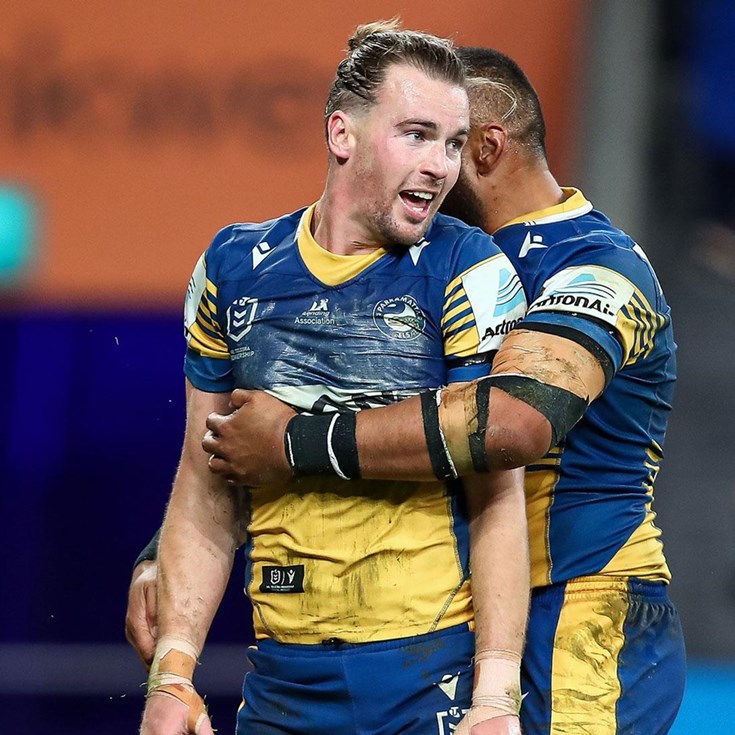