Newcastle will be down to their fourth-choice hooker for the rest of 2020 after Andrew McCullough and Connor Watson suffered season-ending injuries in a horror six-minute stretch against the Bulldogs.

Knights coach Adam O'Brien was left not so much lamenting as lambasting the "sense of entitlement" in his side after an upset 18-12 loss to Canterbury, in which McCullough ripped his hamstring off the bone and Watson suffer a ruptured Achilles.

The Knights face high-flying Melbourne and the greatest No.9 of all time in Cameron Smith next Sunday, with rookie rake Chris Randall the last hooker left standing in O'Brien's top 30 squad.

Kurt Mann was arguably Newcastle's best when he shifted from five-eighth to hooker and may yet be retained in the dummy-half role in combination with the likes of Tex Hoy, Phoenix Crossland or Mason Lino looming as scrumbase and utility options.

The miserable conditions in Newcastle were matched by the mood of their coach, who took aim at his team's attitude after going down to the last-placed Bulldogs.

Asked if the defeat made for his toughest day as a first-grade coach to date, O'Brien didn't mince words.

"I'm embarrassed for the people who sat out in that rain for 80 minutes, it's just not good enough.

"The team needs to understand it's the NRL, you need to turn up. Any team can beat any [other] team. I didn't see it coming.

"I thought we had a really good week at training. But this sense of entitlement we've got at the moment - it's not so much our training, "I think it's in and around our training, during our week that I need to get on top of.

"They're not outwardly saying that they're entitled to anything, I'm just seeing that the attitude, our starts and lack of complete ruthless performances, we've been really patchy. So that to me tells me you just think that things are going happen."

The losses of McCullough and Watson by the half-hour mark come as particularly cruel blows given Jayden Brailey is already out for the season with an ACL rupture.

"Andrew’s ripped his hamstring off the bone," O’Brien said. "Connor’s a ruptured Achilles. Both gone for the year."

As far as call-ups to the 17 for next Sunday's clash with perennial heavyweights Melbourne, Crossland is understood to have impressed Knights insiders during a pre-game scrimmage against the Eels recently.

Hoy and Randall impressed when they were handed their NRL debuts in a round-three epic draw with Penrith, with Randall churning through a gutbusting 72 tackles at hooker.

"[Crossland] has done a hell of a job with his defence, so I'm really confident in his ability to defend," O'Brien said.

"He's quite strong, he's put some size on so he's an option there.

"I've got Chris Randall, who we debuted earlier in the year, and then you've got Tex [Hoy].

"So whether we leave Kurt there and run with that. We've got other options with Tex and Phoenix to come in.

"We said at the start of the year this season was going to take a whole squad and it's going that way." 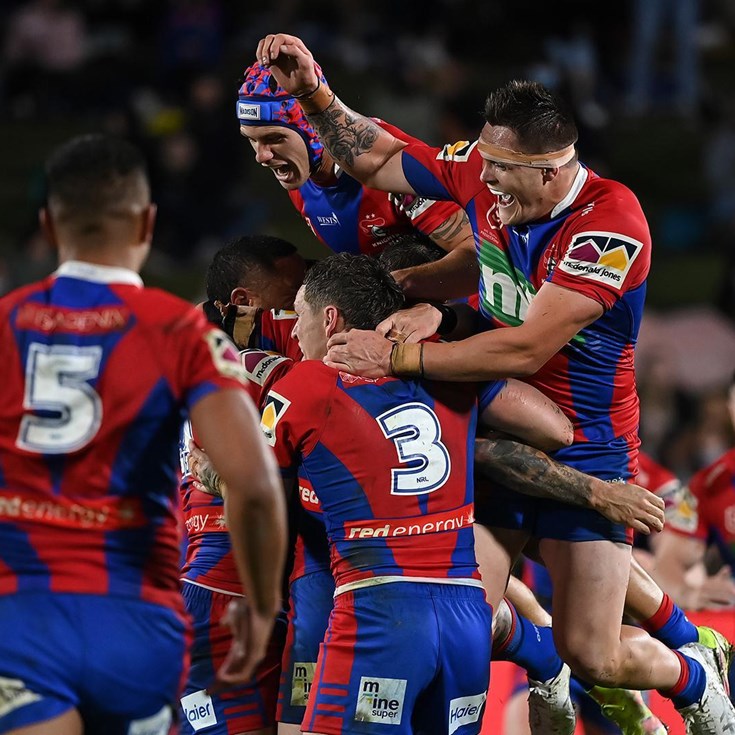