A return to Brisbane - and the uncertainty that comes with it - looms as Andrew McCullough's most likely option as he and Connor Watson shape up to contract calls without another minute of game time.

A horror six minutes in a miserable 18-12 loss to Canterbury has left the Knights 2020 hooker stocks in dire straits and the off-contract pair of McCullough and Watson sidelined for the season with uncertain futures to boot.

McCullough could be out for up to six months after his hamstring was "ripped from the bone" midway through the first half at MacDonald Jones Stadium.

As a result, the 30-year-old would seem likely to take up the 2021 option in his favour with the Broncos, which per the terms of his mid-season release allow McCullough to return to Red Hill if he is unable to land a 2021 NRL deal.

McCullough's unique contract structure offers financial security but no guarantee of a first grade return, given he left Brisbane in the first place when it became clear he had fallen down the club's No.9 pecking order and would struggle to play first grade under Anthony Seibold.

The former Queensland rake's original four-year Broncos contract was believed to be worth around $500,000.

It is unclear what terms a return to Brisbane would be on, with board member and recruitment committee member Darren Lockyer confirming McCullough could be back at the Broncos on "a certain number of dollars" when he exited in May.

The No.9 jersey has got a bit of a curse on it but .. I'll do whatever I need to for the team

A finals cameo in Newcastle colours could well have pushed his cause for another NRL contract elsewhere with the Knights 2021 salary cap unlikely to have room to accommodate him.

Watson, meanwhile, has been negotiating a new Knights deal for some time, with both parties making it clear his first preference is to be retained by the Hunter club.

However, Newcastle's salary cap situation for next season is clouded by the uncertainty over Tim Glasby's future (concussion) and impending finals bonuses such as that contained in Mitchell Pearce's contract if the Knights make the top four or top eight.

NRL.com understands that rival clubs have enquired about Watson's contract status this season, to date being told that the utility playmaker intends to stay put in Newcastle.

Having only just returned from surgery on his right ankle Watson won't get to show his value again this season after cruelly rupturing his left Achilles' tendon in the Bulldogs loss.

He is scheduled to go under the knife again on Tuesday and faces several months on the sidelines.

With McCullough and Watson joining star signing Jayden Brailey (ACL) in a bulging casualty ward, makeshift dummy-half Kurt Mann put his hand up to fill the role again against Melbourne.

Mann was a standout in the Bulldogs loss but has also been impressive at five-eighth this year, with one-game rookie Chris Randell in line for a call-up if Adam O'Brien chooses to keep Mann in the halves.

Young halves Tex Hoy and Phoenix Crossland are also in the frame for the No.6 and utility spots depending how O'Brien balances his playmaking spine next week.

McCullough assisted from the field

"The No.9 jersey has got a bit of a curse on it but If I have to then yeah, definitely, I'll do whatever I need to for the team," Mann said, before pointing out that football manager Danny Buderus, who was in earshot at the time, also boasts some experience in the role.

"I'm happy to do that. I've spent a bit of time there before and got through 60 odd minutes today. I do feel comfortable there.

“It's not much different to playing in the halves except you defend in the middle. I've defended in the middle at times playing lock a fair bit so I'm happy if that's what's needed." 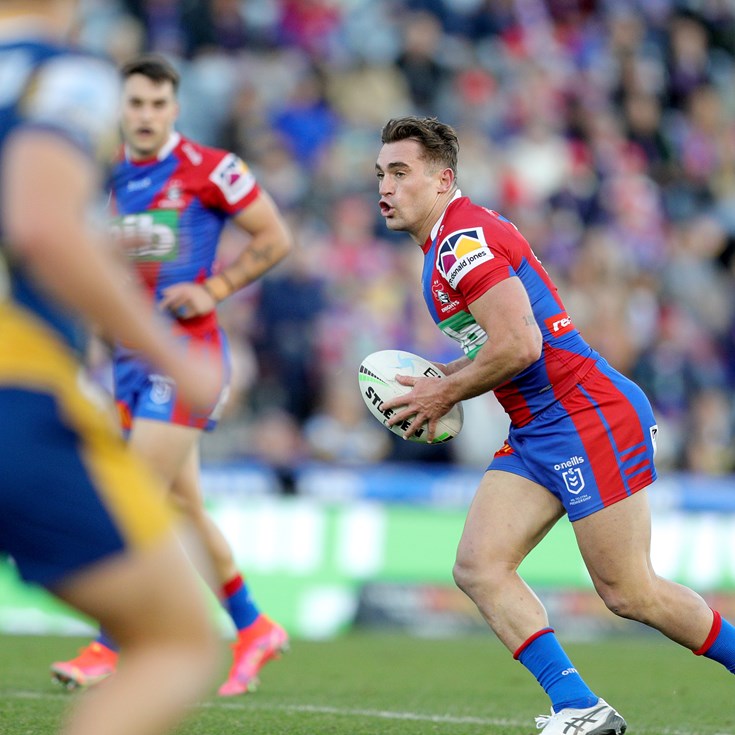