The Dragons, back on Struggle St after successive losses to the Sharks and Rabbitohs, will be desperate to arrest their return to irrelevancy against an injury-hit Roosters line-up suddenly unable to find top gear.

St George Illawarra had won four of six, losing only to last season's grand finalists, to sneak into the fringe of the top eight conversation but all that good work is in danger of evaporating after they failed to make early leads count against both Cronulla and Souths.

The Roosters, meanwhile, have failed to flatter against strugglers the Warriors and Gold Coast as they grapple with an injury crisis that saw them take the field in Round 12 without skipper Boyd Cordner, Brett and Josh Morris, Angus Crichton and Daniel Tupou in addition to long-term absentees Victor Radley, Sam Verrills and Billy Smith.

The back-to-back premiers have done well to stay in touch with the top three during their injury crisis but the pressure will be intense until the cavalry arrives.

Dragons: Paul Vaughan was stood down on game day after breaching biosecurity protocols with Josh Kerr taking his spot in the starting side.

Recent signing Kaide Ellis will become St George Illawarra player No.234, coming onto the bench for his club debut following his mid-year switch from Penrith.

In-form centre Euan Aitken has been named and is expected to play despite a hamstring issue last week.

Corey Norman has been dropped with Adam Clune returning from a concussion in the halves alongside Ben Hunt. Trent Merrin (HIA) also returns taking the place of Jacob Host on the bench.

Jason Saab and Host were omitted from the squad 24 hours before kick-off.

Paul McGregor will coach his 150th game in the NRL.

Roosters: A double blow for the Roosters on Wednesday with prop Jared Waerea-Hargreaves and centre Josh Morris both ruled out with calf injuries.

Lindsay Collins moves into the starting side at prop to replace Waerea-Hargreaves while milestone man Mitch Aubusson shifts to the centres for Morris.

Nat Butcher joins the starting side in the second row and Daniel Fifita and Max Bailey come onto the interchange bench.

Kyle Flanagan has been dropped with Lachlan Lam at halfback and Drew Hutchison called up on the bench. Captain Boyd Cordner's lay-off after a head knock continues.

Aubusson will become the 40th player in the history of the game to play 300 games.

Matt Dufty v James Tedesco: The Dragons custodian has been his team's best over the past two months and will have to continue to provide the attacking spark if St George Illawarra are to have a chance against the Roosters.

Another double against the Rabbitohs gave Dufty 10 tries for the season, good for fourth on the 2020 try-scoring table. Tedesco has been relatively subdued in the past fortnight and every quiet outing takes the NRL's premier No.1 a step closer to another massive game.

He has just four tries for the season and hasn't crossed since his hat-trick against the Bulldogs in round five.

Centre Zac Lomax, Matt Dufty's partner in crime, has been a revelation in 2020 but a rare poor game against Souths saw him ascend to No.1 in errors with 22. If he can't hold on to the ball the Roosters won't need an invitation to punish the Dragons. 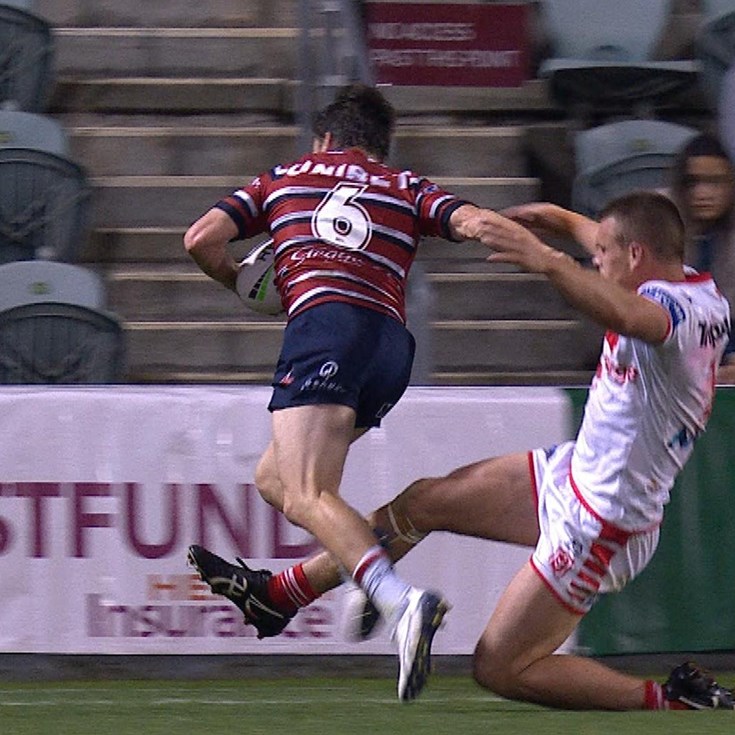