A powerhouse display by newly re-signed back-rower Liam Martin and a double to Josh Mansour in his 150th NRL game helped Penrith demolish Cronulla 38-12 to extend their winning streak to 10 matches.

The Panthers are now three points clear at the top from Melbourne and Parramatta and look all but assured of their first minor premiership since 2003.

Tries in the first half to Mansour, Viliame Kikau, Brent Naden and Stephen Crichton set up a commanding 22-6 lead, before the home side ran in a further three in the next 40 minutes in a clinical performance.

The Sharks were dealt a blow pre-game losing Shaun Johnson to a groin complaint but were no match for a Panthers outfit showing no signs of slowing down.

Johnson's replacement, Braydon Trindall, copped a welcome to Penrith early with a barnstorming Kikau charge proving too hard to handle close to the line.

The one-way traffic continued in the 13th minute with Mansour diving over untouched after a Jarome Luai cut-out pass left opposite number Ronaldo Mulitalo clutching at air.

Things began to look worrying for the visitors when Matt Moylan was steamrolled by Martin – the back-rower also getting past Josh Dugan to race 30 metres and send Naden over on the right edge.

Panthers coach Ivan Cleary said it was "really cool" to see Martin respond after inking his new deal with the club this week.

Martin beats Moylan and goes all the way

"I tried to subtly say to him during the week he's got his cash now so has to keep performing," Cleary said.

"That performance shows the character of him. He's still pretty raw and works hard on the edge there.

"I think he struggled to feel he belonged and has worked his way into that last year and started this year really well."

The Panthers have now gone an incredible 14 straight games without conceding a try in the opening 20 minutes.

A barge over try from Jesse Ramien in the 27th minute narrowed the lead momentarily but the Panthers struck another blow before the break when Crichton plucked a Nathan Cleary cross-field kick from the air to score his 13th try of the season.

The Sharks desperately needed to be first to score in the second half but were denied through Jack Williams when Trindall was ruled to have spilt the ball on review.

The moment proved critical to any hopes the visitors had of mounting a comeback as the Panthers continued to build momentum.

Moylan's night soon worsened courtesy of Martin with the former Panther stripped of the ball in a one-on-one tackle.

He then missed a tackle attempt on the Temora product who charged over to score Penrith's fifth try of the evening.

After demolishing the Sharks 56-24 in round nine, the Panthers weren't done with yet and piled on further pain to John Morris' outfit.

Another bust from Mansour on the left edge finished with a try to Luai as Cronulla's discipline deserted them.

Milestone man Mansour gets a try

Mansour was soon into space once more to weave his way past Ramien in the corner.

"A good night for Sauce [Mansour] as well and well-deserved, he's been a key man in this team for a long time," Cleary said.

"All those guys playing out there have debuted after him. He's been through some tough times at this club so he deserves some good times."

In the only concerns for the side, Api Koroisau left the field with a niggle to his calf, while Kikau was placed on report for a late shot on Trindall. 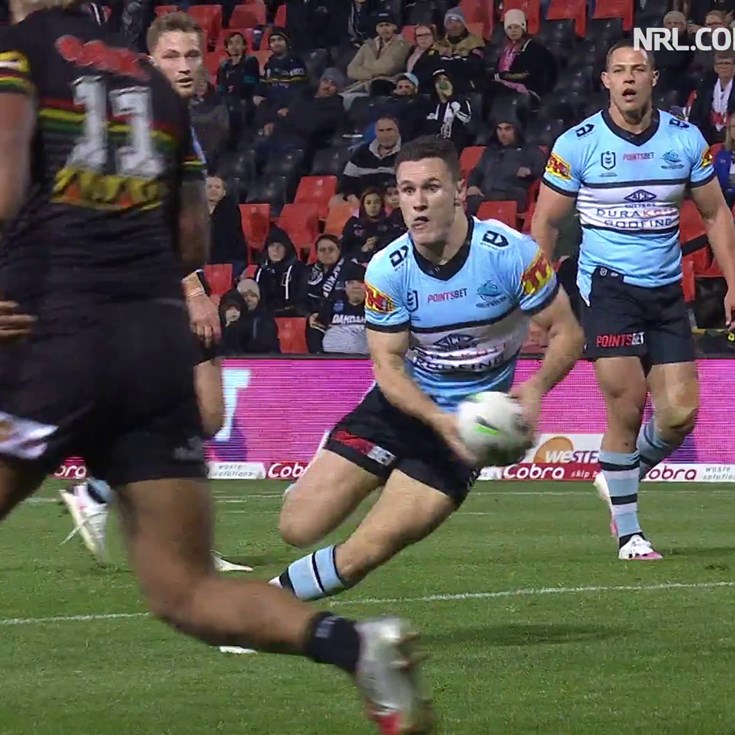 Tracey scoots over for Cronulla

Testing week not a worry for Johnson