South Sydney racked up their greatest half-time lead in 112 years of rugby league history to thrash the Manly Sea Eagles 56-16 at ANZ Stadium.

A blistering six-try performance in the first half set up a remarkable 38-0 scoreline at the break – eclipsing previous 37-0 leads against Wests and Penrith in 1910 and 1980.

Latrell Mitchell ran riot to play a hand in three tries with Adam Reynolds converting seven goals from as many attempts in horror night for the Sea Eagles, who remain winless at the venue since the 2013 preliminary final.

Three tries to the Sea Eagles halted the Rabbitohs' dominance momentarily in the second half but a further four tries confirmed their biggest loss since 2005.

The onslaught began in the eighth minute when Bunnies debutant Steven Marsters finished off a quick pass from Mitchell to charge over in the right-hand corner.

Cameron Murray turned provider shortly after with a late offload allowing Thomas Burgess to carry three defenders with him which allowed a raid on the left edge to be finished off by Alex Johnston.

Johnston was over again just four minutes later in near-identical fashion as Sea Eagles defenders Moses Suli and Reuben Garrick had no answers for the attacking raids.

Manly's night began to sour when Tevita Funa, filling in at fullback for the Sea Eagles, was sin-binned for a swinging arm on Johnston as he was crossing for his second try of the evening.

Johnston left the field for a head injury assessment and failed to return as the Rabbitohs took advantage of an eight-point try following the foul play.

Tries to Campbell Graham via Mitchell cut-out passes in the 18th and 33rd minutes of the game set up an incredible 32-0 scoreline.

Funa's night turned horrible when he threw a pass for Mitchell to intercept 10 metres out from his own line, completing a diabolical opening 40 minutes from Des Hasler's men.

The Sea Eagles lost Joel Thompson pre-game after he failed to overcome a nasty tongue wound in time but were boosted by the early return of Addin Fonua-Blake following a knee injury.

Fonua-Blake led the way in a badly-beaten outfit that were otherwise completely dominated by opposite numbers Tevita Tatola (135 metres) and Thomas Burgess (125 metres) through the middle.

Moses Suli was next to leave the field with a leg injury, while debutant Kurt Dillon was placed on report for a high tackle in the only concern for the Rabbitohs.

A crash-and-bash effort from Tatola handed the Rabbitohs their first try of the second half with 13 minutes left.

Mitchell intercepts a Funa pass as the misery continues for Manly

Mitchell ensured the half-century mark was reached with six minutes left, crossing for a double after a late Mark Nicholls offload.

The points continued late when Cody Walker sent Murray over with a deft kick – Mitchell then stepping up in Reynolds' (nine from nine) absence to ensure the Rabbitohs maintained their 100 percent goal-kicking strike rate for the night .

Manly's finals hopes now appear to be in serious doubt ahead of a must-win clash with Melbourne next week. 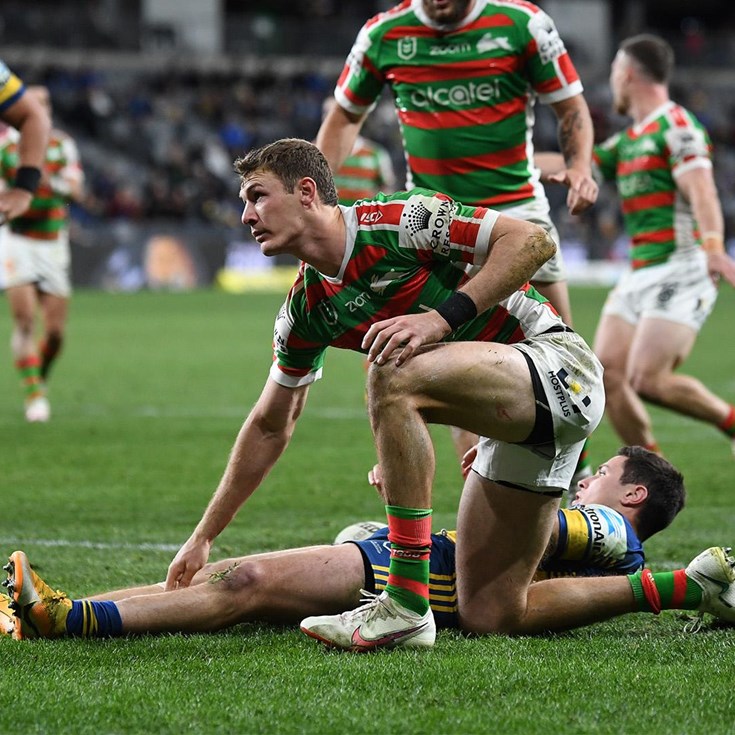