Roosters coach Trent Robinson labelled Sonny Bill Williams' first 13-minute stint back in the NRL since 2014 a success after the premiers downed Canberra 18-6 in a high quality clash on Saturday night.

James Tedesco scored twice in an all-too-familiar masterclass from the representative fullback as the Roosters strengthened their grip on a top-four spot with the finals just a month away.

Williams' first carry was met by a strong wall of Raiders defenders but the premiers proved too good to celebrate Josh Morris' 300th game in style at GIO Stadium.

"To be honest it was pretty fast but I expected that," Williams said.

"I've never played in the middle in my whole career so it was nice just to get back out there, just feel the lungs, taste the blood in the chest.

"It's just special to be back and to be involved with 'J-Moz's' 300th, but also be back playing with the lads that I've really admired from afar."

Robinson said he had two plans to use Williams before opting to play him in the middle.

"To get him uncomfortable, to get some combinations going and then get him off and get him ready again for next week," Robinson said.

“That was our plan first stint and I thought he did well. Obviously he is not a middle defender, so he has played back row his whole career and centre in rugby union.

“But that's what the team needed from him and he knew that so I was really happy with his movements there. He had some goal-line defence sets to do and I thought he did really well.

"Then he had the ability to offer some combination plays and some running and passing and you can see his eyes are wide when it comes to the attacking side of the game. Each game we want to improve on that."

The second edition of the grand final re-match lived up to expectations in the nation's capital but the Roosters' win gives them an edge of finishing in the top four.

The Raiders' night was also soured with Josh Papalii failing to finish the game due to an AC joint shoulder injury that could see him sidelined.

The Roosters took a 12-6 lead midway through the second half via a Kyle Flanagan penalty goal after the visitors scored twice early against a Raiders side who were given chances but couldn't connect in attack.

While all eyes were on SBW's return, it was English namesake George Williams who had an eventful opening half with the Raiders playmaker failing to find touch from an early penalty.

Every touch from SBW's return to the NRL

A heavy hit from Siosiua Taukeiaho and Isaac Liu in defence got things started for the Tricolours on the scoreboard with James Tedesco taking advantage of a Semi Valemei error in the fifth minute.

Tedesco's weaving effort to get past John Bateman delivered the Roosters a 6-0 lead but that advantage quickly evaporated when the Raiders hit back after a forced pass from Jared Waerea-Hargreaves following points.

A George Williams cross-field kick proved accurate for Jordan Rapana to keep the ball alive for Bateman with the Raiders back-rower placing a grubber for himself close to the line.

Williams had the ball on a string to secure two back-to-back sets but poor passes from Jack Wighton and Joseph Tapine relieved the pressure that the Green Machine were creating on the defending premiers.

Kyle Flanagan kicked the Roosters ahead shortly with Daniel Tupou outleaping Nick Cotric in the air.

Tupou's night turned into a mixed bag after his own try with an error before half-time that later saw Luke Keary penalised for a crusher tackle on Charnze Nicoll-Klokstad that could come under scrutiny with the match review committee.

Bateman kicks for himself to score

Nicoll-Klokstad and Wighton were enormous for the Raiders in the opening 40 minutes but the home side couldn't capitalise on multiple chances on the Roosters' line and with a 58 percent possession rate.

A second try to Tedesco was all that split the sides in the second half with the NSW and Australian fullback placing a deft a kick for himself in simple fashion to seal the win.

Tedesco finished the game with 226 metres and 15 tackle busts in a match-winning effort.

"Coming back in, when it comes to Teddy I didn't know what to expect," Williams said.

"He's been one of the best players in the world for the past few years. He's a pretty laid back guy but I have had a lot of conversations with him. There is a lot more than meets the eye." 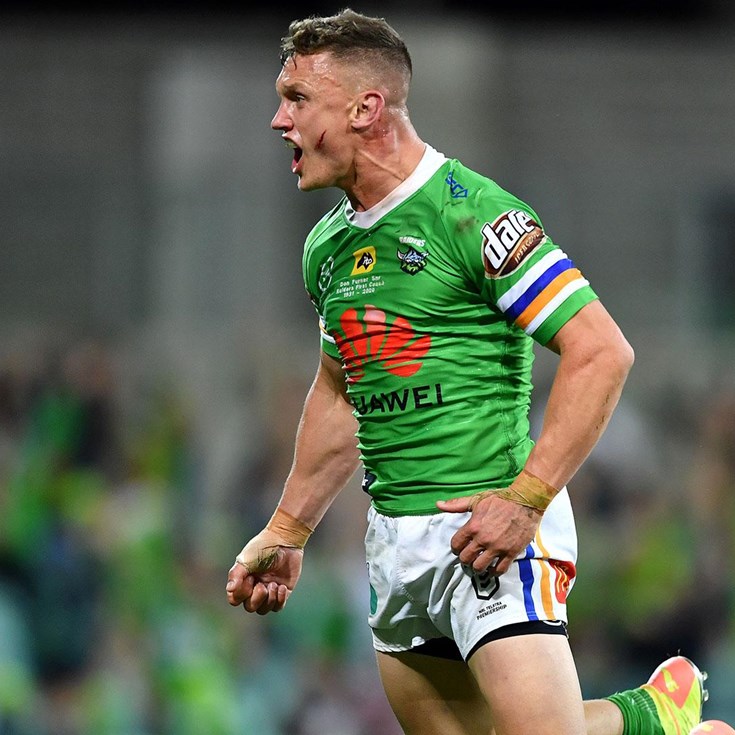 Friend and SBW fit, but how will Sonny be used?

Raiders wary of SBW but focus on other key Roosters