Cronulla's finals campaign has been rocked by a season-ending Achilles rupture to Shaun Johnson as the Roosters rested more than $2.5 million talent, but still marked Mitch Aubusson's record 303rd outing in style.

Johnson collapsed in agony without a hand being laid on him as the premiers comfortably prevailed 34-18 on Saturday night at the Sydney Cricket Ground.

Given his importance to the Sharks' season, their hopes of making a post-season dent hit the deck when Johnson did.

Cronulla on Sunday confirmed the Kiwi international had ruptured his Achilles tendon and would see a surgeon on Monday as he faces a lengthy rehabilitation process.

The Roosters meanwhile did it easy from the outset, ensuring milestone man Aubusson finished his club record 303rd game in red, white and blue a winner.

Just as he has in each of those previous 300-plus outings, Aubusson filled in more than capably, claiming a first-half double after being welcomed onto the paddock via a guard of honour from his teammates.

An ominous showing on first glance this wasn't in the title race.

The fact the Roosters gave nights off to co-captains Boyd Cordner and Jake Friend, powerhouse prop Siosiua Taukeiaho, and the game's best player in James Tedesco, and yet were never threatened, says otherwise.

The Tricolours' 24-12 half-time lead was a fairer indication of this contest than the Sharks' admirable late rally.

Without Johnson they will need much more given his 22 try assists have been far and away the most by any player in this year's competition and Cronulla have been a different side when he has been in it.

With just one match left before the finals, Saturday night's defeat was Cronulla's seventh straight loss to a top eight opponent.

Hulking prop Royce Hunt added yet more concern when he went down with a dislocated kneecap late, he too requiring the medicab to take him from the field.

Josh Dugan also failed to finish with his own knee issue, which saw Luke Keary run in a decisive second-half try while the Sharks centre was down at the opposite end of the field.

"I was a bit disappointed about that," Sharks coach John Morris said.

"Play needed to be stopped there. He needed attention on the field.

"I know [there's] a call to let play go on when guys are down injured, but they scored exactly where Josh should have been in the defensive line down that left edge.

"…I felt that was an ordinary look for our game, to play on when a guy's injured like that."

Aubusson gets a double in his milestone match

The Sharks on Sunday said they were awaiting scans on Hunt and Dugan to determine the full extent of their damage.

Morris will at least welcome back captain Wade Graham next week against Canberra.

The Cronulla coach hinted he could well do so in the halves given Chad Townsend (suspension) and Matt Moylan (hamstring) are still out, while rookies Connor Tracey and Braydon Trindall boast just 20 NRL games between them.

After the premiers' nice milestone touch before kick-off for Aubusson, Joey Manu's short ball, and an ominously bad read by Cronulla's left edge,­­­ gave him a similar saloon passage to the try-line after just four minutes.

The same scenes soon enough though at the other end – with Shaun Johnson sending Siosifa Talakai past former Shark Kyle Flanagan – made for a 6-6 ball game.

Another two points from a Flanagan penalty separated them, before Daniel Tupou stretched them further by wrestling past Sione Katoa in the 23rd minute.

The Roosters' passes weren't quite as fluid as previous weeks.

Isaac Liu's footwork was another matter though, with a couple of would-be Cronulla defenders left for dead before Luke Keary loomed in support for a 20-6 advantage.

Mulitalo try gets the Sharks back in it

Aubusson's second – from an Angus Crichton grubber that neither he or Ronaldo Mulitalo could get a handle on at first grab before the veteran reeled it in – had the Sharks on the ropes.

An eye-catching return of serve from Mulitalo, with legs and arms in every direction as he flew for the corner, came after a long bust by Katoa.

The half-time break and Johnson's horror prognosis took the sting out of proceedings somewhat.

A sublime short-side raid from the Roosters kept the points coming, Keary again on the score-sheet from a 50-metre play he featured in twice.

Late tries for Braden Hamlin-Uele and Manu followed before the Roosters make-shift fullback ended his night early with a sin-binning for a professional foul. 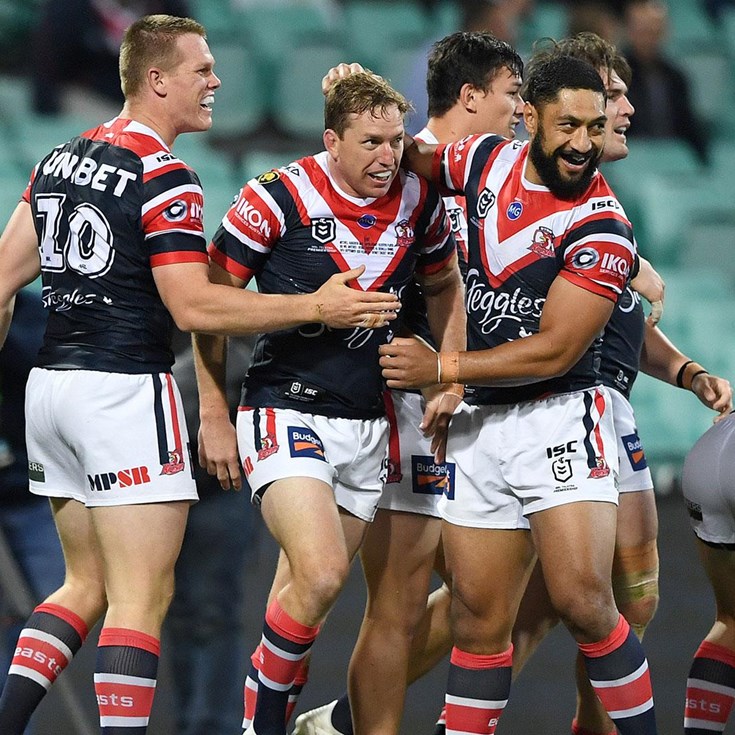 Mulitalo try gets the Sharks back in it