In the final feature in a 10-part series on some of women’s rugby league’s main trailblazers for Harvey Norman Women In League Round, Alicia Newton catches up with Jillaroos legend Karyn Murphy.

Wally Lewis once described Karyn Murphy as one of the most talented players he'd ever seen following a performance that was rated a 10-out-of-10 by Rugby League Week.

Past and present players refer to Murphy as the 'GOAT' (greatest of all time) of women's rugby league in Australia following an international career that went on for more than 15 years and included four World Cup campaigns.

A creative playmaker, Murphy never had it easy throughout her career with New Zealand the bosses on the international stage for over a decade.

However, as Murphy tells NRL.com during Harvey Norman Women In League round, the hard work paid off with a big finish to her career setting up the women's game for the future and creating a pathway for her to take on her other passion - crime investigation.

What was it like growing up in Brisbane in the early 90s as a woman aspiring to be a rugby league player?

I played a lot of the sports on offer, whether it was netball, vigoro, touch football or swimming but the passion was always rugby league. My uncle used to play for Souths Sunnybank so I'd watch him all the time.

That was what I always wanted to do but there were just no opportunities in school, right through until grade. It wasn't until I was in my 20s when I found out there was a small competition in Brisbane so I had a run there and was just excited to know I could play.

You were part of a dominant Queensland side that never lost to NSW during your time - talk us through those battles?

Like any sport that rivalry was there from minute one. We'd always call it Origin and early on NSW were the stronger state. We so were nervous and proud to play for Queensland every time we ran onto the field.

There was this fear, we just never wanted to lose, we were stoked to win that first match in 1999 and from there the run was amazing. To play for 16 years and never lose a game in that time was something that may not be replicated again.

NSW has hit back in recent years, claiming the last four clashes ...

You always knew with every win it was getting closer to a loss but you never wanted to be in the team that did end up losing. To see it the way it is now with NSW having the wood back on Queensland it's hard to take and I know those girls hurt every year.

We definitely don't want NSW to have a streak anywhere near what we had. We'll turn it around this year in November.

You made your debut for Australia in 1998 – can you tell us a bit about that experience – where were you/what do you remember?

We had a nationals carnival on the Gold Coast and I got selected from there in my first year of playing. It was the ultimate for any sportsperson, it was a huge moment. We did a lot of fundraising with raffles put together to play for your country. That made it more special when we ran out.

Our first tour we went over to Fiji and I've told this story before but we had to help prepare the field before we played, it was so different to now. The Fijian team had a lot of rugby union girls. We were quite new to it all but they were quite tough and strong. They put some good hits on us and certainly let us know we were in their country.

Your international career came to an end with a World Cup win in 2013, how satisfying was that win against New Zealand after more than a decade of trying?

Australia and England were fairly similar, we'd always have close games against each other, but New Zealand was just virtually impossible to beat, let alone comfortably. They were too big, too fast, too strong for us.

It was so hard. We had a win in Penrith back in 1999 – it was one win but from then on we got beaten and beaten well for the rest of my time playing. It was hard to take.

Their playmaker, Trish Hina, was so strong and talented, she had an amazing step on her – she could cut out half the field with her pass. When she retired that's one of a few reasons I thought we were a big chance in the World Cup. We had a really good squad and had the financial backing for the first time. I just had that feeling.

You had a 25-year career in the police force while juggling your time in rugby league up until 2015 – what was that like?

The police force was very supportive, they had a lot of men doing similar in the past – when you think of Mal Meninga, Wayne Bennett and Peter Jackson – so they were very supportive of the sport and I was no different.

We had a couple of players as well in Karen Shaw and Theresa Anderson who were in that same position. We'd get a few days of sporting leave throughout the year but the amount of time we'd have off would overtake that.

I'd balance my leave around footy. When I did retire it was nice to get a holiday that wasn't footy. There are a lot of women who still have to juggle shift work but overall most are quite supportive.

Now you’ve combined the two passions and work in the NRL's Integrity Unit – can you give us any sort of insight into what that is like?

I took a 12-month career break to move to Sydney and work with the Integrity Unit in 2015. To be honest, I was never going to stay past that time period, I always wanted to be a career police officer from the age of 18.

In my head, it was a break and opportunity to do something different and learn fresh skills. Living in a different state away from friends and family was also a big thing.

Closer to that 12 months I ended up resigning from the police and remained at the NRL. My two passions in life are investigation and rugby league, so to combine those it makes it a rewarding and challenging job.

People are always going to have an opinion on decisions for off-field behavior but I love my role. You certainly can't compare them. It's the same sort of skills and investigations, how you approach different matters that come across your desk, but on a much lesser scale to what I've been used to taking on.

They're also good enough to not ring me late at night or early in the morning – much different to when it was a 24/7 job in the force.

You remain around the current crop of players in the NRLW and Origin through assistant coaching – are there any players you wish you got the chance to play alongside?

I like that question but it's really hard because I am still involved. As a half, you really need a couple of reliable back-rowers. I had Renae Kunst to play alongside for a long time and she was exactly that.

So for the current lot, Kezie Apps is one that stands out – a good strong ball-runner, and Tazmin Gray from Queensland is such a talented and well-rounded footballer.

I'd also say any outside backs really – the Isabelle Kelly's, Jess Sergis's and Shak Tungai's – they're all amazing and would be great to have in any backline.

You’ve watched the development in the women's game both on and off-field over the past two decades – are you proud of the recent growth?

From 1998 to 2013 it felt like one step forward and three steps back each year. The 2013 World Cup was a big turning point for the Jillaroos and women's game, it's just gone crazy with some more media exposure, recognition, support, and professionalism the girls get now.

It has come far and it's pleasing to see that – the girls have got a great opportunity and pathway. I think we only have to look at the current COVID situation and it would've been a shame if the NRLW didn't go ahead but the fact it's still part of this year's schedule shows how far we've come.

Any aspirations to become a head coach one day?

Never say never but I love the balance with my current integrity work and the assistant roles with Queensland and the Jillaroos so it wouldn't be anytime soon. I just like staying in the background but still being able to assist the girls coming through the systems while still being able to travel and keeping a healthy balance in life. 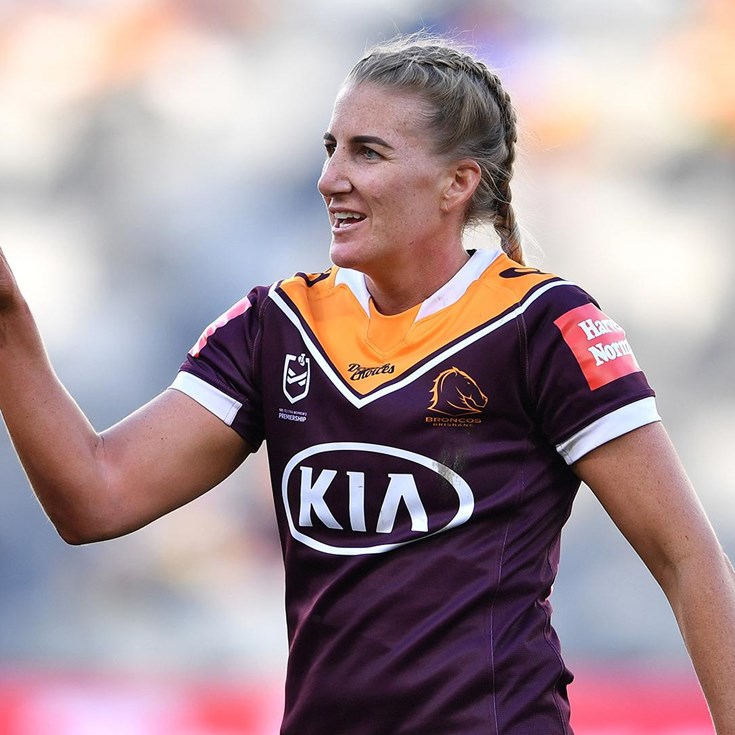 Presented By Rebel 7 hours ago

Temara's actions must speak loudly for Roosters to spring upset

Get Caught Up: NRLW Round 3