While almost 30 players from top-eight sides will put their feet up this weekend, Sonny Bill Williams's return to the Roosters leaves Trent Robinson with an embarrassment of forward riches and the mother-of-all finals selection headaches.

Robinson has famously given Lindsay Collins (2018) and Zane Tetavano (2019) his premiership ring after they were unlucky 18th men on consecutive grand final nights.

Robinson will rest Collins, lock Isaac Liu and centre Joey Many this weekend against the Rabbitohs.

But the champion coach then faces a difficult call for week one of the finals if all his troops are available for the post-season.

The successful injury comebacks for Crichton (knee) and Aubusson (wrist) have coincided with Williams's first NRL foray since 2014 - his comeback gathered steam last week against Cronulla when he punched out an impressive 48 minutes.

The strong form that has put Crichton and Collins in their respective NSW and Queensland Origin frames makes them likely members of a full-strength forward rotation, while a similar case can be made for Tupouniua.

Meanwhile Butcher's ability to back up Jake Friend at hooker matches up against Aubusson's all-round utility value, made plain in his record 303rd game being capped with two tries at centre.

Williams found his feet a little more with right-edge raids against the Sharks, with Robinson impressed by the 35-year-old dual international's build-up to more game time.

"Sonny and I talked before the game that I was going to leave him out there for as long as possible to get as much experience on the field in lots of different ways," Robinson said.

"So, doing good ball sets, deep yardage sets on the edge, in the middle, on the goal line and in yardage.

"All different experiences and combinations and just keep going to build the fitness.

"Let’s get as much as we can in each game, and I’ve really liked everything that he has had to go through there."

Captain Boyd Cordner is back in the line-up against South Sydney on Friday after the club took extra precautions in his return-to-play from concussion.

While the likes of Melbourne and Canberra have copped heat for resting 12 and nine regular first-graders respectively, Robinson has got his players' workload management down to a fine art in recent years.

Over the course of a condensed 2020 season the Roosters have come out the other side of a brutal injury toll to rest the likes of Friend, Cordner, James Tedesco, Jared Waerea-Hargreaves and Siosiua Taukeiaho in recent weeks.

Robinson refused to buy into criticism of rival clubs' approaches to round 20, pointing out no season before has had teams play 18 weeks straight without byes.

In the past three years, only four Roosters players – Victor Radley (2019), Blake Ferguson, Friend and Tetevano (2018) – have played through an entire campaign unchanged.

"Then you reassess that every couple of weeks with where players are at and if any unforeseen circumstances come along and where you're sitting on the table.

"There is a balance between knowing which guys you want to get some rest, and guys we have had a group out over a period of time only four weeks ago." 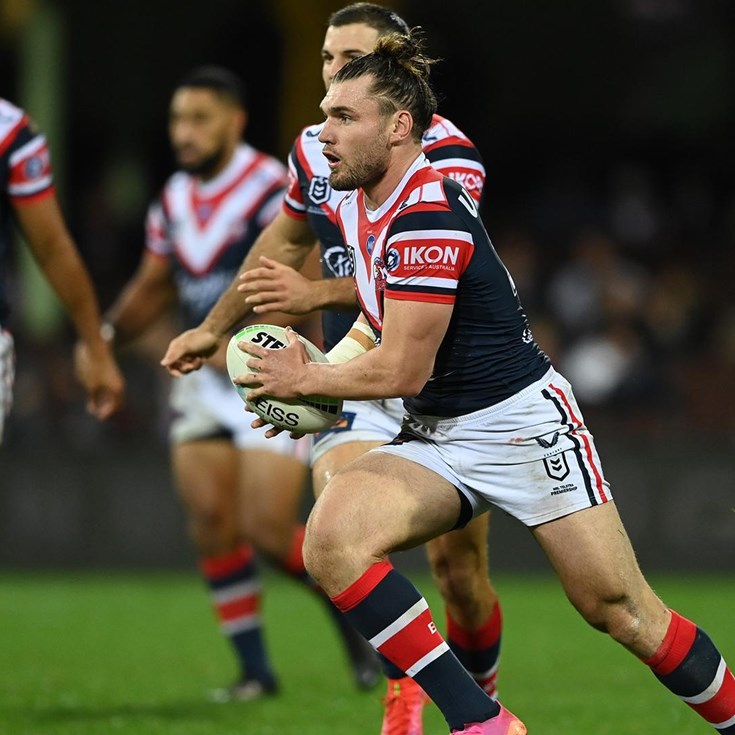 The hard-running lines Crichton has picked up from Cordner

Robinson laments: 'As a coach I didn't get it done'

Crichton using middle stints for next step in development