Rookie Canberra hooker Tom Starling continued his remarkable breakout season to lead the Raiders to a 38-28 defeat of Cronulla but the win came at a cost with English prop Ryan Sutton suffering a knee injury.

Starling, who has been a revelation since being called on by Canberra coach Ricky Stuart to deputise for injured England star Josh Hodgson after he ruptured his ACL in the round nine loss to Melbourne, scored a try and had a hand in three others.

"When Hodgo hurt his knee, straight away everyone counted us out but I remember saying after the next game when we won that now we have an opportunity to show you what is under the jumper," Raiders coach Ricky Stuart said.

"I couldn't be more prouder of this squad of players and where we have ended up in the competition because we get written off a lot.

"We love that in Canberra, getting pushed around and bagged. That is what makes us tough down there. We will just give the next game a crack and see how we go."

The Raiders suffered a further setback when Sutton was forced from the field after 26 minutes and Stuart said he had initially been diagnosed to have suffered a high-grade MCL tear.

"He just can't take a trick the poor bugger, he has had a wonderful year and after missing out on the big games last year he was all ready to go for the play-offs," Stuart said. "That's the part of coaching and footy I hate. It's a cruel game at times."

The loss of Sutton was offset by the successful return of veteran prop Sia Soliola after suffering seven facial fractures in a head collision with St George Illawarra forward Blake Lawrie three months ago.

Popular Raiders halfback Sam Williams also enjoyed his first appearance of the season after captaining an almost unrecognisable Canberra team to a seven-tries-to-five win and finishing with a personal haul of 14 points from a try and five goals.

"He is a Raider, he is one of us, he is the son-in-law of one of our greats in Ashley Gilbert," Stuart said.

"Sam is one of our favourites here in the squad. He is a halfback who leads by direction and voice and communication. I was very happy for Sammy to get an opportunity and it is rewarding for him."

In anticipation that the two teams would play each other again next Saturday in a sudden-death final at GIO Stadium, Stuart took the opportunity to rest nine players and his Sharks counterpart John Morris made five late changes for the match.

With many players either making their first appearance of the season or barely having played this year, mistakes were expected but it was a mix-up between two Sharks who have been regular members of the team which put Cronulla under early pressure.

After fielding a kick at the end of Canberra’s opening set of tackles, Sharks fullback Will Kennedy passed to Ronaldo Mulitalo but the winger wasn’t expecting the ball and put it down in front of his posts.

A repeat set after Kennedy was trapped in-goal from a Williams grubber led to the first try of the match when Raiders prop Dunamis Lui crashed over in just the third minute.

Williams puts it on a platter for Cotric

Remarkably, it was Lui’s fifth run with the ball and third in the set, whereas the only tackle the Sharks had possession was the one in which Kennedy and Mulitalo almost collided.

By the time Lui was interchanged after a 28-minute stint he had carried the ball for 110 metres from 14 runs.

In between, Mulitalo had replied with an eighth minute try after Kennedy chimed into the backline to create an overlap and threw a cut-out pass but the Raiders led 24-4 when Lui was replaced after tries to centre Nick Cotric, Williams and Starling.

Starling sizzling as he creates a try for Williams

Cotric scored in the 21st minute after pouncing on a Williams grubber and Starling burrowed over from dummy-half three minutes later following a long-range break from inside his own half earlier in the set.

Another run from dummy-half led to the next Canberra try after he dummied his way through the line and kicked ahead for Williams to score in the 28th minute.

Sharks second-rower Briton Nikora reduced the deficit to 24-10 at halftime after winger Nene Macdonald outleapt Semi Valamei to claim a Connor Tracey cross-field kick and offloaded for the New Zealand international to score in the 36th minute.

Kennedy had a try disallowed in the 43rd minute and the Raiders again made the home team pay when Starling put rookie Kai O’Donnell over two minutes later.

When five-eighth Matt Frawley, whose last NRL match was more than two years ago for Canterbury, stepped his way over to score in the 52nd minute the game appeared to be all but over.

However, Sharks skipper Wade Graham had other ideas and put his side back in the contest after picking up a loose ball and forcing his way over for a 56th minute try.

Macdonald offloads it to Nikora

A Bryson Goodwin try from a Scott Sorensen off-load just five minutes later reduced Canberra’s lead to 34-22 but any hope the Sharks had of snatching a late win appeared to disappear when Harley Smith-Shields fielded a short goal-line drop-out and ran unimpeded to the try-line in the 64th minute.

Nikora got his second try three minutes later but the Raiders survived the sin-binning of New Zealand second-rower Corey Harawira-Naera to hang on to their 10-point lead.​ 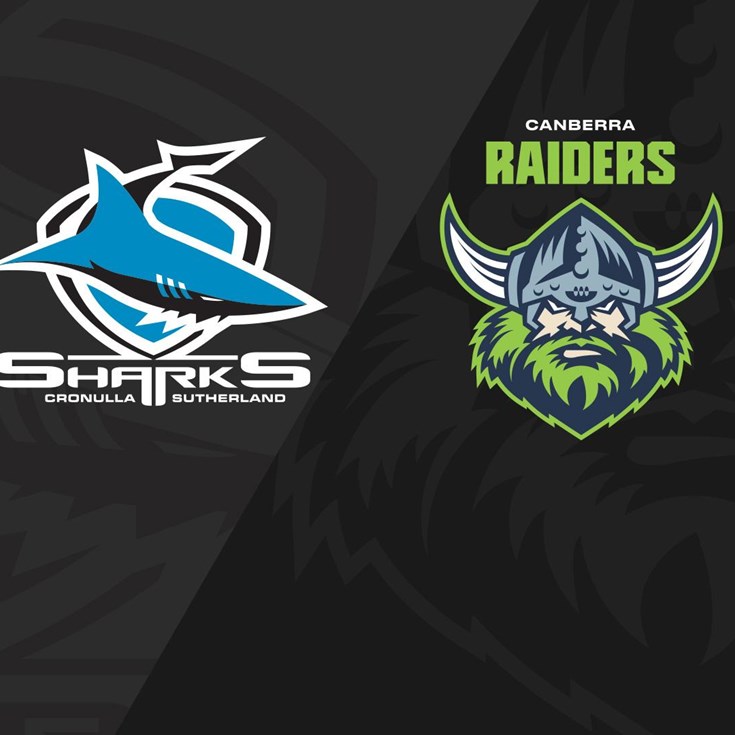 Kai O'Donnell gets his first try in the NRL

Mulitalo answers back for Cronulla