Tom Starling was simply super in the final week of Fantasy for 2020, joining the 100-club with a dynamite 80-minute effort while plenty of head-to-head league finals no doubt swung on some poor scores from a few players of whom better was expected.

With very few NRL regulars around him, Starling was explosive in his team's win over the Sharks. His running game sliced open the Sharks middle to the tune of three line breaks, three try assists, four busts and a try to go with 48 tackles in his 101.

The record-breaking points avalanche heaped upon the Roosters by the Rabbitohs led to excellent scores for Cody Walker (96), Alex Johnston (80), Adam Reynolds (77) and Cam Murray (63).

Cam McInnes (83) proved to be the best of the likely captaincy options after returning to hooker, producing four busts and two try assists on top of his usual defensive workload (45 tackles). His teammate Tyson Frizell finished his Red V career on a high with two tries and 82 Fantasy points.

Starling sizzling as he creates a try for Williams

AJ Brimson was particularly impressive given he produced his entire score in the second half having struggled to the break with zero Fantasy points.

Luciano Leilua and Jarome Luai (both 68), Moeaki Fotuaika (64) and Zac Lomax (55) were among the other popular buys to hit overs in round 20 while Chris Randall's 39 would have been welcomed by many given he played off the bench.

Luke Thompson has been a dismal Fantasy buy but at least finished on a high with 66 after Aiden Tolman was injured in the warm-up, with the British import playing a season-high 69 minutes.

Kotoni Staggs (6) sadly suffered a ruptured ACL in Brisbane's loss to the Cowboys while Jake Friend (2) was concussed early on against Souths.

It was a bad week to have Knights stars Kalyn Ponga (21) and Mitch Pearce (38) as uniques while Jamal Fogarty (24) unusually had no attacking stats and David Nofoaluma (23) busted just one tackle in 80 minutes.

Ryan Papenhuyzen (41) made an impressive injury return but was given an early shower, Jazz Tevaga (33) had no busts and lower than usual minutes, James Fisher-Harris (28) never came back for a second stint, and Tommy Talau's 26 would look more serviceable if you didn't realise that score included two tries.

All five Alex Johnston tries against the Roosters

Round 20 team of the week 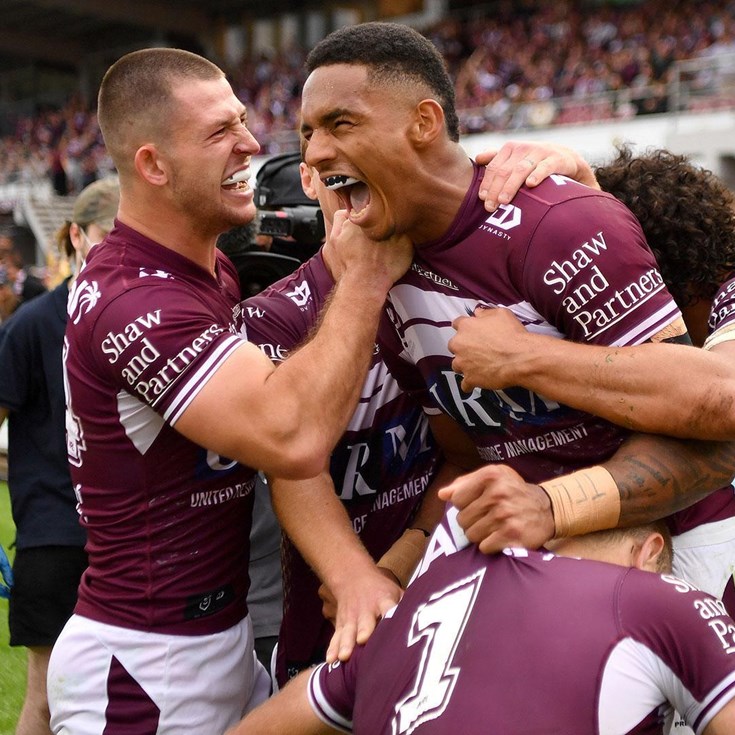