After back-to-back series wins the NSW team is looking reasonably settled but there will be changes forced by player departures, injuries and form.

With squad players starting to be named for the restructured 2020 State of Origin series, NRL.com Stats has crunched the numbers to take a look at how each team might line up for the November 4 series opener in Adelaide.

There is no question Brad Fittler medallist Tedesco will retain the spot unless he gets injured during the NRL finals.

Even if you were to ignore incumbency, Tedesco's stats make him easily the best option with the most metres, line breaks, line-break assists, tries and busts of any eligible candidate.

If Fittler does need to call on a fullback other than Tedesco, it will be a tight race between Eels skipper Gutherson and Storm livewire Papenhuyzen.

The pair are among the safest kick defusing fullbacks and busiest supporting fullbacks in the league and are almost dead even in terms of yardage gained.

Gutherson's ball playing gives him a strong edge; his 16 try assists are the most of any non-halves player in the NRL this year while his bigger frame and strong early set carries would seem well suited to Origin. Papenhuyzen brings spark and raw speed which can be vital in those crucial moments of a tight game but doubters will question whether his size is suited to the rigours of Origin.

James Maloney was the Blues' saviour in 2019 and leaves big shoes to fill. Walker got a taste in game one and while he didn't have his best game he finished the match well and is in better form now than when he was picked last year.

Keary was short odds to be picked over Walker in that series opener last year until an untimely head knock scuppered his chances. Now 28 and with three premierships, one Clive Churchill Medal as well as two Kangaroos jerseys to his name, he looks primed to take his chance.

Wighton is a bigger body and proved last year he is well suited to Origin. However, his likeliest spot remains in the centres where he can focus on his running game and add an extra kicking threat out wide.

An Origin five-eighth ideally needs to be able to take over the running of the team if the halfback is injured and selecting Wighton at No.6 could leave the Blues short of options in the game management department.

Although Wighton is the only one of the three who generally takes long kicks in game and is the best of the three at finding space with clearing kicks.

Keary has runs on the board in terms of what he has achieved over the Roosters' back-to-back premiership wins and remains one of the best support players in the game. His ball-playing in terms of try and linebreak assists hold up against the best in the NRL this year.

But if we're talking stats, the numbers give it to the in-form Rabbitoh hands down. If we add tries and try assists together, Walker's 27 try contributions are second best in the NRL, one behind Jarome Luai's 28.

His 14 line breaks are easily the best of the three, his 101 metres per game is outstanding for a half and he has the fewest errors. Souths have been up and down in 2020 but most of what they do well is off the back of Walker.

Nathan Cleary has had to field criticism about his Origin performances in the past, mostly around not standing up to control the game and lead from the front. In reality he has played the support role – predominantly behind James Maloney – to a tee, defending well and taking runs and kicks when required.

Still just 22, Cleary has truly blossomed in Maloney's absence at Penrith this year, guiding a youthful squad to the minor premiership.

He missed the series-clinching game three win last year due to injury with Pearce partnering Maloney but looks a shoo-in for game one. Not only have Fittler and the Blues invested in him, and he has not let them down previously, his form has exploded in 2020. That is borne out in the numbers.

Of the four most likely candidates, Cleary runs and kicks for the most metres and has easily the most line break and try assists. It's close but he also finds space with long kicks the most (an area in which very few players have excelled this year) and has the fewest errors.

Reynolds has been there before and his numbers are steady if unspectacular. His experience and polished kicking game will bring him into the conversation if something happens to Cleary.

Moses would have made a strong case for consideration if his 2020 numbers matched last year when he easily topped the league for try assists.

However, he has been hampered by a calf injury since mid-season which has impacted his running game, while his assists have fallen away significantly too. His team finished in third but Gutherson has been adding most of the polish. His time could still come but it does not appear it will be this year.

Pearce is technically the incumbent and his form this year, like that of his club, has swung between incredible and awful. Looking at the numbers across the season though, Pearce stacks up better than anyone other than Cleary. Pearce also has the best effective tackle percentage of the four at nearly 84%, though there is little gap down to the worst of the four, Reynolds at 81%.

He has the second most try and line-break assists and run metres of the other contenders. In fact, his try assists are virtually double either Reynolds or Moses this year.

Those numbers plus his incumbency could give him a strong edge if something happens to Cleary ahead of Origin I.

Like Cleary and Tedesco, Damien Cook is a near-certainty if fit given what he has done in his Origin career to date.

His running game is still the most dangerous of the likely candidates, though not by as wide a margin as the past two years.

Api Koroisau has been a revelation for the Panthers this year while Cam McInnes was rightly awarded the Dragons' player of the year award for his monumental efforts.

All three play 80 minutes more often than not and get through a huge defensive workload, with McInnes putting up the best defensive numbers in a strong field.

Stats-wise, McInnes's numbers, particularly in terms of run metres, have been skewed by spending half the season at lock, while his assists are the lowest of the three. Though even Cook with the best of the three is sitting on five line-break assists and four try assists.

McInnes's impressive season and versatility have helped him into Fittler's preliminary squad already so he is definitely on the radar but as to whether he or Koroisau is the most likely understudy to Cook remains to be seen. 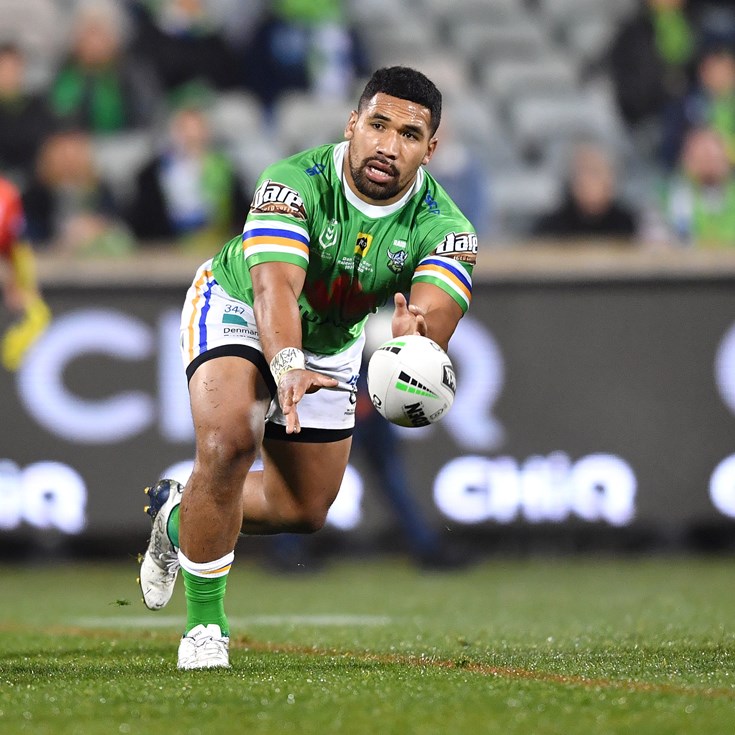