Clive Churchill medallist Jack Wighton has steered the Raiders to another grand final rematch with the Roosters, but only after a captain's challenge kerfuffle helped Canberra avoid one of the biggest finals upsets in NRL history.

For 45 minutes the Sharks well and truly sniffed blood in the water and held a shock 14-10 lead on Canberra's home track.

Five-dollar outsiders after being trounced by what was largely a Raiders reserve grade side last week, the Sharks came down the Hume Highway without any friends.

But they found plenty in a strangely off-the-pace Raiders defence given nine first graders returned to Ricky Stuart's line-up.

Cue Wighton changing the tune, as he has more than once this season, with two tries in three minutes, the pair of them equally eye-catching for very different reasons.

Wighton's first four-pointer came courtesy of a quick tap taken 15 metres out from Cronulla's line as their defence backpedalled, Andrew Fifita having been pinged for lying all over the Raiders star in a tackle.

Sharks captain Wade Graham called for a challenge immediately as referee Grant Atkins called play on from his own penalty ruling.

Wighton duly snuck past Graham and several teammates to score, with Graham arguing the point as Canberra took the lead.

"He's tapped the ball before any challenge was called … and it's ruck interference, which you can't challenge," Atkins explained to a ropeable Graham afterwards.

NRL head of football Graham Annesley confirmed by full-time that Atkins had followed the correct process; with the quick tap permitted that far out from Cronulla’s try line, a penalty the right call and a ruck infringement unable to be challenged.

Two minutes later Wighton was spoiling the unlikeliest of Sharks parties once more, again in the most spectacular fashion possible.

The Green Machine gun flew high for a kick from George Williams and latched on to the Steeden, juggling it twice on his way down before securing an eight-point advantage.

From there the Raiders were never headed, prevailing 32-14 before 9602 fans, with Wighton and Williams the difference more than others on the field.

"The two halves got us right back into it," Stuart said.

"They both played extremely well. I commended them on their performance to the boys downstairs.

"I don’t usually single out people. They threw the team on their shoulders. Basically took us forward. I love that in halves. You know, 'C’mon follow me'."

Canberra are expected to face the Roosters once more at the SCG, scene of their most stirring victory earlier this season.

They'll do so after one of their worst 40 minutes of the year, which had the Sharks circling their first win over a top-eight opponent, having been the first finals team in 25 years to qualify without one.

Had Blayke Brailey not been on crutches with an ankle injury by halftime, they may well have gone on with it.

Wighton gets a quick fire double

The No.9 was instrumental in Cronulla's early dominance alongside returning playmaker Chad Townsend.

It was the premiership-winning No.7 that set the tone in the opening minutes.

His early chip and chase would have delivered him a try but for his fumbled grounding, but it could easily have seen a 10-minute breather for John Bateman for taking out Braden Hamlin-Uele in that same pursuit.

After Townsend knocked over the resulting penalty, the Green Machine looked to rumble through the gears in response.

Joseph Tapine in turn rumbled straight through Cronulla's middle from close range, beating five toothless Sharks defenders in total as he stepped, then just carried the rest on his back for a 6-2 lead.

But with Cronulla still sniffing an upset they turned plenty of field position into points through Ronaldo Mulitalo.

With the resulting kick-off sailing dead the Sharks earned another penalty and an 8-6 advantage.

When Brailey latched on to an Elliott Whitehead spill to score in the 27th minute – crunching heavily into the goalpost as he did so – Canberra looked thoroughly cooked.

Williams picks off a Graham pass

Only a clutch intercept from nippy No.7 Williams, batting a Wade Graham pass up before streaking 60 metres, kept the Raiders in it at halftime with Stuart "amazed" his side was only down by four at the break.

Upon the resumption Wighton first spurred them into life with tries of his own, then set up Williams' second as the Sharks simply failed to move off their goal line.

Further points from Whitehead blew the scoreline out and the Sharks away before Sione Katoa jagged a 90-metre intercept with two minutes to play.

But the second half flurry belied just how close Canberra came to being on the wrong end of an almighty finals boilover. 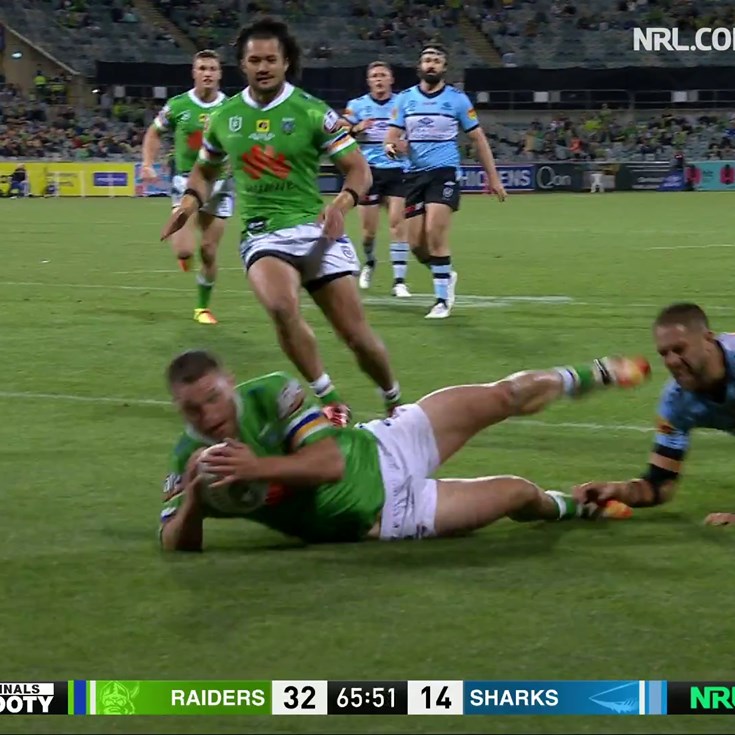 Croker puts a kick inside for Whitehead

Wighton gets a quick fire double