St George Illawarra coach Daniel Lacey has taken aim at Broncos forward Amber Hall for a tackle on Isabelle Kelly that could leave the star centre with a long-term ankle injury following a brutal match at Bankwest Stadium.

Kelly will require scans on her left ankle with Lacey left fuming about the 40th-minute incident to come out of a lacklustre 18-4 loss that ended their title hopes.

Hall, who underwent a 14-day quarantine to make herself available for the Broncos' campaign this month, pulled the hair of Kelly before using her body weight to land on the centre's leg.

The Kiwi Ferns representative was penalised for the hair pull but could come under scrutiny from the match review committee on Sunday for her second effort.

Lacey held grave fears for the short-term playing future of the 2018 Golden Boot winner, who immediately screamed in pain before being helped from the field.

"I don't think it's a reportable offence by the rules, but you've seen the consequences of what happened.

"I've lost my best player, my best outside back. She's shattered, she's in a moon boot. Just let go. It's all that needs to be said."

When asked if hair pulling was an issue in the women's game, Lacey indicated players knew the rules and repercussions.

"They can do what they want to do but they shouldn't get pulled by the hair. If you do, just let go.

"That [tackle] doesn't happen afterwards if you let go. It just doesn’t happen. So, let go."

Kelly's spot in the NSW Origin side now appears under threat with the major interstate clash scheduled for November 13 on the Sunshine Coast.

"As the medical staff probably think the worst then it's the worst," Lacey said.

"We'll just go downwards from there. She's probably no chance of playing another game. She's shattered.

Broncos coach Kelvin Wright said he had no issue with Hall being penalised for the hair pull but was yet to see further replays of the second part of the incident.

Of further concern for Wright is his captain, Ali Brigginshaw, also being placed on report for dangerous contact on Maddie Studdon following a kick.

"Ali's looked a bit late, again it looked a bit unfortunate. I'm not too sure, I'd have to have another look," Wright said.

The incidents aside, both sides are nursing further injuries ahead of next week's final-round clashes.

Kezie Apps (knee) joined Kelly on the sidelines, while Jessica Sergis and Maddie Studdon continued to play through with leg issues.

"I didn't see much in the tackles, so it could be that everyone's getting stronger and faster so the collisions are getting bigger," Wright said of all the stoppages for injuries.

"Again, probably just a bit of bad luck in amongst that as well, getting caught in awkward positions.

"We'll wait and see what the physios and doctors say and assess them at the start of the week." 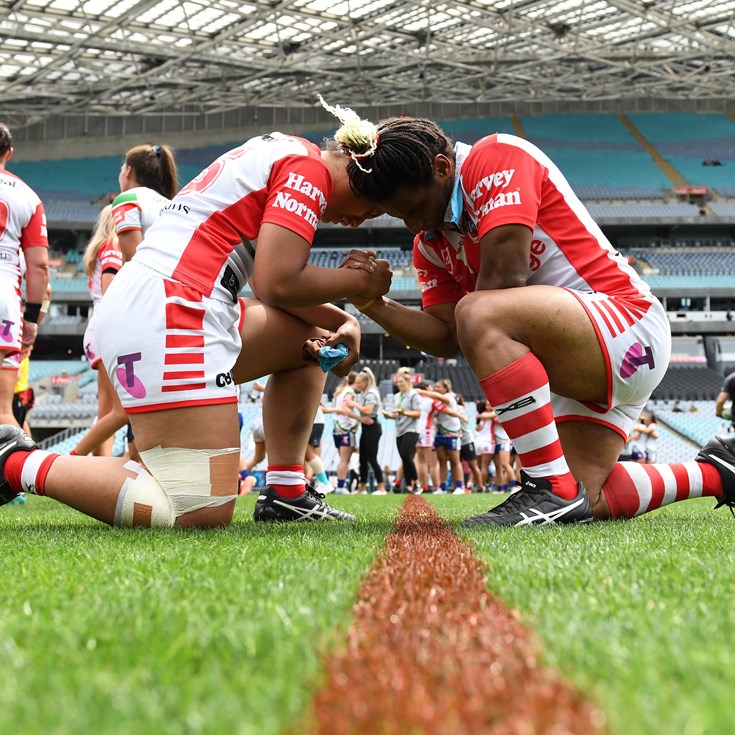 'I should've died': How faith drove Pauli back from devastation