Growing up in a household full of boys, it was only fitting that by the time David Gower announced his retirement this month he would have three little girls by his side.

Growing up with his two brothers in Ermington, Gower came through the Wests Tigers junior system like every other talented forward but hit a crossroads after a stint in Jersey Flegg.

The retiring Eels prop was self-admittedly not the greatest player ever produced out of Sydney's inner west but built his game around hard work.

A journeyman in his early days, Gower found a home under Eels coach Brad Arthur for seven seasons and is a prime example that it's never too late to make a solid career in first grade.

After 121 games and 11 seasons you've pulled up stumps in the NRL - how are you feeling?

I'm pretty relieved and happy that my career is over, to be honest, I'm looking forward to the next chapter. I've thought the last couple of years would be my final year and was keen on going back to the UK but I kept playing good footy in my late 30s and Parramatta were still keen to keep me on.

But once I got to this year the indication from the club was that if I retired last year I would've had a role this year.

It was more likely than not there was going to be a chance for me to transition into an off-field role with the Eels straight away. It was way too good to pass up with a young family so the timing was definitely right.

Your career started uniquely compared to other players in the NRL with an early two-year stint in the Super League in 2006, what happened there?

Yeah, historically NRL players head over in the twilight of their career as a bit of a hit-and-run mission and travel Europe at the same time. But I had a British passport and was working and playing so wasn't in that professional full-time environment.

It was a great opportunity I didn't want to pass up. It was either work 8-10 hours a day at work or head off to the Super League early.

I don't regret it at all,  I moved out of home for the first time and got the travel bug. I worked [out] what it took to be a professional footy player.

Growing up in Ermington, you return to Australia, got your one game for the Wests Tigers - nice to fit that in?

For sure, being a Tigers junior you always wanted to play for your home club. I played well in the reserve grade that year, I was player of the year, and it was the final round of the year. It was probably a bit tokenistic from the Wests Tigers.

They couldn't make the finals and I'd played an extremely good year so whether they felt obliged or not to debut me it doesn't matter.

A debut is something they can never take away from you. I had friends and family there and it was something I'll look back and treasure.

The raw intensity of the game caught me off guard. I was only a 93-kilo front-rower going up against some big boys in the Canterbury side.

You were caught in that in-between for most of your NRL career with reserve grade and first grade, how did you handle it?

I was definitely in that limbo stage. It was a bit of a reality check. I'd been playing 80 minutes in reserve grade in the middle and you'd always think well you're going well in that competition it should be the same in first grade.

But I realised how far off physically I was. When you're in your mid-20s you think you know a fair bit about the game but there was a fair bit I didn't.

You gain a lot of bad habits in reserve grade and then at first grade they don't get overlooked. I was too good of a reserve grader but then too small in hindsight to be a first grader.

I said that to Andrew Davey this year who finished the season fantastically. The difference between a really good reserve grader and first grader is the opportunity. It comes down to belief in yourself and the coach.

What about your move to the Dragons in 2011 - you managed seven games in two years ...

The team was fresh off a premiership. I'd signed mid-year so I knew early on I was going to play for them. I had my medical during the grand final week and they were in camp in Bondi.

You looked at the talent at the Dragons and even Manly's squad when I got there, the teams were brimming with Origin and international players. I came in willing to learn and kept an open mind.

Many people forget you were part of the 2013 grand final for the Sea Eagles - what was that experience like for you?

I had a little five-minute cameo, which I was grateful to be part of that grand final squad. It was unlucky for Richard Fa'aoso who broke his neck in the preliminary final. With 15-20 minutes to go, I thought I'm going to grab myself a premiership, how good is this?

I just remember sitting on the bench with a smile on my face thinking this is unbelievable. Then Jenko (Michael Jennings) started the rot with his try. All it needed was one more bounce and we'd probably win it.

The game was dead and buried quickly after but when you think about it only 34 players a year get the chance to play in a grand final and a lot of better players than me have never played in one so I was very grateful.

To be playing with the Stewart brothers, Jason King, Joe Galuvao, Brent Kite … guys that you grew up watching, it was quite incredible.

What sent you to Parramatta and made you stay because you spent seven seasons - the longest stint you've had at a club - with the western Sydney club?

I was actually in the final stages of finalising a deal with Wakefield on a decent contract but then Brad (Arthur) got the job at Parramatta and indicated to me that he'd look to bring me across with him. I'd just had my first daughter and wasn't ready to take my wife and newborn to the other side of the world.

I think I repaid their faith over a number of years. The supporters were great and I wore my heart on my sleeve. I was never the biggest, strongest, fittest, fastest or most skilful, but one of my strengths was I could adapt.

Every year the game changes and I think that's why I've been able to play until 35. The game changed to become your forwards needed to be a bit more mobile.

I had a reasonably high footy IQ and I think that helped. As the years go on our football players have to be smarter with how they see the game and understand you have to do more than what you're told.

You have to have thoughts yourself and do things off the cuff and to call moves [on] your own. To play 100 games for such a proud club is something I'll treasure.

You got the call-up to play for NSW City before the representative fixture was scrapped - what was that moment like for you?

I'd only played around seven games that year due to a broken hand so it was unexpected but they don't come around for everyone so I was excited.

I scored the first try and swore on national TV so it was great. Joey Johns came on to the field to interview me and I dropped the F-bomb.

What are you going to miss about the game and what are your best memories?

My favourite moments were at the end of every game my daughters came on the field to celebrate. That's something that will always stick out for me.

The grand final and also 100th game and 100th for Eels also stick out for me. It just took on a whole new meaning.

You'll step into a well-being role at the Eels from next season - what sort of influence do you hope to have at the club in that space?

My unique journey is going to give me some experience to hopefully make a meaningful difference with not only young players but NRL veterans.

If you fail to prepare you're going to prepare to fail. It's really important to have a second plan A if your career comes to end.

I want to be able to put tangible steps in place for players at Parramatta so when they come to the club they leave a better person. I think if we can improve the person I think we've done our job. I'll be caring about the person, not the athlete.

The athlete is the by-product of the person. 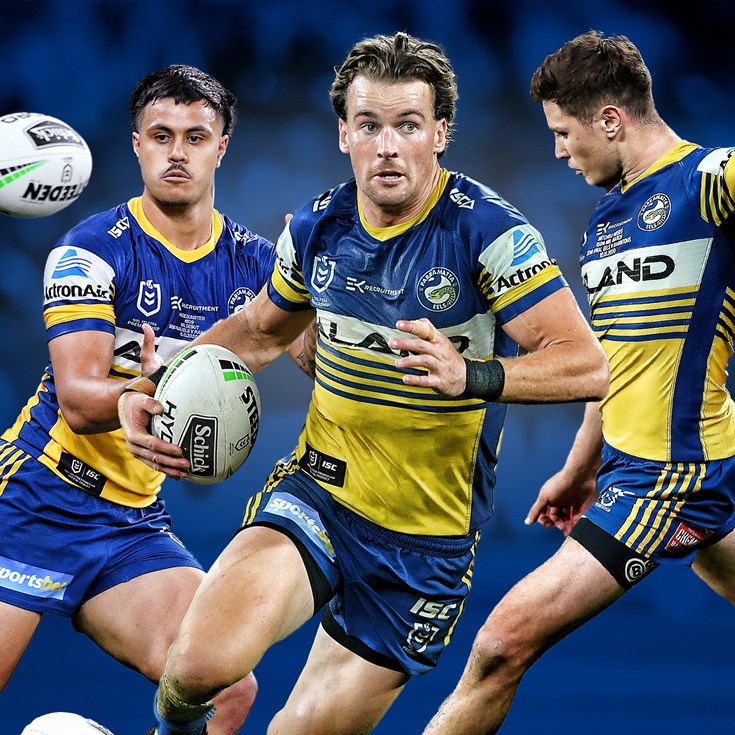 NRL Team of the Week: Jack, Josh and Joe spearhead a Raider rampage