Maroons captain Daly Cherry-Evans said a side set to field eight State of Origin debutants in the 2020 series opener has happily embraced the underdog tag.

Of the 27 players named in the Maroons squad only 10 have played Origin football. One of those is Cowboys outside back Valentine Holmes who is serving a one-game suspension and is unavailable for the November 4 clash at Adelaide Oval.

Cherry-Evans, speaking from Maroons camp on the Gold Coast, said it would be like the 2001 series when coach Wayne Bennett blooded 10 debutants in the opening game of a series won 2-1 by Queensland.

"I understood how much Queensland were underdogs that year and we are certainly going to be underdogs this year," Cherry-Evans said.

"It doesn’t matter which way you want to spin it. We are really going to enjoy that tag and enjoy the challenge ahead of us.

"I know I am certainly excited about it and talking to the boys in camp we can’t wait for what is ahead.

"There is a lot of inexperience coming into the side but certainly not lacking talent.

"As captain that is the most important part, to make people feel safe and comfortable in this environment. It is not a mistake that people have been picked in this side."

New coach Bennett and his Maroons are aiming to prevent NSW from winning three series on the trot.

Brimson tore Manly to shreds in the Titans' 42-24 win in round 19 on a day Cherry-Evans said he "saw the back of his jersey a fair bit".

Now the Maroons half is just happy that Brimson is set to join a new-look spine with Kalyn Ponga ruled out of the series due to a shoulder injury.

"AJ is electric. He is extremely hard to get a read on. A few of the boys were talking about playing him at the back end of this year and thought they were going to get him, and before they knew it he was gone," Cherry-Evans said.

"Speed is a very unpredictable thing in rugby league and I am glad he is on our side, but I thought the most impressive part of AJ's finish to the season was his defensive efforts. He was everywhere and extremely brave.

"The amount of time he puts his body on the line to bring down the big fellas when they break the line is the sort of stuff you want to see from your fullback."

As for giant Storm forward Fa'asuamaleaui, Cherry-Evans is just excited that he doesn't have to tackle him.

Brimson runs 80 metres to score from the restart

"He has got heaps of potential but I feel like he has got to the point this year where it is not about potential anymore. That is just the standard that Tino holds," he said.

"He has had a great season and was massive for the Storm last night [in the NRL grand final].

"We want him to show that he is up to this level of football but there is no doubt he has killed it at Melbourne. I am looking forward to playing Origin with him." 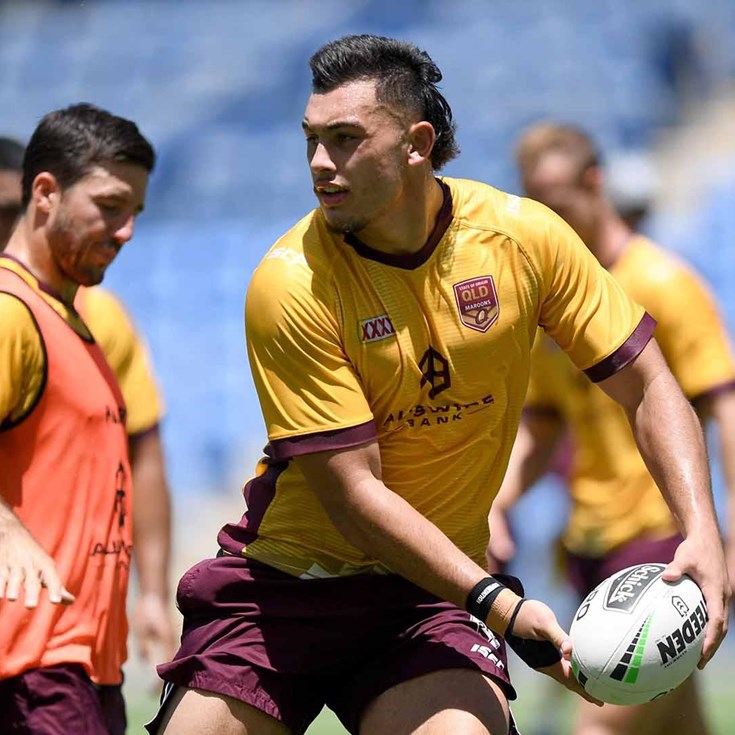 Maroons motivated to have last laugh after Gallen sledge: DCE