Midway through last year, before he'd tasted a minute of NRL action, Stephen Crichton watched a Blues training session and doubted he would ever be in their position.

"I was playing [under] 20s Origin and we were on the other side of the fence just watching them," Crichton told NRL.com.

"Back then, I reckon it was too far to reach. I didn't reckon I was going to make it."

Sixteen months later and Crichton has become a Panthers star, won a Dally M Centre of the Year award, played in a grand final and proved himself wrong by earning selection in NSW's Origin squad.

The 20-year-old centre travelled to the side's Wyong base at the Central Coast on Tuesday in a van with Penrith teammates Isaah Yeo and Jarome Luai before training with the squad for the first time on Thursday.

None of the rookie trio were included in the 21-man squad to be trimmed prior to Wednesday's series opener against Queensland at Adelaide Oval, but Crichton is simply stoked to be around.

"I'm here now so I'm just going to make the most of it and soak everything in," he said.

"Especially being on this side of the fence and training with them has been a massive blessing to me and my family.

"I didn't know that I was going to get the call-up. I thought I was going good throughout the year. Got the loss for the grand final, but this is a massive uplift just to come straight into camp.

"When the opportunity comes I'll just take it with two hands and take it on board. Freddie [Fittler, coach] just said to all the boys, 'Just be ready, anything can happen'."

Crichton, like Luai, comes from a Samoan background. He moved to New Zealand when he was two and then Australia a year later.

He said he hadn't thought about whether he would pledge his allegiance to NSW and Australia or Samoa, a second-tier rugby league nation, if there are scheduling conflicts next season.

But Crichton's passion for the Blues is unquestioned and he quickly set about getting acquainted with his high-profile teammates.

"They're here for a reason because they're all gun players. Just to train with train with them and even talk to them when we're back at where we stay, it's been heaps good," he said.

"I just like getting to know new people. I've been around the same people at Penrith [in the bubble] for a while and it's a good change."

True Blue: Keary adamant he’s happy as a Blue, not a Maroon

The lock has fond memories of Origin as a youngster.

"Just everything - the Wednesday night, the build-up. The old man [Justin Yeo] normally had training, so you'd be talking about it with all the first-graders," Yeo said.

"I was only a kid. I'd go home and there'd normally be a pizza night or something like that ... The Brett Finch field goal [in 2006], which I think he still talks about a fair bit, stands in my mind.

"I just remember how competitive they are and how much it means to the states. It's obviously exciting to be a part of it."

Alongside Ryan, who he "always had a soft spot for ... Dad knew the family a little bit, so I was lucky enough to get a few things signed", Yeo rated NSW coach Brad Fittler as his childhood Origin hero.

Both Yeo and Crichton spoke of pushing aside the disappointment of Penrith's grand final defeat to Melbourne for the good of the Blues.

"I don't think you can be dwelling on that in a group environment where so much is on the line and the games are so important.

"It's probably something I'll more so dwell on, I think, once this is all done. It's probably helped me take my mind off it a little and it'd probably be the same for the other boys," Yeo said. 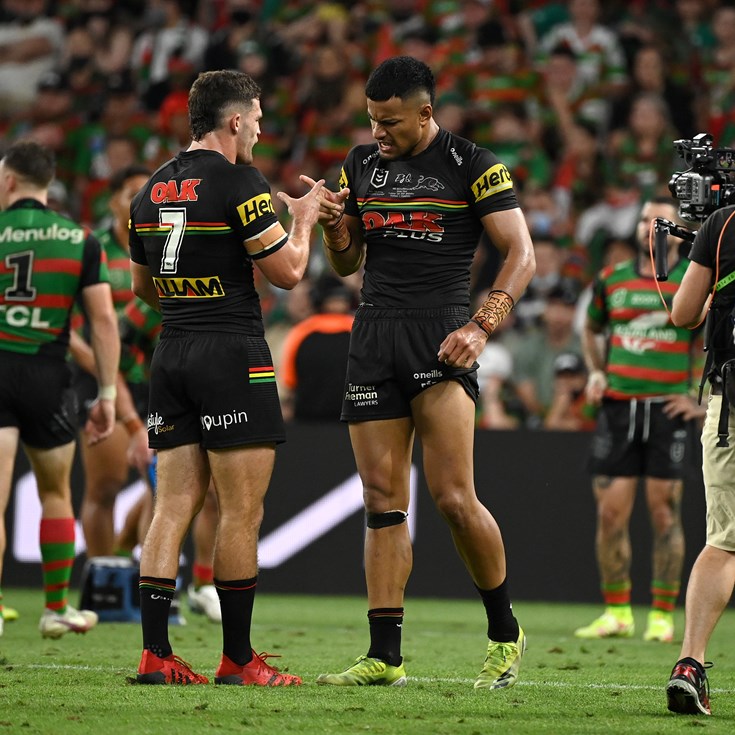 No longer winging it, Yeo sets sights on  forwards battle with Maroons