Jess Elliston still has her bad days but the difference in 2020 is they're no longer in complete control of her life.

Those days of waking up in the morning, staring at herself in the mirror and questioning where the imaginary body fat has appeared from when it wasn't there the night before.

The Maroons forward, who came onto the rugby league scene last year after growing up playing rugby sevens, is an open book when you first begin talking to her as she opens up on her battle with an eating disorder.

Dropping an F-bomb just a minute into the interview before unreservedly apologising, the 23-year-old has never been one to shy away from being herself and it may have just been the early detection that saved her life.

"It started after I finished school," Elliston tells NRL.com.

"I was playing rugby sevens at the time and started getting noticed by selectors who would say I'm playing well and was looking fit.

"Instead of accepting that, I would say well was I not looking good previously? I got into this mind frame where I would start to question everything.

"I would start to compare myself to everyone, and even now it's hard in rugby league because you see other players post photos of their bodies and they're so bloody ripped and I'm over here thinking I'll try and get there too.

"That's where you go wrong and the overall pressures that come with sport can really bring out the worst in you."

A hairdresser from Tweed Heads, Elliston would make sure she worked out for at least one hour every morning and would research the quickest ways to lose weight.

A 175-centimetre tall frame that suits rugby league's modern-day back-rower to a tee, her new-found routine meant she dropped to a size eight, losing more than 10 kilograms within a few months.

"And if I didn't work out every day I'd get anxiety," she said.

"Then I'd have some cruskit crackers for food. I'd have absolutely nothing to do with carbs – no bread, rice … nothing.

I got into this mind frame where I would start to question everything.

"If I had a sandwich, I'd freak out and call myself fat so I'd have some pumpkin soup at most. I would never let myself eat anything that I thought would make myself fat. I just thought for me to play I had to look like this all the time.

"I went into a chemist one day looking at meal replacements and the lady who served me said you don't need that for you but I still bought them and had them.

"Someone random called me a skinny girl to get my attention and I thought I don't like that so turned my attention to putting on muscle.

"Then I'd go to the gym to put on a bit of muscle but I would think it was fat and we'd do it all over again … the same processes."

Elliston's life began to spiral out of control to coincide with her weight loss.

Her partner, Blake Markwell, and immediate family were seeing the signs but it took Elliston some time to realise she was heading down a dangerous path.

"I ended up snapping and had major depression and anxiety," she says.

"I couldn't work for over a month, I couldn't get out of bed. I just couldn't take it anymore.

Home for a few days and then off again ! Can’t wait to be home with u full time again ❤️❤️

"I couldn't go through that again. That was my big snap. I went and saw a psychologist twice a week and she said you're in this cycle where you feel shit about yourself when you eat.

"It took me being in a bad way to reset and try to figure out how I'm going to be OK. I never thought I had an eating disorder but it all made sense once we put the pieces together."

According to leading eating disorder foundation Butterfly, over one million Australians are experiencing a form of eating disorder with only a quarter of those seeking treatment.

Recent studies have also shown sportspeople are twice as likely to develop a form of the illness given the pressures around diet and performance.

Two years on since the diagnosis and Elliston remains a work in progress with the Broncos playing a part in aiding her nutrition through club physiotherapist Carly Jennar.

The Brisbane-born forward also takes anti-depressants daily to help with her mental health but is open enough to concede she still has her days where she worries about her appearance.

She'll still go to a pub, order a steak with chips and vegetables, only to pass the chips (carbohydrates) onto others.

Don't stay on the sideline, convert downtime into mate time

But the difference is now she is aware of the thoughts inside her head.

"I'll eat the chips if I have a beer because then I'll feel more relaxed," she grins.

"But it's taken me a couple of years to be that relaxed about what I eat and not have that anxiety.

"I still get a bit hesitant but I'm certainly nothing what I was like before. I know how to cope with it and my support network are awesome and aware of it too."

Elliston said it may come as a surprise to some of her Maroons teammates.

"If it takes me being open about it, it might bring that one person out saying I have this problem, too, possibly to even a worse extent," Elliston said.

"I joke about my anti-depressant tablets being my crazy pills but I like to keep it open and make it fun because if there's one thing you can do is be really positive and that's how I go about it."

Elliston will run out in her second appearance for the Maroons on Friday night after getting a taste of State of Origin last season following a switch from the sevens scene.

A self-confessed newbie to the code, she continued to learn on the run after being picked up by the premiership-winning Broncos in 2019.

"Coming into camp last year I had no idea what I was doing and to be honest I was surprised I didn't stuff up more," she laughed.

"I spent the whole off-season trying to learn a lot of technical things so I could try and get somewhere in rugby league.

"I've still got Jase [Queensland coach Jason Hetherington] yelling at me a lot when I'm not in position so I always think 'oh shit' and move to where he is.

"But the coolest thing is along with him, [assistant coaches] Karyn Murphy and Nat Dwyer they've all pulled on the jersey before and the way they talk about Queensland is awesome.

"I'd watched a bit of rugby union growing up with my dad, not league, so I wasn't too aware of the hype around it, but I just like playing and it's one of the proudest things to be playing for Queensland." 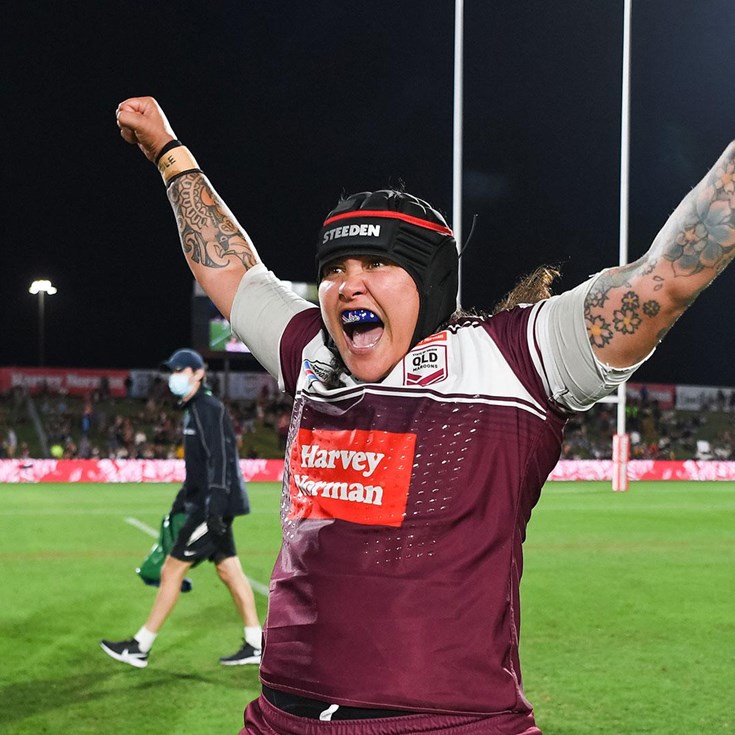