If a week is a long time in rugby league, Brad Fittler knows that is even longer in the State of Origin arena.

While a half-time speech from Wayne Bennett was behind Queensland's series opening win in Adelaide, the catalyst for NSW's 34-10 triumph on Wednesday night was a video review session after the Blues returned to NSW.

Fittler did his homework and NSW levelled the series before a parochial 36,212 crowd at ANZ Stadium with a game plan they should have employed in Origin I a week earlier.

With the break between Origin matches seven days for the first time in the concept's 40-year history, Fittler and his coaching staff knew there was little the Maroons could do to change their playing style.

In contrast, there were a lot of areas where the Blues could improve and they focused on doing that.

However, the NSW coach is aware that Bennett will now be trying to achieve the same outcome to prevent the Blues from winning a decider in Brisbane for the first time since 2005 next Wednesday night.

"I always think when you get beat that you assume there is going to be a reaction and I was pretty confident going in," Fittler said.

"It was great to give ourselves an opportunity to go and win it at Suncorp Stadium but there is always a reaction in State of Origin and we just need to get ready again.

"In the back of Queensland's mind I think there was probably a stage in the game where they thought let's get back up to Suncorp and see what we can do there, and that is what we are looking to do now."

Bennett said: "We lost it in seven days so I reckon we can get it back".

The loss of Queensland five-eighth Cameron Munster after hitting his head on the ground while fielding a kick in the in-goal area in just the third minute aided NSW's cause but it didn't change their tactics.

Nor did a melee midway through the second half, which ended with Blues prop Payne Haas motioning to his Queensland counterpart Tino Fa'asuamaleaui as he walked from the field in a ripped jersey after the pair were sent to the sin bin.

NSW halves Nathan Cleary and Cody Walker ran the ball more than Cleary and Luke Keary had done the week before. Cleary's kicking game and the chase of his outside backs kept the Maroons pinned down in their own end, and the Blues forwards outmuscled their opponents.

Hooker Damien Cook made nine runs from dummy half for a total of 79 metres, while captain James Tedesco ran 238 metres in 22 carries of the ball.

The Blues targeted the Maroons' left edge where Kurt Capewell was playing out of position at centre inside rookie winger Phillip Sami – something they failed to do in Origin I.

Ben Hunt found himself defending on the left side of the field too after coming off the bench to replace Munster and he was among the Queenslanders caught out when Walker and Tedesco scored their team's first two tries.

Walker swivelled out of an attempted tackle by Capewell and pushed away from Felise Kaufusi to score in the 17th minute and Tedesco stepped inside Hunt to score six minutes later.

Cleary was involved in both tries and after having a pass-to-run ratio of 6.5 in Adelaide last week, he took on the defence 15 times and ran 115 metres with the ball to finish with a ratio of 2.87 in Sydney.

Winger Josh Addo-Carr regularly led the kick chase, hitting a game high speed of 37km/h on his way to tracking Sami in-goal after Cleary kicked on the fourth tackle in the set before Tedesco's try.

Addo-Carr was rewarded with two tries of his own.

"The kicking game of our two halves was fantastic and obviously we started with a lot more intent, and that carried us through the whole game," Fittler said.

"Teddy and Cookie, I thought, did a wonderful job of picking the right play-the-balls and going through the middle with some speed. That was never planned, it was just two players taking advantage of the opportunities.

"Once we were under control we attacked in a lot of parts of the field that would have been hard to defend."

After making six errors in each half in Origin I, the Blues turned the ball over just once in the opening 40 minutes and Josh Addo-Carr insisted it was raked from his grasp so should have been a penalty.

The Blues completed 40 of their 45 sets of possession, while Queensland completed just 24 of 34 sets.

Fa'asuamaleaui (112m) and Lindsay Collins (105m) were the only Maroons forwards to run the ball more than 100 metres in Sydney but Bennett is likely to have prop Christian Welch available next week after recovering from a concussion.

Bennett was in a similar position at the start of his last coaching stint with the Maroons, when he took a team of rookies to an against-the-odds series win in 2001.

After springing an upset in the opening match, Queensland lost the second game 26-8 before regaining the State of Origin Shield at Suncorp Stadium in the decider.

"I don't think they would've lost a lot of confidence in themselves, they all know they can play better than they did tonight," Bennett said.

"It was more down to attitude than anything else. They just weren't there and were pretty happy with themselves after last week's victory obviously. 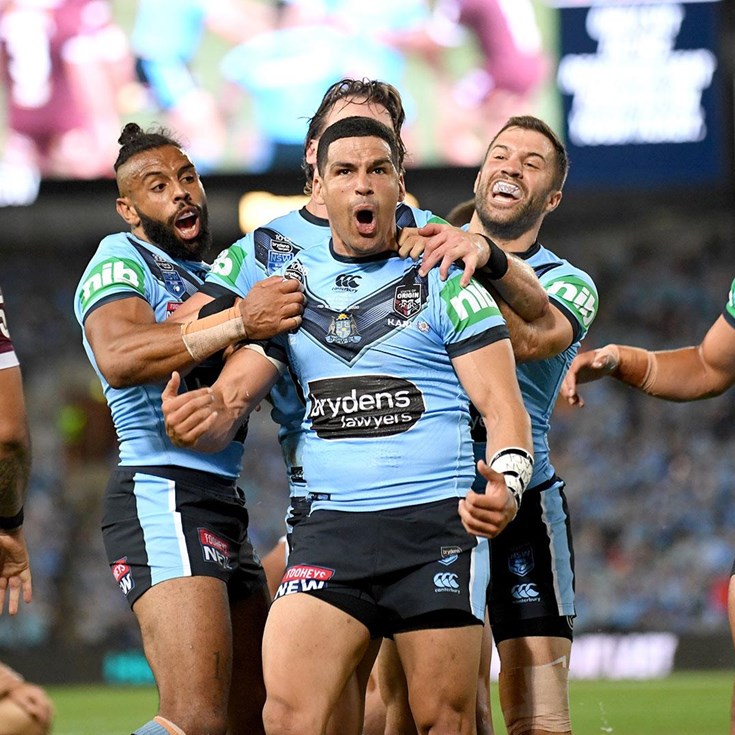 Arrow: We tried too hard, got 'a bit frantic'

The top tackles from Origin II

DCE keen to get to Suncorp