Fa'asuamaleaui and NSW prop Haas wrangled with each other in a fiery confrontation in the Blues' 34-10 win in Sydney and both were sin-binned for their trouble and later fined $750 by the NRL's match review committee for contrary conduct.

All eyes will be on the pair at Suncorp Stadium and Kaufusi has urged his former Storm teammate to maintain the rage, but in a targeted fashion.

"I expect them to go head-to-head. Whether or not punches will be thrown, I don't know, but they will be ripping into each other on Wednesday night," Kaufusi said.

"It will be good to watch that battle. [Tino] is aggressive and he is young.

Tempers flare as Haas and Fa'asuamaleaui sent to sin bin

"You definitely don't want him to lose that aggression, just be smarter… and smash [Haas] legally and rip into him with his defence or his attack.

"In the heat of the moment they are both very passionate people for their state. When things are going either way, people are going to fire up. That is what they did."

Maroons utility Ben Hunt, who has been dropped to the reserves for the decider, said Fa'asuamaleaui's aggression had the complete support of the team.

"I don't have a problem at all with anything that happened there. You want your big boys stepping up for your little fellas and that's what Tino did," Hunt said.

"I know no guys in our shed here would take a backward step and Tino just showed that. I'm happy they're both cleared to play."

Maroons skipper Daly Cherry-Evans was seen making a few points to the giant Titans-bound lock after the game.

"It looked like he was getting stuck in but I haven't asked him what he actually said to him," Hunt grinned.

"I know that Daly really appreciates Tino and what he brings. He's touched on that several times through the camp. I don't know if they were words of encouragement or 'pull your head in', you might have to ask him."

Kaufusi said the Maroons would be better in front of a sell-out crowd at Suncorp Stadium. With Cameron Munster expected to play and get through all the NRL protocols after being concussed early at ANZ Stadium there is another reason for Queensland to be buoyed.

"It was pretty tough to be honest," Kaufusi said of the Sydney experience.

"We came back with our tail between our legs and obviously there is a lot of improvement. In saying that we are all pretty confident in what we can do. The big positive is that we are playing in front of our fans at Suncorp so we will build as the week goes on.

"[Munster] is huge. Having him not there for the rest of the game, after his knock, was massive to us.

"NSW to their credit were relentless. Munny will go through his protocols this week and fingers crossed he can get through all that. I am sure he will be right but he just has to pass through all his tests." 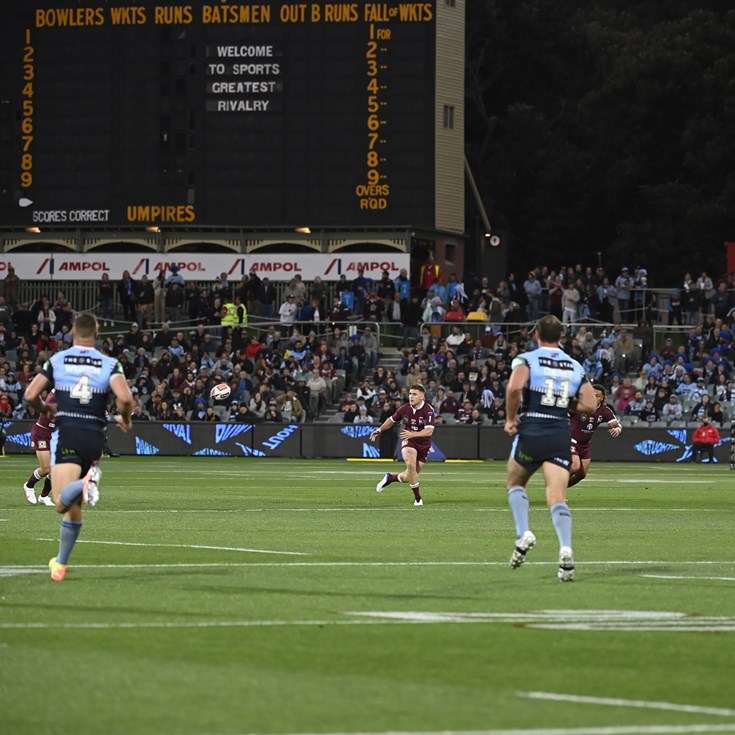