Queensland Maroons coach Wayne Bennett is a man of few words, but squad member Corey Allan was stoked to hear him simply say "you're playing".

The 22-year-old South Sydney Rabbitohs fullback said just to be in the Maroons bubble was a huge honour and he did not expect to play - "not even a little bit".

"Wayne told me about Game III... it was pretty short and blunt actually," Allan laughed.

"He asked me if I was ready and what I would bring. After my answer he said 'I'll sleep on it'. I hadn't heard anything for a couple of days and then just before we ran out for training the other day he just goes 'you're playing'. And I was like 'oh thank you'.

"Straight away my heart was pounding like it was game day. I was pretty excited. I'm pretty over the moon about it."

Allan said he called his parents and his partner, who were also "over the moon" when Bennett named him in the 21-man squad for Game III.

"This whole experience has been amazing... three great coaches. I'm lucky enough to have had Wayne before so I know what he's like. I've had Mal before as well. Actually I've had all three of them before," Allan said.

"They've all had something to do with me growing up, so it's amazing having them all here. Three great coaches. If you can't learn from them there's probably no one you can learn from.

"I thought me playing one game this season, I was lucky. I was happy getting game time, especially with the circumstances. So coming into here, I didn't expect to play... not even a little bit. I just thought I'd come in here, learn and have a good time in camp.

"Camp has been amazing. It's a good time making friendships with boys I've looked up to growing up. It's hard to explain but it's just an amazing feeling.

"Big Paps is a good bloke. A funny bloke too, Paps. I have enjoyed getting to know him.

"Now to get told I'm playing... I'm still trying to process it."

Allan, who took out the Rabbitohs' John Sattler 'Rookie of the Year' award in 2019 and was the first ever player to represent the Prime Minister's XIII before making his NRL debut, said he could not wait to rip in wearing maroon.

"Rugby league for me began in under 6s at Beenleigh Bulls... I played there for one year and then moved over to Logan Brothers and played the rest of my juniors there," Allan said.

"I just like the competitiveness and all of the mates I've made along the way as well.

"State of Origin has always been a pretty passionate thing in my household. We'd always get together, watch it, have pizzas. Mum and dad were crazy about it, so growing up with it, and now being in camp... it's pretty amazing.

"I looked up to Matt Bowen and Billy Slater... they were the main two. I loved watching them play growing up."

Allan said he was still shocked at what 2020 looked like for him.

"I wasn't really looking forward to a phone call... I was just chilling at home thinking 'I'm finally out of the bubble... I can have a life now'. Then I got a call and I was pretty shocked at the start. Told my parents and they were over the moon. That was it."

Allan, who has scored eight tries in 29 NRL games, said his aim come Wednesday was to "just play my best".

"If I can play my best then I'll be proud regardless. Obviously trying to win the series would be the best thing... but I just want to go out there and play my footy," Allan said. 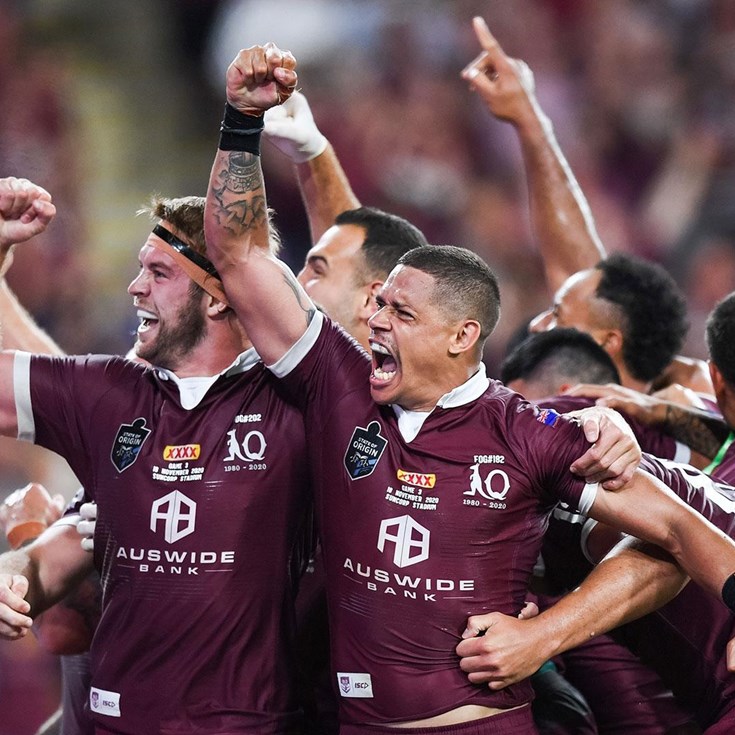 Re-live the 2020 State of Origin decider