In the first in a series of fresh looks back at the grand finals of yesteryear, we revisit the iconic 1997 ARL grand final between Newcastle and Manly.

NRL.com has gone into the vault to find footage of the grand finals from the pre-NRL era dating back to 1966 and will be showcasing these games, including a full replay, a mini version of each game, match highlights and great moments from these memorable encounters.

The 1997 grand final was unique in that it was the only year in Australian premiership history in which the competition was split - 12 sides lined up in the ARL competition while 10 teams competed in the Super League.

Manly and Newcastle were the dominant teams of the ARL - the Sea Eagles were the minor premiers, finishing three points clear of the Knights and Parramatta.

Newcastle qualified for their first grand final in the club's 10th season after eliminating North Sydney while Immortal Bob Fulton's Manly side edged out the Roosters by a point to reach the premiership decider at the Sydney Football Stadium.

With captain Paul Harragon tireless up front, Andrew Johns making plays at will and fullback Robbie O'Davis collecting the Clive Churchill Medal for his two-try effort, the Knights stole the trophy from Manly 22-16 in the final minute when winger Darren Albert scored his legendary try, backing up a Johns scamper from dummy-half.

The star-studded Manly outfit led 10-0 midway through the first half after tries to John Hopoate and Craig Innes and took a 16-8 buffer into half-time.

Thankfully, it was the last game before rugby league reunited to begin the National Rugby League era and it will forever be remembered as one of the greatest grand finals in the sport's history.

There is no debate on this one. Andrew Johns's decision to not only go into dummy-half with seconds on the clock, when most halfbacks would set themselves deep at first receiver for a field goal, and then run the ball turned out to be a masterstroke.

The first marker defender, John Hopoate, goes the wrong way as Johns dashes down the blindside.

The other marker, prop Mark Carroll, goes with him, fearing a pass wide to Mark Hughes but Johns jinks inside and is tackled by centre Craig Innes but is able to offload, with the pass beating Daniel Gartner and forcing Manly fullback Shannon Nevin to slip.

His pass found Albert, the quickest player on the field, who sprinted into the gap from 15 metres out with an exhausted Carroll diving desperately as he crossed the line.

Inexplicably, considering the scores were tied and no seconds left on the clock, ran around under the posts to ensure the meaningless conversion went over.

Johns and Albert combine to win it for Newcastle

Andrew Johns and Darren Albert deservedly get plenty of praise for their last-minute effort to get Newcastle over the line but fullback Robbie O'Davis was the standout performer on the day and deservedly won the Clive Churchill Medal.

The Queenslander kept a calm head throughout the game for Newcastle, scoring a superb individual try in the 34th minute from a scrum win then levelling the scores with six minutes remaining after spinning over from close range.

"I could get killed tomorrow and die a very happy man. I shouldn't say it but before the game I thought it was out of our reach but this is what dreams are made of," he said in a post-match Channel Nine on-field interview.

"It's the best thing that's ever happened to anyone. I can't believe it. When we left Newcastle, I think most of the boys were in tears, people were lining up for 30km out of Newcastle," Knights captain Paul Harragon interviewed by Channel Nine straight after full-time.

In their last set before Newcastle's last-minute try, Manly ran the ball on the last tackle and winger John Hopoate was tackled around 30 metres out from the line. If they had put in a kick and pinned the Knights further downfield, the closing stages may have ended much differently.

It meant the Knights were able to work into field goal range and Andrew Johns took a shot, which was charged down, Newcastle regained possession and the ball went out to Darren Albert's flank.

He was tackled but stayed alert after playing the ball, trailing Johns out of dummy half for the most monumental support play in Newcastle history.

An old-school lock, he was not big on skill but was the heart and soul of the Knights from their foundation season of 1988.

In a sign of his selfless attitude, Glanville donated his grand final jersey to an auction to raise funds for cancer research in 2016 to support former teammate Mark Hughes after his diagnosis with brain cancer.

The entire city of Newcastle partied for days after their breakthrough premiership but there were no signs of a grand final hangover the following season when they won their first five games and ultimately finished second on the ladder behind the all-conquering Broncos.

They were upset 28-16 by Canterbury in the preliminary final to fall short of what would have been a promoter's dream grand final against Super League champions Brisbane.

After three straight grand finals, the ageing Sea Eagles went into a sudden decline and just scraped into the last spot of the 10-team playoff series for the 20-side inaugural NRL competition before being eliminated in round one by Canberra. 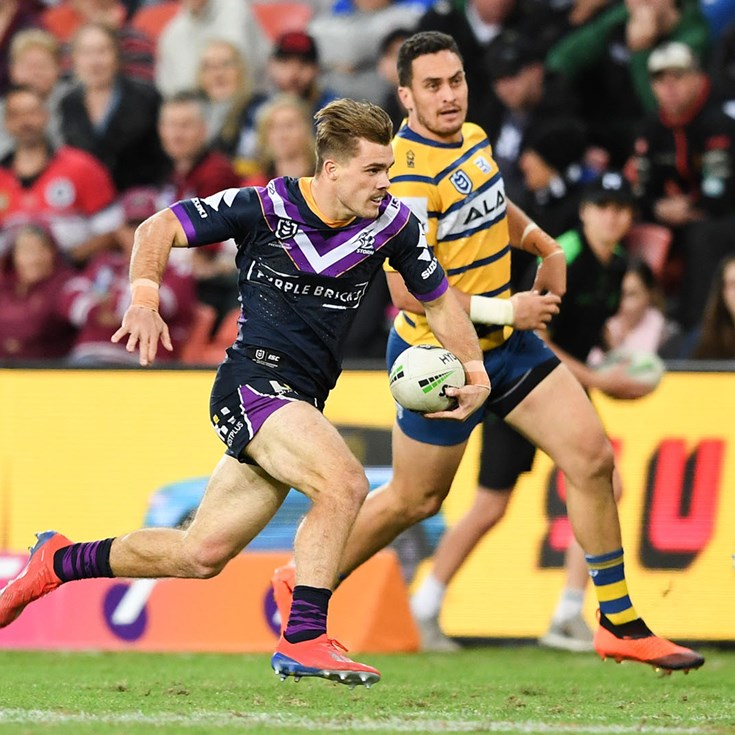 Magic Moments: Ponga steps his way over the tryline