In the latest instalment in a series of fresh looks back at the grand finals of yesteryear, NRL.com revisits the 1981 clash between the battling Newtown Jets and the star-studded Parramatta Eels.

NRL.com has gone into the vault to find footage of the grand finals from the pre-NRL era dating back to 1966 and will be showcasing these games, including a full replay, a mini version, match highlights and great moments from these memorable encounters.

A drought was going to be broken either way at the SCG on September 27, 1981 - the Eels had never won a first-grade premiership since their inception in 1947 while Newtown's last title was four years prior to Parramatta coming into the competition.

The Eels had gone close to finally claiming the trophy after finishing as runners-up in 1976 and '77, losing the second grand final via the first replay, but this was their time.

With the original super coach, Jack Gibson, taking over from John Peard, the Eels had formed a potent side.

Newtown were a fading inner-city club brought back to life by coach Warren Ryan and the acquisition of former Test halfback Tom Raudonikis as captain.

They went into the game without their forward leader Steve Bowden, who had been suspended for his part in a vicious all-in brawl in the preliminary final win over Manly.

Despite the odds being stacked against them, Newtown led by four in the second half on an extremely windy day at the SCG - it was gusting so badly that teammates held the ball on the ground while place kicks were taken.

However, the class of Parramatta's backline got them home 20-11 via tries to winger Graeme Atkins, Ella and Kenny with an intercept on the full-time siren.

Brett Kenny's final run to the line on full-time, an intercept which sealed victory is the most remembered moment of the match, but wasn't even his best try of the match.

From a scrum win deep in their own territory, Eels halfback Peter Sterling fed the ball to rampaging lock Ray Price - standing at five-eighth - and he made a long break downfield.

Price breaks the line to set up Kenny

As the cover defence chopped him down 25 metres out from the line, he flung a long pass wide to Kenny, who unveiled a goose step as he sprinted to the corner to evade Jets winger John Ferguson.

"The Bear", veteran Eels prop Bob O'Reilly was adjudged man of the match for his tireless efforts.

Even though he looked much older, O'Reilly was 32 years old and in the penultimate season of his 15-year first-grade career which had hit the heights of state and national selection but until that day, had not included grand final glory.

He retired midway through the following year due to a knee injury with what was then a competition record of 284 matches in the top grade.

"Ding, dong. The witch is dead." Eels coach Jack Gibson's succinct victory speech when the team returned to Parramatta Leagues Club summed up the feeling among Eels fans that the club had finally shaken off the years of misery with their first premiership.

Unfortunately, some fans took their celebrations too far - a bonfire at their home ground, Cumberland Oval, spread to the grandstand, which was burnt to the ground.

They had to play at arch-rivals Canterbury's home ground for four seasons before they were able to christen their new base, Parramatta Stadium, in 1986.

With Parramatta clinging to a one-point lead late in the second half, an O'Reilly pass was knocked down by Jets centre Brian Hetherington and replays indicate Eels reserve Paul Taylor knocked on as he regathered the ball.

Referee Greg Hartley ruled six to go, Parra spun the ball wide on the next play and Steve Ella zipped over to score.

Quick hands gets Ella a four-pointer

Mick Cronin added the extras for a 17-11 lead to clinch the win in the age of three-point tries.

Kevin "Stumpy" Stevens had enjoyed a lengthy career with Eastern Suburbs and was supposedly over the hill when Jack Gibson brought him to Parramatta in 1981.

A former halfback, he was an under-sized second-rower but always played above his weight and didn't take a backward step on grand final day against the fearsome Newtown pack.

Parramatta continued on their merry way to be runaway minor premiers and far too good for Manly on grand final day, the second in their run of three straight titles.

For the Jets, they finished with a respectable 13-11-2 record to run seventh in the expanded 14-team competition which now included Illawarra and Canberra, but the foundation club was in financial peril and was forced out of the competition after the 1983 season. 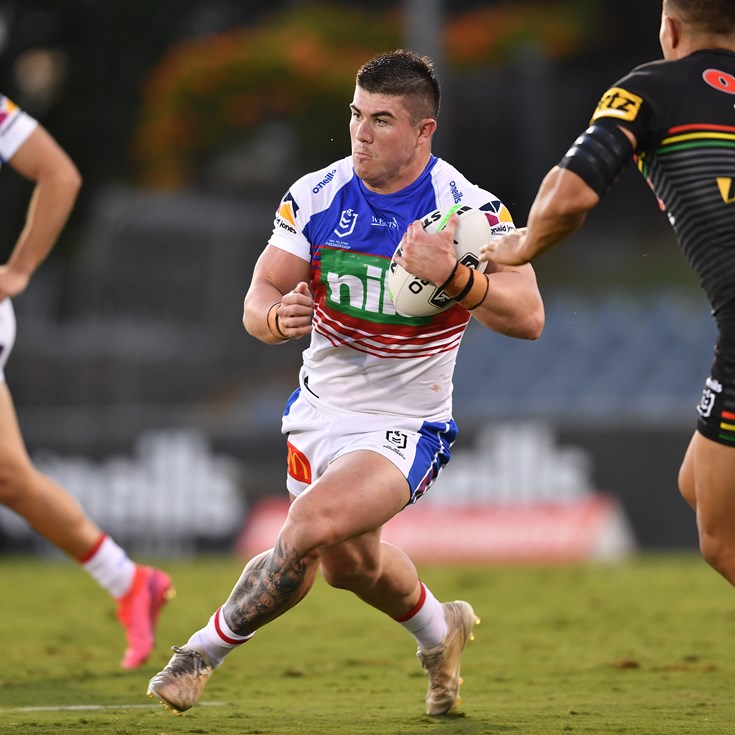 Presented By Ampol 3 hours ago