Des Hasler is set to sign off on a new contract extension that will put him on par with one-time mentor Bob Fulton as Manly's longest-serving coach.

Fulton's 307 games in charge on the Northern Beaches will be within striking distance for Hasler (after 252 games in two stints) once terms of his deal are signed off on in the new year.

Another 12 months beyond Hasler's current 2021 contract will have him rounding 300 games as Manly's coach, a two-year deal pushing him past the long-time Sea Eagles patriarch.

But it's another set of numbers occupying the mind beneath rugby league's most famous mop of hair.

19 – Tom Trbojevic's appearances for Manly in the past two seasons.

66 – Kieran Foran's appearances, from a possible 116 games in the five years since he was last in maroon and white.

181 – the average run metres differential that the Sea Eagles conceded to rivals last season, as their ruck defence and back three's ability to get out of trouble was badly exposed.

The Sea Eagles' 2020 season in review

After making great strides in 2019, then conceding most of that ground in 2020, Hasler has turned once more to his faith in sports science and statistics.

And, for the first time since returning to Manly in late-2018, the player market.

Few players across the NRL hold such sway over their team's fortunes as Trbojevic, who rivals Daly Cherry-Evans as the Sea Eagles' most influential individual.

When hamstring issues first troubled him in 2019, the club put their star fullback under the microscope.

"The basic testing showed that Tom has the strongest hamstrings in the club," CEO Stephen Humpheys told NRL.com.

But with Trbojevic's third tear in 16 months against Canberra in May, after which Manly's season largely hit the bricks, he and new recruit Foran were sent to Melbourne for far more exhaustive analysis.

Over the course of several injury-hampered seasons Foran has suffered back and hamstring issues that are believed to be linked, and so he joined Trbojevic and Sea Eagles physios at the Australian Catholic University for a week of testing earlier this month.

The results have been shared with researchers from the University of Wisconsin as well, experts who received a $300,000 grant from the NBA in recent years for their work around hamstring injury prevention.

Foran and Trbojevic have since returned to Manly's pre-season armed with new training exercises.

The club is also mindful of keeping the latter's training loads in check as he strives to put a frustrating two seasons behind him in 2021.

"But we are looking at everything we can and getting all the latest knowledge possible to keep them on the paddock.

"Tom's issues tend to be at the extremities of the hamstring connecting at either end and that's the focus.

"We want to make sure we're getting his training loads right. Tom's always so keen, if anything we have to hold him back at times.

"Our physio staff accompanied them on the visit and talked around pre-hab, rehab and passed across all the knowledge possible to ensure we left no stone unturned in their preparation for next year."

At sixes and sevens

Foran's signing reunites the 2011 premiership-winning halves pairing of he and Cherry-Evans, and forecasts a spine shake-up sorely needed last season.

With Trbojevic, hooker Manase Fainu and five-eighth/centre Dylan Walker sidelined for much of 2020, opposition defences were able to keep Cherry-Evans under wraps, particularly at the end of sets.

Hasler still has Foran in mind for a potential move to dummy-half given Fainu's unavailability under the no-fault stand down policy could last until his scheduled trial in July over an alleged stabbing last year.

If Fainu remains stood down Manly will likely apply for salary cap dispensation for a hooker or playmaker with utility value by March.

Regardless, both Foran and highly rated youngster Josh Schuster will play big roles in the Sea Eagles spine.

Foran's signing is understood to have raised concerns in Schuster's camp over his first-grade pathway.

Manly in turn have outlined the 19-year-old's long-term future at No.6 alongside Cherry-Evans, starting in 2020.

Schuster's late-2020 debut was declared by opposite number Benji Marshall as "the best I've seen in my time ever," and pointed to the talent that had rival clubs clamouring to sign him the Sea Eagles junior.

With Lachlan Croker and Cade Cust as back up, adding Foran to Manly's line-up is aimed at easing the playmaking and short kicking loads on Cherry-Evans.

The Sea Eagles were only able to force 23 drop-outs in 2020, ahead of only wooden spooners Brisbane (19), while they also conceded 16 seven-tackle restarts, the fourth-most of any side.

The need for speed and size

On the end of those attacking kicks, Manly faired little better.

As a result, Jason Saab was pursued for much of the season and eventually secured a release from the Dragons, while Christian Tuipolotu was also signed on a lengthy four-year deal from the Roosters.

Along with Tevita Funa, both will push incumbent wingers Jorge Taufua and Reuben Garrick for starting spots from the outset.

"I wouldn't say we were missing speed out wide, but you can never have too much of it either," Humphreys said.

"We've deliberately gone to the market looking at guys with that potential.

"[Saab and Tuipolotu] both boast an aerial threat as well. We were down in the bottom few when it came to scoring tries from kicks – that was part of the thinking with those recruitment decisions.

"Another six or seven tries from kicks across a season can make a big difference with the close games."

A fit Trbojevic offers plenty on kick returns, another area Manly's back three only surpassed Brisbane in with 321 metres a game in 2022.

Conceding an average of 1748 metres each outing, against 1567 gained on average, saw Manly losing their weekly yardage game by almost 200 metres.

Eighty-five ruck infringements, the most of any side, are no doubt well and truly on Hasler's radar.

The exit of Addin Fonua-Blake to the Warriors eases significant pressure on Manly's salary cap but also costs them easily their biggest metre-eater (167 metres a game last season).

His replacement Josh Aloiai did step up that area of his game markedly for the Tigers with more minutes, averaging 136 metres in 2020 compared to 75 across his previous four seasons.

But more will be needed from Martin Taupau (his 123 metres per game last year were well down on the 152 he has averaged since moving to Manly in 2016) and Jake Trbojevic.

The NSW star took on far more ball-playing in the latter part of 2020 – averaging an uncharacteristic 79 metres in the last six weeks, and ideally with Foran and Schuster in the frame can add more running back into his arsenal.

His efforts in the wrestle may also come under the microscope after conceding 13 individual ruck infringements last year.

That figure ranked him alongside Danny Levi (released by Manly), Cameron Murray (Rabbitohs) and Moeaki Fotuaika as the worst offenders under the NRL's new six-again rule, an area the Sea Eagles struggled with throughout 2020. 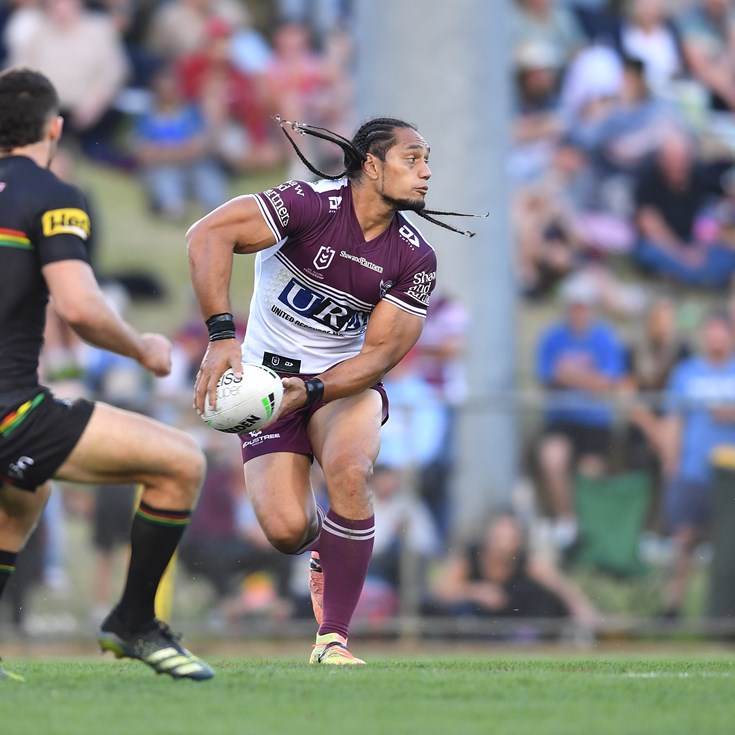