Latrell Mitchell crossed Anzac Parade to play fullback and may yet "get a bit fiery" as he prepares to square off with James Tedesco, the premiership-winning ex-teammate he wants to knock off as the best No.1 in the NRL.

A jovial Mitchell was well aware of Friday's date with "the old flame", the latest bout in the age-old Roosters-Rabbitohs rivalry, after his wet and wild ride in a round two win over Manly.

Mitchell had a hand in two tries, scored one of his own, was sin-binned and also in the thick of a full-time stink as South Sydney swam to their first win of 2021.

The 23-year-old has made plain more than once his ambition to be the game's best custodian, a mantle Tedesco has held since the pair were combining to deliver back-to-back titles to Bondi.

Mitchell has often risen to rare heights when confronted with mano-y-mano duels over his career – and another looms assuming Tedesco comes through his own face-off with old club Wests Tigers unscathed on Sunday.

Personal showdowns with Joey Leilua and Will Chambers saw Mitchell produce match-winning performances more than once in red, white and blue.

The Rabbitohs No.1 acknowledged his passion could well come to the fore leading into Friday's blockbuster, but said the stark difference in Tedesco's playing style meant he did not pick his brain on fullback play when they were Tricolours teammates.

"It depends if I get a bit fiery," Mitchell grinned when asked if he would be sending a private barb or two to his old teammates.

Tedesco backs up on the inside to grab a hat-trick

"I get really passionate about footy when I go up against old teams.

"I like watching him and seeing him play, but at the end of the day, I just focus on myself and my skill because I know I can get the job done.

"He's really nippy and fast, and I just love the physicality of being at the back and running onto the ball and executing passes – that's what I get joy out of.

"I create stuff out of nothing, so that's a good trait to have and doing that off the back of Cody [Walker] and Reyno [Adam Reynolds] is an awesome thing."

With Joseph Suaalii's defection in the opposite direction dominating summer storylines, demand for a new addition to Russell Crowe's Book of Feuds is mounting.

Jai Arrow's manhandling of a concussed Tedesco in November's Origin decider and the Rabbitohs' last-start 60-8 thrashing of their arch rivals set the scene for a mouthwatering showdown at Stadium Australia.

For Mitchell though, the focus is largely closer to home.

Roosters flyer Daniel Tupou is one of the few former teammates he makes regular contact with, while his diligence to rehab a season-ending hamstring injury saw him back on the paddock a month early and starting the year in impressive physical shape.

A return to the NSW Origin fold – which Brad Fittler would appear to be considering given his glowing appraisal of Mitchell's recent on-field form – and delivering a title to Redfern would surely loom large on his 2021 to-do list.

Mitchell makes the metres then sets up Johnston

"Secret," Mitchell responded when asked to elaborate on his goals this season.

"I can't give you everything. I've got to keep you guessing.

"I've got a couple of other things to achieve this year for my own personal battles, and I can't wait for them to come." 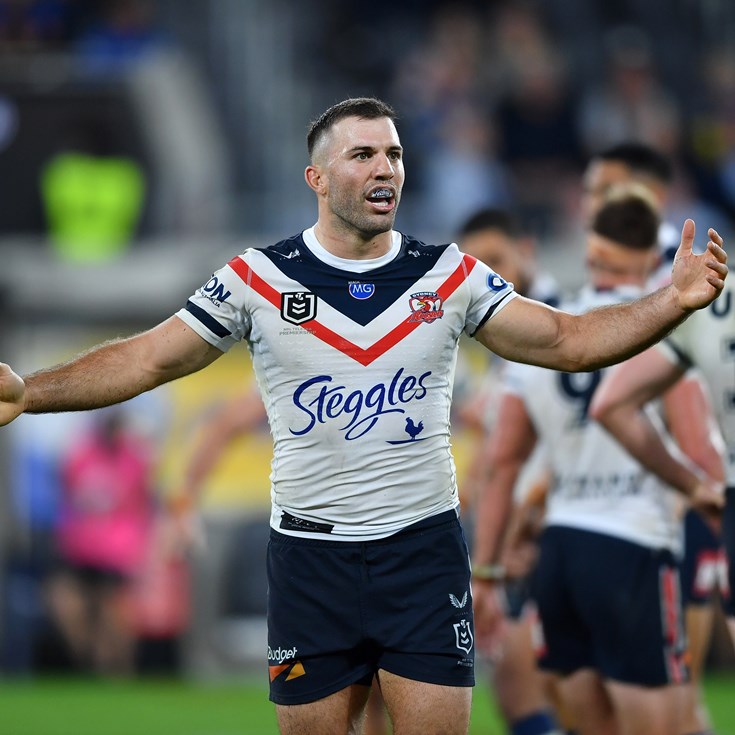 'If you see it, call it out': Latrell urges players to report online trolls