The Parramatta Eels emphatically ended a losing streak in Canberra that stretched back to 2006 as Mitch Moses orchestrated a dominant 35-10 win over the Raiders at GIO Stadium.

A double from Isaiah Papali’i sparked the Eels as they blew the Raiders off the park in the second half, sending 20,089 Canberra fans home unhappy.

But Eels coach Brad Arthur wasn't much interested in hoodoos or history at certain venues.

"I was just pleased we came with the right attitude and we chased the collision, we knew we had and we’re a better football team when we do that," Arthur said.

"We came here prepared to roll the sleeves up tonight and I’m disappointed, and I don’t want to dwell on it, but last week we wanted to play pretty fancy and we’re not that sort of team."

Canberra looked a chance to keep their imposing record over the Eels intact when they trailed by just two points at half-time (12-10).

But 23 unanswered second-half points from the rampant Eels sealed the deal as Moses capitalised on the power games of Reagan Campbell-Gillard (179 metres), Nathan Brown (153 metres) and Papali'i (153 metres).

A sloppy effort from Jordan Rapana to diffuse a bomb put the Raiders under pressure right from the kick-off.

The Eels didn’t need to be asked twice as Papali’i crashed over on the short side to make it 6-0 after two minutes.

Canberra responded not long after with a Jack Wighton cut-out pass finding Rapana, who made up for his earlier mistake to make the score 6-4.

Parramatta exploited the Raiders’ right edge defence for the second time in the first half with Maika Sivo strolling over to make it 12-4.

An Eels turnover inside their own 20-metre line allowed the Raiders to spread the ball to their left with an excellent cover tackle from Clint Gutherson stopping Rapana from scoring a second.

The Raiders soon split the Eels defence wide open up the middle in the 23rd minute, with a Josh Papalii offload finding Josh Hodgson with George Williams finishing off the successful attacking raid.

A spiralling bomb from Wighton saw Sivo spill it gifting the home side a perfect chance to take the lead before the break only to see the Eels defenders bundle Rapana into touch again.

Canberra sniffed out a chance to take the lead in the shadows of half-time when a Hodgson kicked ahead saw Bailey Simonsson win the chase to the ball, only to see his toe-ahead from 25 metres out go dead in goal.

Papali’i continued his sensational game to open the scoring in the second half with a beautiful short pass from Gutherson putting him over to make it 16-10.

"It's hard to single out one player but he’s going very well for us," Arthur said of the Warriors recruit who made 15 hit-ups and two line breaks.

“"talked about chasing the collision, that first try he scored, he purely did that because he wanted to score the try more than they probably wanted to make the tackle.

"He's learning the back-row role but he’s doing a good job filling in there and probably might be better suited in the middle. Some of the rewards he gets is built off the back of the work through the middle."

Simonsson failed a HIA after the Canberra winger was left dazed after colliding with Sivo’s knee as the pair contested a chip-kick, forcing the Green Machine to reshuffle their side. Back rower Ellliott Whitehead went into the centres and Curtis Scott to the wing.

Parramatta extended their lead after a masterful display with the ball passing through 10 sets of hands before it finally found Shaun Lane.

The Eels sealed the win with nine minutes remaining after Reed Mahoney scored next to the posts after a scrambling Raiders’ defence could not recover as the blue and gold side eased to a 28-10 lead.

Adding insult to injury, Moses slotted an ugly looking field-goal that ricocheted off the upright. But a final try to Gutherson had the Eels running out deserving winners. 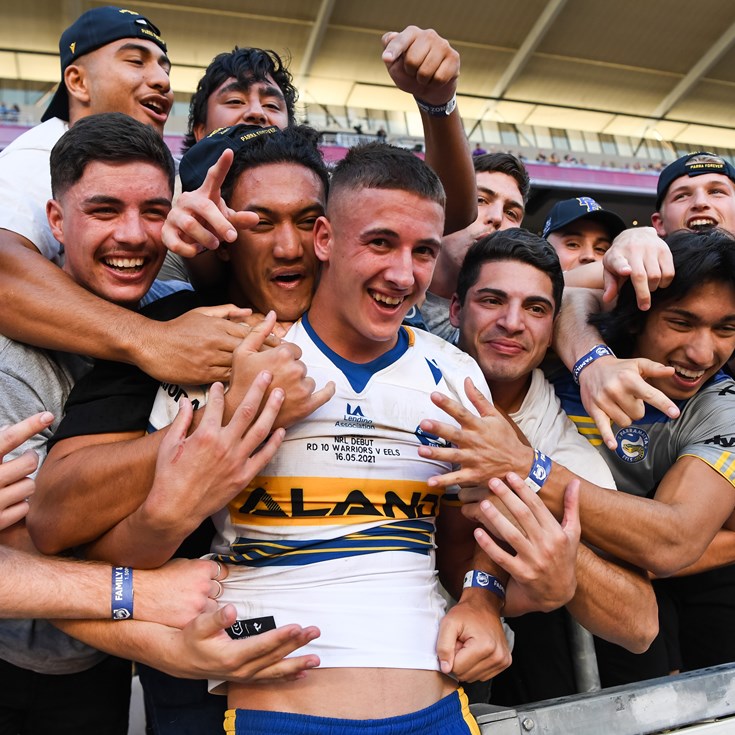