Eels enforcer Nathan Brown will have scans after suffering a suspected hip-pointer injury in Saturday night's comfortable 32-10 win against the Bulldogs.

While Clint Gutherson and Maika Sivo bagged doubles at Stadium Australia, Brown looks set to miss next round's heavyweight clash with the Roosters having slowly limped off before half-time.

Canterbury lost a key forward too with prop Dylan Napa playing only 16 minutes before succumbing to a shoulder issue.

Brown collapsed without being touched in the 37th minute as he turned to chase following an intercept, but Parramatta coach Brad Arthur said the star lock was hurt in a previous tackle.

"He'll have scans tonight, but it was more of a contact injury [from] the set before. So fingers crossed," Arthur said post-match.

"He got whacked on the hip, so maybe it's a hip-pointer. I'm not sure. He'll have scans tonight and we'll see where we get to."

Perhaps in good news for Brown, Titans winger Anthony Don copped a hip-pointer injury earlier this season - also leaving the field in considerable pain - but returned on Friday after only a month out.

There were initially concerns that Brown had done serious damage. A long-term injury may have impacted the off-contract NSW Origin forward's bargaining power in ongoing negotiations for a new deal.

Inspired by hooker Reed Mahoney charging down a clearing kick in the opening set and then setting up Gutherson's first four-pointer in the third minute, the Eels cruised to a 16-0 lead at the break.

Sivo crossed in the ninth minute after an Isiah Papali'i offload before Gutherson exploited some feeble defence to grab his brace.

But Canterbury, who hardly had any good ball in the first half, showed heart to narrow the margin to 22-10 at one stage.

Five-eighth Jake Averillo sliced through to get the Bulldogs on the board and Dallin Watene-Zelezniak followed suit.

Parramatta quickly put the result to bed with four-pointers to Marata Niukore and Sivo but Arthur wasn't entirely satisfied.

"For a 10 or 15-minute period there, we turned over the ball and came outside some of our systems in defence," Arthur said.

"We gave them a bit of a sniff and invited them back into the contest. [But] it's hard to win NRL games every week and it's a win."

Fullback Gutherson was enormous with 259 metres, three line breaks and a try assist to earn an eight-minute early mark.

"It's expectations, isn't it?" Arthur said.

"He's captain, that's what he's got to do. That's his job  ... he's reliable, I don't have to do as much with the team on game day any more. He takes full control of our messaging and what our plan is." 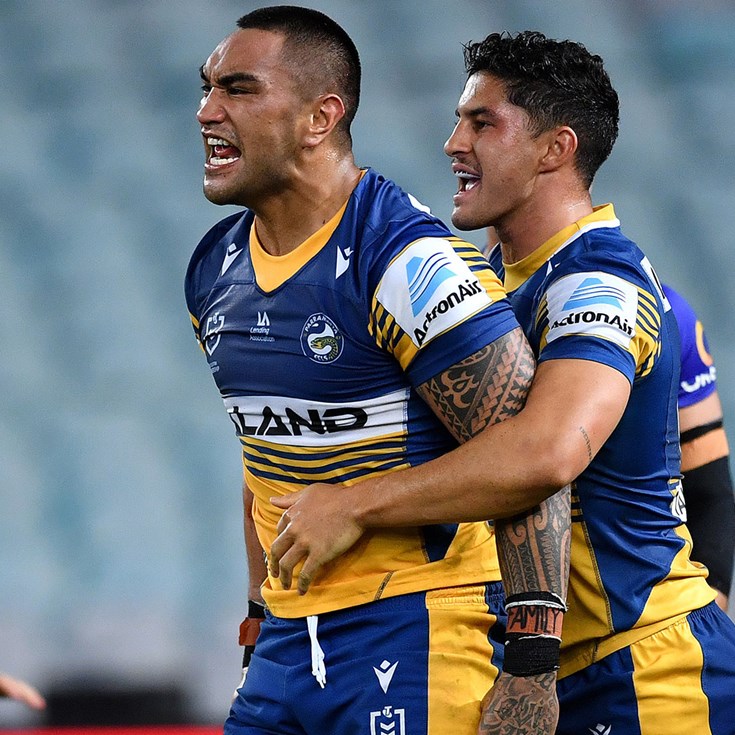