Three weeks ago the Dragons were flying high on the back of a four-game winning streak.

Now they're on the wrong end of a three-game slide and struggling to score points. That the Wests Tigers were able to outlast them in round eight is a cause for concern.

Now they face a Bulldogs side that proved two weeks back that if you give them a sniff they're good enough to win matches in this competition.

Canterbury endured an unhappy night against the Eels last weekend, but on current form the Dragons are a step down from that standard.

Dragons: Mathew Feagai will make his NRL debut in place of Cody Ramsey (rib) on the wing, while Junior Amone will also play his first game in the Telstra Premiership, via the bench.

Ramsey and Adam Clune dropped out of the extended squad 24 hours before kick-off while Poasa Faamausili was the last man cut an hour before kick-off. Jackson Ford is 18th man.

Dragons fullback Matt Dufty has scored nine tries in his past eight games at Kogarah.

Bulldogs: Lachlan Lewis and Ofahiki Ogden were added to the bench an hour before kick-off with Matt Doorey reverting to 18th man.

Dylan Napa (shoulder) is out, with Ava Seumanufagai starting at prop.

Dallin Watene-Zelezniak is back at fullback with Nick Meaney moving to the wing in a straight swap.

Napa and Joe Stimson were omitted from the playing squad on Saturday. Tuipulotu Katoa was cut an hour before kick-off.

The Bulldogs have won seven of their past nine games at Netstrata Jubilee Stadium.

Ben Hunt v Kyle Flanagan. Hunt was looking a rejuvenated man before breaking his leg and now that he's back he needs to recapture that spark.

Flanagan is learning the hard way that if your forwards aren't matching it with the opposition the No.7 jersey can be a tough one to wear.

If the men in front of him don't match it with the Dragons pack he could be in for another long afternoon.

Canterbury completed their sets at 79 per cent against Parramatta but generated just two line break and averaged just 33 metres gained per set of six. Their opponents - Parramatta - averaged 15 extra metres per set. 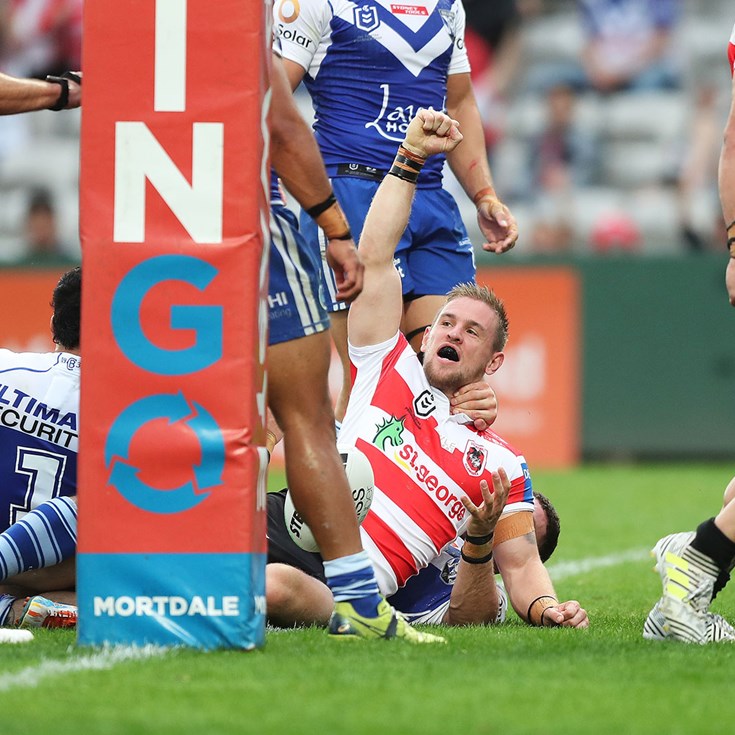