NRL players, and in particular Wednesday's Origin combatants, should honour the spirit of the game and take it upon themselves not to engage in any gamesmanship around trying to draw penalties, according to NRL head of football Graham Annesley.

With the NRL already indicating the recent crackdown on dangerous contact won't be put aside for Origin, Annesley used his weekly football briefing to both provide stats that show the message is in fact getting through to players, and also ask that players do the right thing and not play for penalties.

"This is one of the genuine games of sport," Annesley said, with a thinly veiled swipe at sports like soccer where players notoriously feign injury looking for penalties.

"There are some other sports where you might raise a question mark about how genuine some of the participants are in terms of playing the game in a fair and hard way.

"But I don't think that's what our game's traditionally been about. Hopefully we don't see any of it."

Annesley supported Maroons skipper Daly Cherry-Evans' call for a gentleman's agreement not to lie down in Origin but also hoped that the entire NRL competition would feel the same way.

"Absolutely I would support that and I would say 99% of all players adopt that attitude anyway," he said.

"It's a bit of a slippery slope to start lying down for those sort of tackles.

"It's an issue that's difficult to deal with. The match review committee does have the ability to charge players with what they might consider to be contrary conduct, conduct that's contrary to the true spirit of the game."

The players need to be the ones driving it because it is too hard for officials in-game to decide a player isn't badly hurt, he added.

"In the most physical version of our game which can be played, which is State of Origin, which is all about toughness and endurance and not demonstrating to your opponent you've been injured in any sort of way because you don't want to give them any kind of advantage by knowing they've hurt you or they might want to target you by running at you because you might be carrying an injury," he said.

"In that type of environment it's almost counter-intuitive that players would fake some sort of injury and I'd like to think that flows through to the NRL as well.

"Players need to be aware if it was to happen, whilst they might get some short-term advantage from it, it could equally work against them if other players decide 'we're all going to start doing it' because they'll be disadvantaged by it at some point as well."

Wests Tigers fullback Daine Laurie was one who was criticised for gamesmanship over the weekend, appealing for a penalty before briefly playing possum then bouncing to his feet after receiving a penalty. His captain James Tamou defended the rookie on Monday.

"There's no doubt Daine would've felt it and it would've hurt," Tamou said.

"If you get tapped around the head it's always going to hurt. These are big men we're playing. There's no such thing as a tap to the head because you're going into a tackle with such force.

"He would've got up because he wouldn't have wanted to go off for a HIA. If those things warrant a penalty then we've got to adapt to the rules.

"I think that's the teams and the players adapting to the rules. I know for a fact some players lose the ball in a tackle but regather it but you don't see a call.

"If you're going to go above the shoulders and sweep above the ears that's the consequence.

"There can be really taking it too far [with milking] but with studies around concussion you've got to take everything seriously.

"The referees and game are doing a great job around concussion and that sort of thing so as players we've got to buy into it."

Annesley produced some stats that show in the four weeks since the crackdown started, players have adapted and are producing fewer tackles that result in sin-bins or match review committee charges.

Looking at purely high tackles across rounds 10, 11, 12 and the split round in round 13, on-report incidents had gone from nine to 19 to 12 and back to nine and sin bins jumped from five to 12 back to five with just two in four games over round 13.

There had been three send-offs in round 10 and none since while the number of players charged by the match review committee for high contact had increased from 10 to 18 before falling back to eight, with just five in the four games on the weekend.

Annesley stressed there had been no letting up of the interpretation by the officials, with forceful high contact still resulting in sin bins; rather it was a sign of the players adjusting, he said.

"We're seeing far less of those types of tackles with direct, forceful contact," he said.

"We're still seeing contact with the head and neck but it's less serious contact; players are adjusting their tackling style.

"There are more incidents where the referees can penalise for minor contact and players aren't placed on report, transferring some of the more serious incidents out of sin bins and send-offs into penalties and placed on report.

"This is not because the referees have backed off, which is the immediate conclusion people jump to … if you go through the games we saw on weekend, any incident of direct forceful contact still resulted in a sin bin." 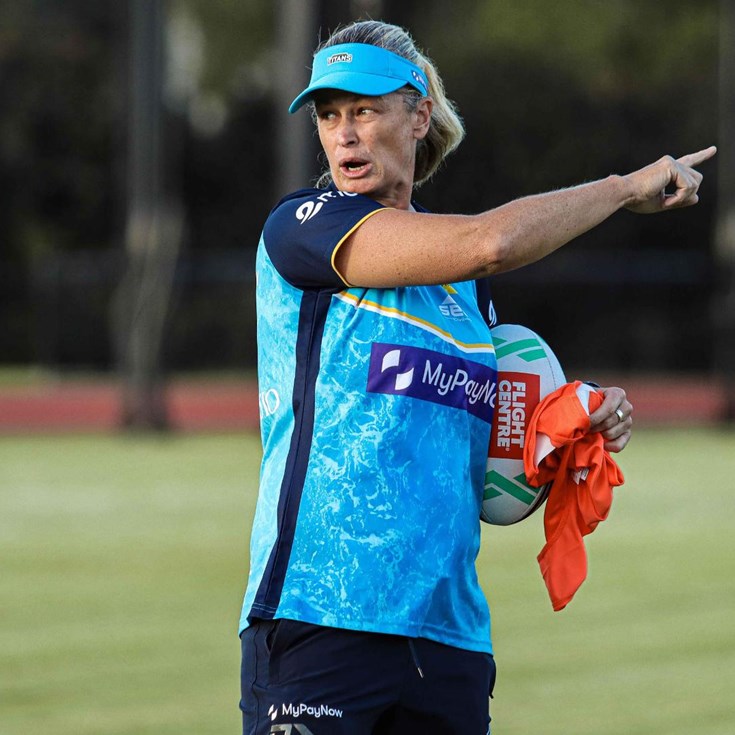