Martin Luai stood holding the sky-blue No.6 jersey on Sunday night in front of Brad Fittler and the Blues inner sanctum.

When he sat back down a few minutes later, he was kicking himself.

"I had to cut it short. I ended up sobbing halfway through, I just couldn't get any more words out," Luai tells NRL.com.

He wasn't the only one. Luai's son Jarome, the latest in a line of NSW five-eighths from Kenny to Daley, Fittler to Maloney, kept his head low for a long time.

For the Luai family though – mum Raumako, Luai's partner Bailey and his three younger siblings, heads have never been held higher.

Fittler's morning phone call to Jarome last Sunday was met with first disbelief – "dad's first question was 'are you sure? It wasn't a prank right?' " – and then tears in the family kitchen.

Fast growing famous in their own right over the course of Penrith's remarkable rise these past 18 months, Fittler invited the families Luai, To'o, Koroisau and Martin into Blues camp a week later for priceless presentations.

"I was fine until I stood up, and then I got star struck," Martin Luai says.

Beneath the bravado, the brash ball-playing and booming boom box, Jarome is still comprehending it too.

Right alongside him is what, or who rather, Martin sees as the reason behind his son's rapid rise to the game's highest level.

The cute mop-haired kid seen slicing and dicing a cake with Fittler on Sunday night, then holding that famous No.6 with its latest heir.

Martin missed Israel's birth as he spent two years in prison on drug-trafficking charges, watching his son's NRL debut from a Brisbane jail cell in 2018.

So cutting cake with the coach doesn’t get much sweeter. Or more overwhelming.

"Becoming a father so young made him grow up so fast and mature.

"But it's come at the same time as his career maturing so quickly.

"When he's playing for his family like that it's easy to see.

"I had all this planned out to talk about, it's a massive deal for us as a family and we're all so proud of him. But it just got the better of me.

"I looked over at Jarome and he had his head down too and that got my emotions going as well.

"It's not like it's anything I haven't said to him before though, he knows how proud we are and what it means.

What Martin was able to tell a sombre room that quickly turned to celebration; just how humbled his son is by the chance to follow the footsteps of Fittler, Kenny and Daley.

Asked why he believes Luai can handle the No.6 and rugby league's equivalent of an 80-minute hyperbaric chamber, Fittler threw to Luai's roots.

The same western suburbs, licorice all-sorts roots he boasts as well, having trod the same path over 30 years ago himself.

"He seems to have the courage when he plays for Penrith to play under pressure," Fittler says.

When Luai plays for Penrith, those same "westie" roots are never far from his thoughts either.

Since rising to prominence and dominance alongside Nathan Cleary, To'o and a host of proud local products, Luai has noticed more and more Panthers merchandise among the kids that mob him "down at the Mounty shops".

Growing up, it was Masada Iosefa playing the same pied Penrith piper role for Luai and the next generation.

The former Panthers, Tigers and Samoan hooker made tragic headlines earlier this year when he died, aged just 33, in a Northern Territory quad bike accident.

For a pre-teen Luai, Iosefa was "a Mt Druitt idol".

Plain proof that if you trudged up "Simi's Hill" long enough and often enough, anyone can finish at the top.

"It's tragic what happened. His family is still in the area and he was always known as the 'King of Tregear Hill' or 'Simi's Hill'," Luai says.

"It's a massive hill out our way, just brutal.

"But he would run it like there was no tomorrow, everyone knew the work he put into his career.

"I was like a lot of kids that looked up to him. He always had time for everyone and an army of kids that followed him at touch footy."

On Wednesday night, one of those kids has made it to the top of the hill. 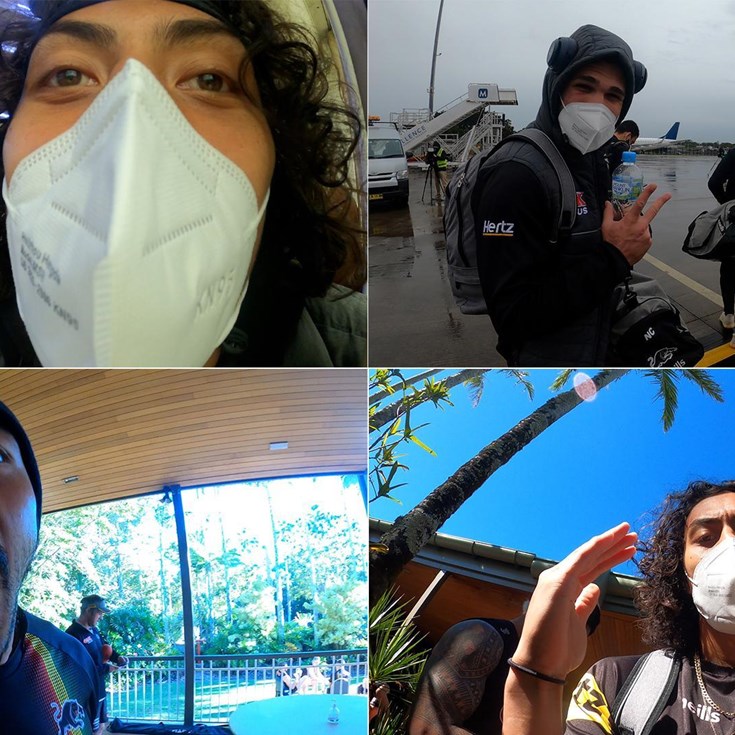