Latrell Mitchell made his point. Made an absolute mess of the Maroons along the way.

Back in sky-blue and sky high after NSW's record 50-6 Townsville trouncing of Queensland, Mitchell made a few more things clear in the aftermath of a rousing Origin return, a few more headlines for the road.

"I'm not satisfied, the job's not done yet."

Fair point. For a man blessed with such audacious ability, hanging your hat on one 80-minute Origin blitz after two years absent would be one hell of a waste.

"I wanted to make my family proud," Mitchell said.

"I wanted to make NSW proud again. I want people to be NSW supporters. You can’t live in NSW and support Queensland.

As Mitchell soaked up a jubilant Blues dressing room with family and friends on Wednesday night, the man of the moment initially knocked back interview requests.

"I've got stuff to do bra," he grinned to NRL.com before eventually relenting, again pointing to the fact Queensland still hold the Origin shield, and a trip to Suncorp still awaits in 17 days time.

When he eventually squared up for the recorders, Tooheys New tin in hand, Mitchell knows what's coming, and seemingly pauses for effect. "Did you play with a point to prove tonight?"

"A lot of people hate, but at the end of the day I play my footy the way I play and I like to think I bring excitement to the crowd.

Trbojevic's man-of-the-match performance by the numbers

"I had to work hard to get into this squad. It's the best of the best, its mate verse mate, state versus state, that's the saying.

"There's a lot of great centres out there who were in the running for this [spot].

"But at the end of the day I have a job to do and a point to prove."

Mitchell's message was ominous with his first touch of the ball on Wednesday night, threatening to carve out his own extra space and time deep within Blues territory.

When he did exactly that with NSW leading 2-0, not so much pinching 40 critical metres, more like mugging the Maroons in a brutish charge upfield, it set the platform for Tom Trbojevic's opening try, and the tone for the eight that followed afterwards.

Mitchell's one blight for the night was a kick-off sent sailing into touch on the full, offering the briefest of open doors for Queensland to just maybe sneak back through after Kurt Capewell's try.

In the very next set, Mitchell read a right-side shift like it was the morning paper, slammed Valentine Holmes into error and slammed that door shut.

For a man who has worn all manner of criticism over the past two years – some warranted, plenty not; plenty from punters and pundits, some from the people that matter most in NSW circles – these were the plays to be truly proud of.

The efforts and awareness that just wasn't seen enough in Mitchell's previous Origin outing – a series opener at Suncorp which was still dominating the news cycle six months later.

Mitchell wears a hit to put To'o over

As Mitchell told NRL.com leading into game one, his memories of Origin growing up are coloured by the greatest side the interstate contest has ever seen.

This Blues side that simply oozes talent but Mitchell dismisses the word "dynasty" as quickly as it is put to him.

"One job done but we have another job to do."

But his final point rings true in the context of game one's startling, stunning performance by the Blues.

"There was a period there when you had the best players in the world playing for Queensland. They were unbeatable. That combination was unbeatable.

"To be able to come into a team that was so confident and get the job done, it was an unbelievable feeling.

"I can understand why Queensland were so dominant for so long. But the boys that we have here I don't see what's any different.

"I'm very proud of the team. People at home watching footy, we know you are watching and we can’t thank you enough.

"Have some more faith, keep the confidence and it will go a long way towards winning the series." 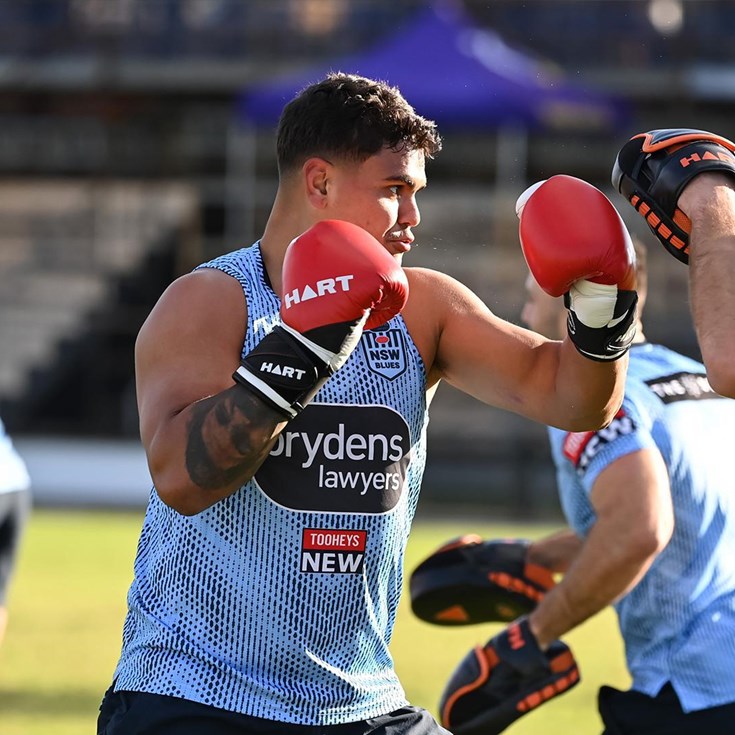 'It's in the past': How Bennett helped Latrell mend Blues bridges