Queensland have not given up hope of Ronaldo Mulitalo one day playing State of Origin after an eligibility drama forced the Maroons to omit the devastated speedster hours ahead of his debut.

QRL managing director Rob Moore said they had run out of time to prove his eligibility for Sunday's Origin II clash at Suncorp Stadium but hoped to plead a successful case in a submission to be handed to the NRL in the coming days.

NRL CEO Andrew Abdo on Sunday night told Fox Sports that there was a chance Mulitalo may be declared eligible in the future.

"There certainly wasn't enough time to consider an application today but that's not to say that that might not happen going forwards," he said.

The Maroons' preparation for their must-win Origin II clash at Suncorp Stadium was thrown into further chaos after they were forced to pull Mulitalo barely 24 hours after the winger had earned his debut as an injury replacement.

Mulitalo - who has played for the Queensland under 18s and 20s - was given the nod after Reece Walsh went down with a hamstring injury on Saturday.

However, the NSWRL asked the NRL to investigate the former Australian Schoolboys star's eligibility on Saturday after a 2019 QRL website article surfaced in which Mulitalo claimed he arrived in the country from New Zealand at the age of 14.

Under current rules, players can't play for Queensland or NSW unless they have lived in the respective state prior to their 13th birthday.

Moore refused to point the finger at NSW but was frustrated that concerns had been raised only hours before Mulitalo's Origin debut and years after playing for the Maroons under 18s and 20s.

"My big concern is that if someone had a question mark over his eligibility it should have come up four years ago," he said.

"And it definitely should have come up at 10am on Monday when the team was announced.

"It shouldn't have come up at 6pm last night. It should have been tested before he played 18s."

Moore said Queensland had not ruled out the prospect of the Sharks speedster one day donning Maroon.

Asked where did the fault lie in Mulitalo's eligibility drama, Moore said: "I don't know where the fault lies, if there is a fault.

"We are dealing with rules we are aware that don't get tested until such time as there are some grey areas.

"They have been tested in the past but it is unfortunate that it has come at this time.

"I think that is part of what we have to work through and verify.

"We have a history of young players coming from the Pacific Islands and New Zealand into our country to play rugby league, they do come in and out at different times.

"There must be some ability to build an argument around those rules."

"Given the fact this information was brought to us at really short notice there was no way you could consider an exemption in the timeframe that we had.

"The team has to prepare. The QRL took the decision not to destabilise their plans any further, to provide certainty."

While there remained a glimmer of hope for Mulitalo's Origin future, it wasn't much consolation for the gutted Sharks flyer on Sunday.

"When he got told that he was making his debut he broke down and was in tears that his childhood dream was about to come true," Maroons great and assistant coach Johnathan Thurston told Channel Nine's The Sunday Footy Show.

"Now that's been ripped from underneath him. He was a broken man this morning."

Moore said they would rally around a "devastated" Mulitalo as they prepared their eligibility submission for the NRL.

"We are dealing with a young man who has wanted to play for his state his whole career, he got his opportunity and it has been taken away really quickly," he said.

"We are dealing with a young player whose future is on the line."

QRL chairman Bruce Hatcher had told NRL.com on Sunday morning that Queensland withdrew Mulitalo to avoid any chance of a legal appeal after the game if he had been found to be ineligible.

Moore said there was also the outside chance of the Maroons forfeiting Origin II if Mulitalo's eligibility drama had escalated.

"We wouldn't put ourselves in that position but that could have been an outcome," he said.

"If there is any silver lining is that it was found before the match, I think the game would be in a very, very difficult position if this wasn't picked up and he was 18th man, he ended up playing and someone decides he was ineligible after that.

"This is bad enough that it happens the day of the match but that would be worse."

Moore agreed Origin eligibility should have stringent testing measures but he backed ex-NSW coach Phil Gould's call for the rules to be made more flexible in order to nurture the international game.

"To my knowledge, once the players declare their eligibility through the form, I don't believe there is any one point of truth where that information is actually tested and checked," he said.

"I think that is probably something that the game needs to look at.

"And there is a broader issue around eligibility. It also brings into account eligibility for internationals.

"That is something I know the game needs to look at. I have heard commentary about separating international eligibility from State of Origin, to develop the other nations - that makes some sense.

"It is a big ask for a teenager to sign a form that signs away their right to play for their home country."

ARL Commission boss Peter V'landys apologised to Mulitalo on Sunday, saying they had run out of time to use new discretionary powers to give the Sharks winger the Origin green light.

"I take all responsibility [on behalf of the code]. I feel very sorry for Ronaldo," he told The Footy Show.

"Last year we did change our rules to give the Commission [a say] on any matter or any rule but unfortunately the time wasn't there to do it today.

"But we'll certainly look at it during the week. I don't know who's to blame. I found out about it late last night.

"I think the very first thing we need to do is look after Ronaldo and then look at whether he's eligible." 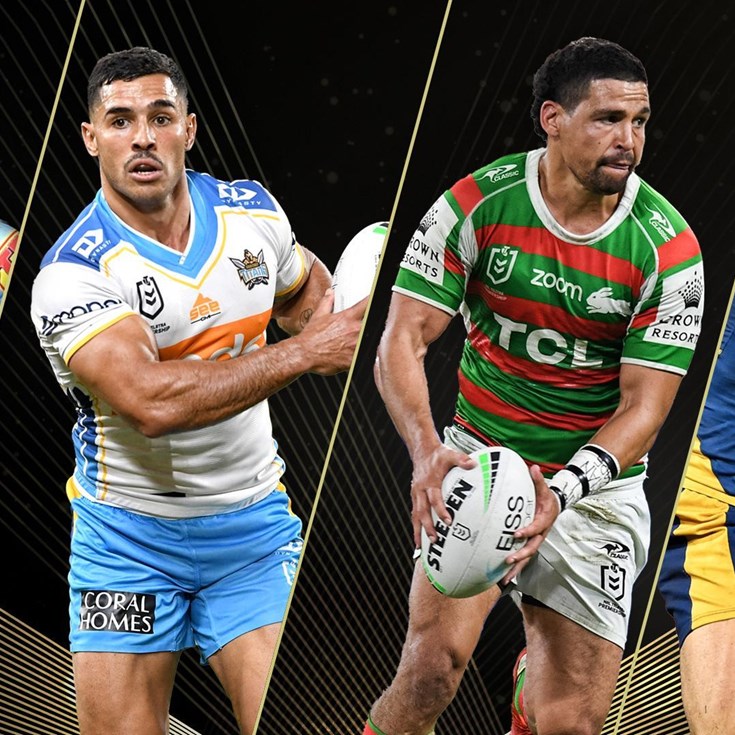 What’s the weirdest thing in a teammate's kit?