Few positives could be found by Queensland after their disastrous 26-0 State of Origin game-two loss.

But the Gold Coast Titans can see a silver lining, with the return of their humbled Maroons forwards set to spark a "fire in the belly" as they look to turn their NRL season around against Canberra on Saturday.

After four straight losses, the Titans have a spring in their step after welcoming back livewire fullback AJ Brimson (knee) and newly re-signed winger Corey Thompson (ankle), who will play his 100th game.

But another recent re-signing - centre Patrick Herbert - said the battling Gold Coast had received a further boost thanks to their returning Maroons contingent of David Fifita, Tino Fa'asuamaleaui and Moeaki Fotuaika.

The trio will be out with a point to prove against the Raiders at GIO Stadium after the Maroons were outmuscled in game two, held scoreless at Suncorp Stadium for the first time.

"Those players [Brimson, Thompson] bring so much energy and prowess to our team," Herbert said.

"But you've also got David and Tino who are coming off what is probably a disappointing season of Origin for them, so I'm sure they will be humming to get their spirits up for our game."

Herbert - who recently re-signed until the end of 2023 - said the only consolation after watching their Titans contingent being overpowered by NSW was knowing the likes of Fifita would return with a "fire in the belly".

"We have been disappointed with a couple of results lately but it is up to us, the 18 blokes that get to go out there on the weekend to turn it around."

Thompson certainly won't be short of motivation, adding another year on his deal ahead of his milestone game after already being contracted until the end of 2022.

Thompson - who also had stints at UK team Widnes and Wests Tigers - was made to sweat it out even more over his landmark game after enduring his eight-week ankle injury.

"It has taken a bit longer than others ... but to bring up 100 games is something I will remember forever," said Thompson, who scored seven tries in eight games this year before breaking down.

"It has been frustrating. I love bringing that energy to the team and playing hard each week and to not be able to help the boys has been hard to watch. Hopefully we can rebuild the season and finish strongly."

The Titans are still smarting from last round's 56-24 loss to Manly after leading 24-8 at half-time but they are only two wins outside the top eight.

Thompson said they had also been buoyed by the recent re-signing of young playmaker Toby Sexton for another two years until the end of 2024, although that may not be music to the ears of off-contract five-eighth Ash Taylor.

His future appears uncertain with the Titans also closing in on an extension with fellow half Jamal Fogarty and Tanah Boyd's signature already on the books for 2022.

Sexton is yet to make his NRL debut but Thompson said it was only a matter of time for the former Australian Schoolboys representative.

"He probably thinks he is ready for first grade and would do the job if called up but credit to him he is biding his time and is learning every day," Thompson said.

Overweight to 150: Rapana reflects on career

"You can see at training when we play the reserve-grade boys Toby is controlling them - his kicking game is unbelievable.

"When his time comes he will be ready for first grade and I am sure he won't let go of that jersey."

Sexton, 20, has adopted a patient approach playing for Intrust Super Queensland Cup side Tweed Seagulls despite watching some high-profile 2019 Australian Schoolboys teammates excel in the NRL.

"I am not trying to look too far ahead. I see my mates playing first grade like Reecey Walsh and Sam Walker and they are killing it," Sexton said.

"But I have got to look at it long term. Short term I think it has affected some young blokes who have come up but Q Cup has been a really good competition for me to grow as an individual and play against men on a week to week basis.

"If the opportunity came about I would put my hand up and be confident to play but I have to take it one step at a time." 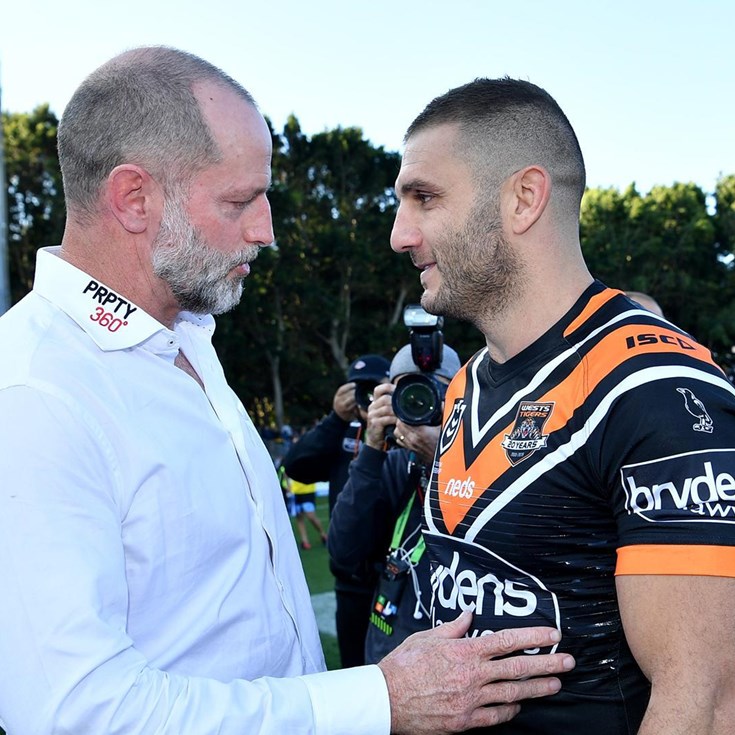