These two teams lie next to each other near the bottom of the table in 14th (Wests Tigers) and 15th spot (Broncos), so any win at this point is going to be very welcome indeed.

Technically the Wests Tigers on 12 competition points lie just one victory from the top eight. But the reality is that the manner of their losses - they are 148 points in the red - means it's still a long climb over the six clubs ahead of them to get there.

Their last loss does provide a little inspiration for the task ahead. The Wests Tigers came from 26-0 down at half-time against the Rabbitohs to out-score them 22-12 in the second half of their round 16 clash.

The Broncos are still humming the team song, which they sang with vigour for only the fourth time this year after their 26-18 win over top-eight side the Sharks.

And Kevin Walters' men are back at the scene of that triumph - Suncorp Stadium - to meet the Wests Tigers. They've won three from four games there to at least have a respectable home record in a season of disappointment.

Broncos: Kevin Walters confirmed on Saturday that Xavier Coates won't back up from his Origin III performance with Jamayne Isaako coming on to the wing. Origin rep Payne Haas, who was magnificent against the Sharks in round 16, will play.

Ethan Bullemor has 18th man duties while Coates dropped out as expected on Sunday.

Jesse Arthars comes on to the interchange for Cory Paix, who is omitted a day out from kick-off alongside Xavier Willison, who must wait for his NRL debut.

Kobe Hetherington has retained the No.13 jersey after getting a late chance to start in round 16.

Kotoni Staggs has scored seven tries in his past eight games at Suncorp Stadium.

Wests Tigers: James Roberts is in COVID isolation and out of the side after being present at an exposure site. He is replaced in the centres by Tommy Talau.

Michael Chee Kam was named 18th man when the final team was announced with Alex Seyfarth the match-day omission.

Moses Mbye is the biggest name to pay the price for a horror three-week stretch which saw the joint-venture club outscored 144 to 50 by the Storm, Eels and Rabbitohs. Adam Doueihi switches back to five-eighth and Fetalaiga Pauga makes his debut in the centres with Mbye on the interchange.

Blues squad member Stefano Utoikamanu has been promoted to start along with Thomas Mikaele, relegating Alex Twal to the bench and Alex Seyfarth to reserves.

Coach Michael Maguire has named a second debutant, Tuki Simpkins, to start on the interchange.

Tyson Gamble v Adam Doueihi: The feisty Broncos pivot is a former Wests Tiger, playing one game in 2018, while former Tigers junior Doueihi was at the Rabbitohs. Gamble's refusal to take a backward step will be important as Doueihi boasts a powerful running game. The Lebanon international did well when moved to the halves by Michael Maguire earlier in the season and will be keen to replicate that form.

Daine Laurie and David Nofoaluma are in the NRL's top 12 for tackle busts, but there's not a Bronco in sight in the top 30. 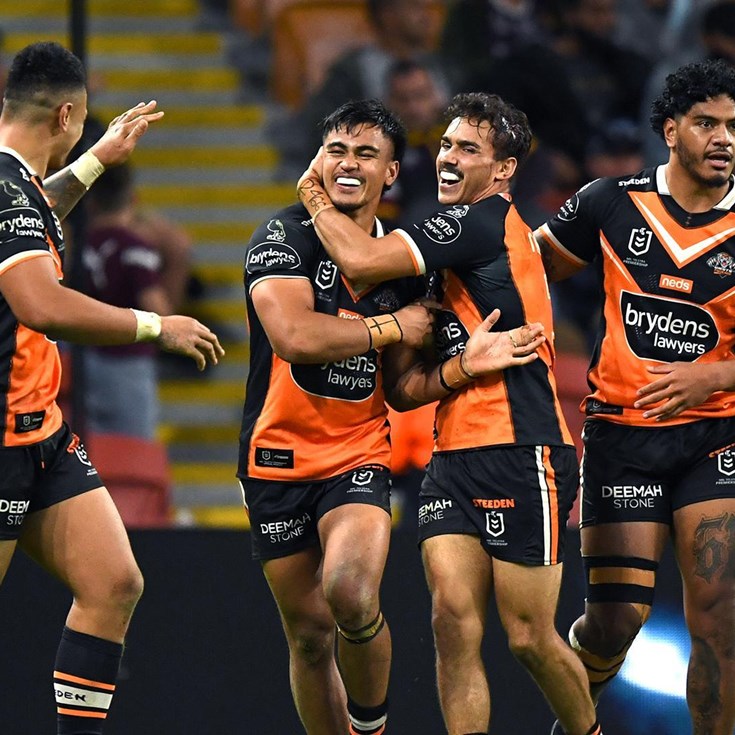 Haas shows he can just about do it all!