Roosters coach Trent Robinson described five-eighth Drew Hutchison's starring role in the 40-16 win over the Raiders in Mackay on Thursday night as "definitely his best performance".

Hutchison had three try assists, three line-break assists and ran for 122 metres as the Roosters climbed into fourth spot and ended the Raiders' season in process.

Robinson's men will need both the Eels and Sea Eagles to lose if they are to remain in fourth but regardless of those results they take plenty of momentum into the finals after the seven-try romp.

"They have deserved it, they have been working really hard to improve their game every week.

"Drewy passed a bit early and he also had three show-and-gos in about 10 minutes there ... I love the guys that play the balance between passing the ball but also knowing the picture in front of them and running the ball like that.

"I thought Lachie did a really good job and there's different ways I can use him as well so it's a bit of wait and see to see how I use Sammy [Walker]."

Veteran centre Josh Morris, who this week announced his intention to retire at the end of the season, said he was proud of the way the Roosters had put the emotion of last week's Rabbitohs game behind them and focused on the job at hand.

"This week was about getting back to us and trying to play the game, forgetting about last week and I thought we did that really well and we didn't let emotion get the better of us," Morris told Channel Nine post-match.

"We'll have to see what results come over the weekend but if it is sudden-death [next week] then that suits us as well.

"The young blokes are getting better every game they play and they probably wouldn't have had that chance if we didn't have our injuries. I'm really proud of this group, the adversity we've been through this year, it makes me proud to be a part of the club."

The Roosters trailed 6-0 after six minutes when Elliott Whitehead crossed for Canberra but they hit back through winger Matt Ikuvalu five minutes later.

Raiders fullback Charnze Nicoll-Klokstad was put on report for sliding in and making high contact with Ikuvalu as he grounded the ball and the Roosters were awarded an eight-point try.

Adam Keighran missed the kick from the sideline but landed the extra shot from in front to make it 6-6.

Keighran is there to catch a loose ball

The Green Machine hit the front again in the 19th minute when Josh Papalii powered over from close range but the lead would be short lived as Roosters back-rower Angus Crichton celebrated his return from suspension with a try in the 25th minute.

A blunder by Raiders winger Semi Valemei then gifted the Roosters the lead as he climbed high and failed to collect a cross-field kick and Keighran pounced on the ball to score.

On the stroke of half-time the Roosters extended the lead to 20-12 when Whitehead was pinged for a strip and Keighran slotted two points from directly in front.

Keighran continued a superb night when he left Matt Frawley in his wake in the 47th minute to grab his second try and the Roosters led 24-12.

Just five minutes later the centre had a hat-trick when he took the final pass off James Tedesco to finish off a 90-metre Roosters raid, getting the ball down despite crashing into the goalpost padding as three Raiders tried desperately to deny him.

Handling errors cruelled any chance the Raiders had of mounting a comeback and the game was put to bed when Hutchison put Ben Marschke over for his first career try in the 67th minute, before Harley Smith-Shields grabbed a late consolation effort for Canberra.

Tedesco was again magnificent with 260 running metres and 11 tackle breaks while Siosiua Taukeiaho (224 metres, 21 hit-ups) stepped up in the absence of Jared Waerea-Hargreaves who was a late withdrawal.

Robinson said the victory would apply pressure to the Eels and Sea Eagles if they wanted to jump above the Roosters and "to be in the position we are, I'm really proud of the way the guys are playing".

"The longer the season has gone, the cards that have been dealt are different, I'm really proud of the way we have played but you don't ever settle [for not finishing first]," he said.

"If you're in the fight you want to keep going, so now it's time to go, so we'll get a couple of days off, get recovered and get ready for week one." 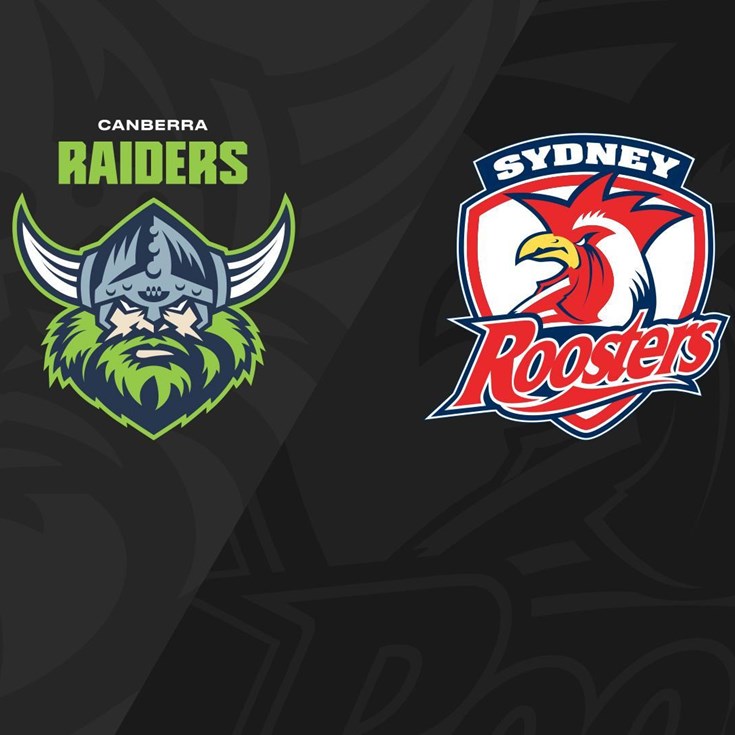