Wynnum Manly Seagulls are the first team through to this season’s Intrust Super Cup decider after a dominating 40-18 win over Tweed Seagulls at Suncorp Stadium.

Despite conceding the first four-pointer of the afternoon, the 2019 grand finalists never looked like losing the contest after a first half double to Delouise Hoeter helped set up a 22-6 lead at the break and the Bayside flyer added one more to his personal try-scoring tally in the second 40 to ice a well-rounded performance in readiness to overcome the grand final heartache of the previous full season.

Speaking after full-time, coach Adam Brideson was proud to overcome a courageous Tweed outfit to progress to next Sunday's decider.

"It was a very hot day and we were a bit clunky there in patches. Tweed came at us really hard but we’re super excited we were able to get through and we’ll see how we go next week," the Wynnum Manly mentor said.

"We probably didn’t defend quite the way we wanted to and we coughed up a few too many errors, but there was some fantastic spirit and commitment in the team and we’re really fortunate that we’ve come away with the result."

Scroll down below to see the live blog of the game as it happened.

An exciting start to the second half with Tweed starting the best possible way with Liam Hampson getting over.

But that was quickly equalised by Wynnum Manly utility Kalolo Saitaua powering over Tweed defenders to bag a finals try.

Tweed Seagulls have fought hard and had their chances, but Lee Turner was denied by the Bunker (which is in use for both the Intrust Super Cup preliminary finals matches) after putting his foot on the line when getting the ball down.

To make things even tougher for the boys from the border, Wynnum Manly all but put the game beyond doubt with Hoeter bagging his hat-trick.

The Seagulls kept fighting to stay in the match and after a deft kick through the defenders, Daniel Ross scooped up the ball, rolled over and scored with just over five minutes left in the match to get some respectability on the scoreboard.

But once again, Wynnum Manly Seagulls are able to extinguish hope from Tweed, this time with a magnificent team effort resulting in a second try for Berrell.

After a tough opening 17 minutes, Tweed shot out of the blocks with Juwan Compain crossing.

Just as Tweed looked like they were settling into the contest, the Wynnum Manly Seagulls went bang, bang, bang.

Delouise Hoeter joined in the fun in the 30th minute with a stylish try in the south-eastern corner.

This was followed by more points four minutes later with Francis Kalisolaite-Tualau crossing.

To rub salt into the wounds, Hoeter crossed again for another four-pointer to give the 2019 grand finalists a commanding lead heading into the sheds.

Kick-off to the first preliminary final at Suncorp Stadium.

Finishing second in the regular season, Wynnum Manly Seagulls knocked off Burleigh Bears in week one of the finals to set a date against Tweed, who have taken the scenic route to Suncorp after narrowly losing out to Norths in week one before recovering with a dominant win against Redcliffe last weekend.

A repeat of their 2011 grand final which was claimed by the green-and-red variety of Seagull, their last finals clash was in 2012, where Wynnum Manly again claimed the win, a 30-4 preliminary final victory at BMD Kougari Oval.

Read all the match stats in the preliminary finals preview. 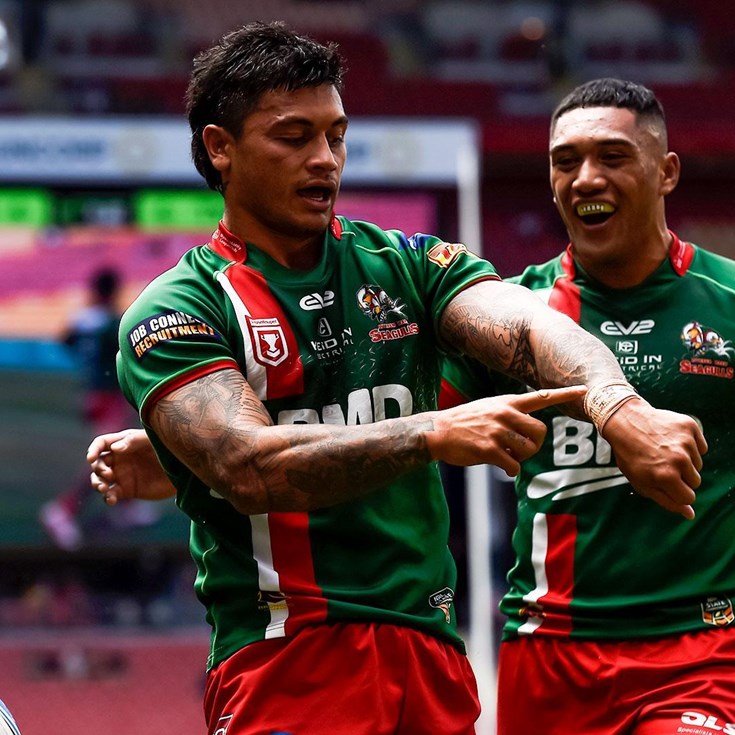 Ross wins the race to a McGrady kick

Wynnum save their best four-pointer till last!

Hoeter has a hat-trick from a Tweed dropout