There were mixed emotions from Rabbitohs fans after 2021 – a season that was a success by (almost) any measure, yet resulted in a grand final defeat and the departure of favourite son and club captain Adam Reynolds.

Coach Wayne Bennett and veteran Benji Marshall also bid farewell at the end of the season, along with Dane Gagai, Braidon Burns and Jaydn Su'A, but it's the loss of their legendary coach and 231-game halfback that creates the biggest unknowns heading into 2022.

Bennett's long-term assistant Jason Demetriou will step up as head coach next year at a club still packed with plenty of talent, and that will have superstar fullback Latrell Mitchell back on deck after the team stunned the critics to reach the grand final without him this season.

But the Rabbitohs' key player remains attacking maestro Cody Walker, a 31-year-old five-eighth who is seemingly only getting better with age – having hit career-highs for tries (16), try assists (33) and forced dropouts (15) this season.

2021 NRL season by the numbers

Only two teams beat the Bunnies all season – reigning premiers Melbourne and 2021 premiers Penrith. They did so twice each during the regular season before the Panthers snuck away with a two-point win in the grand final.

Along the way the Rabbitohs went on two long winning streaks – a seven-match run starting in round two and a sublime 10-match streak from round 12. Away trips didn't slow them down, and neither did the league-wide relocation to Queensland late in the season.

South Sydney's league-best run metres differential is all the more impressive considering the Rabbitohs don't have any massive individual metre-eaters. Tom Burgess has emerged from outside the shadow of brothers Sam and George in recent years and topped the team's tally with 142 metres per game, just ahead of Latrell Mitchell (141m/game), young forward Keaon Koloamatangi (135m/game) and Dane Gagai (134m/game).

Twelve of the 16 clubs had at least one individual player average 150 metres per game or more this year; for Souths to have none and still dominate this stat as a club shows how much of a strong team effort their 2021 campaign was.

Souths had the second-best attacking record in the league this year, with only the record-smashing Storm piling on more points than the rampant Rabbitohs in the regular season. They scored at least 30 points in eight straight matches between round 15 and round 22, and the numbers show they were a pretty consistent attacking threat from the first minute of each game until the 80th.

The Rabbitohs were at their best defensively when those Wayne Bennett pep talks were freshest in their ears, conceding just 15 tries in 24 games in the opening 20 minutes of a contest, and proving even harder to crack at the start of the second half.

In terms of scoring tries after receiving an extra set of six tackles, Souths ranked equal fifth in the league, alongside the Panthers, and behind front-runners Melbourne and Manly (both 22). But they were second best when it came to preventing other teams from scoring from a repeat set, with just nine tries conceded from a six-again call all season.

Wayne Bennett's sides have traditionally prioritised keeping possession over chancing their hand and that continued this year, despite the Rabbitohs boasting plenty of talented ball-players. They actually ranked fourth-last for total offloads in the regular season with 204, ahead of only the Sharks, Bulldogs and Cowboys. Their 6.6 metres gained per offload had them second last ahead of only the Bulldogs (Melbourne was top with 9.4 meters per offload).

If that strategy changes next year, expect the likes of Latrell Mitchell (21 offloads), Cameron Murray (19) and Cody Walker (17) to up their numbers in this area.

While the Rabbitohs will miss Adam Reynolds' leadership, playmaking and kicking in general play, they'll also miss his accurate right boot from the kicking tee. With Reynolds firing at 79% this season and the team as a whole at 77%, Souths kicked the most goals in the league in 2021, with two more than the Storm and 16 more than Penrith.

Souths were middle of the pack in this category, but were one of the most experienced squads in the league with an average of 89.6 appearances per player (second behind the Sharks, with 99.7). That came despite the Rabbitohs giving debuts to five players, with eight players at the club being under the age of 23 this year.

One area of improvement for Souths in the Demetriou era will be one-on-one steals, with the team pulling off just two strips across the regular season – the fewest of any club in the NRL. Meanwhile they conceded possession from strips seven times, about average for NRL clubs in 2021. 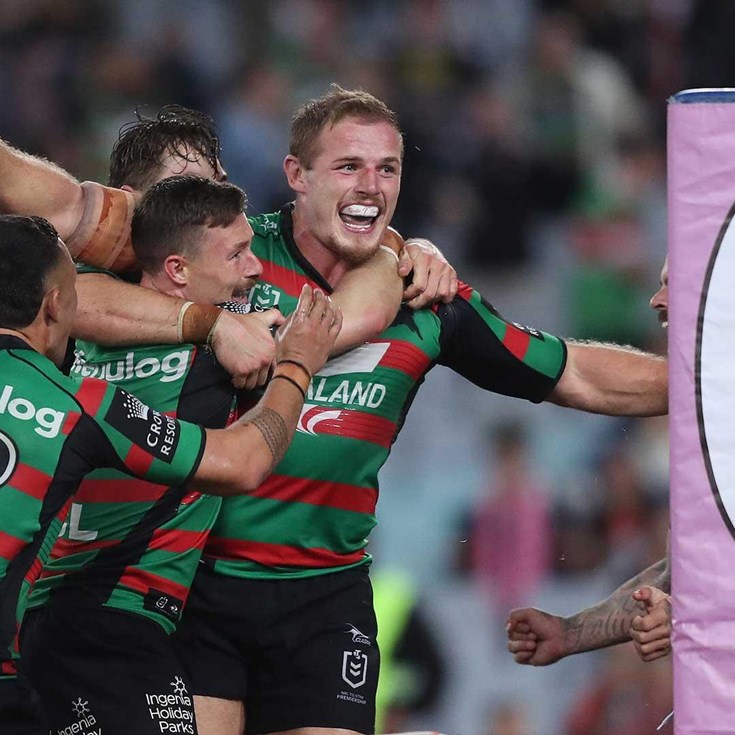