Billy Slater is a freak: we all know it, he knows it – but sometimes you just have to voice the obvious. With two more tries against the Roosters last weekend Slater became the only man to open a rugby league season with four consecutive doubles. It took his overall career try tally to 132 – more than any other fullback in the history of the game.

But it also got me thinking: who are the best try-scorers for each position in the NRL? And who ranks best in the history of the game?

While we all see Slater carving it up each week, did Michael Weyman’s blistering effort against the Sea Eagles put him amongst the prop forward elite? Cameron Smith kicks a lot of goals and controls the ruck from hooker, but how do his try numbers stack up against the best rakes?

It’s time to delve deep to see if anyone else is likely to break a Slater-like record in the coming rounds, or even this season… or any time in their careers.

It is important, however, to note some of the game’s best try-scorers played in a number of positions – Bob Fulton at centre and five-eighth, Darren Lockyer at fullback and five-eighth, Steve Menzies at centre, second row and lock, Phil Blake in just about every position – so I have taken the liberty of putting them into the position I feel they were at their best, even if they may have scored a few more tries in another position. Unfortunately the archives at NRL Stats can’t yet conclusively indicate who scored from what position (they are pretty close, but not exact) – their researchers will continue actively going through every game ever played throughout next off-season.

Fullbacks
Since all the current fuss has focused on Slater we will start with the custodians.

It’s interesting to note Bowen and Stewart make the list; obviously, along with Slater they are still playing. Bowen is the elder statesman at 30 while Stewart (27) and Slater (28) have a few years on the Cowboy. Where will they finish up when all is said and done? The only other current player seemingly in the mix at this stage to move up is Rooster Anthony Minichiello who with 106 tries isn’t far back. Perhaps Jarryd Hayne with his 67 tries will eventually push up the list, although just where he plays the majority of his football remains to be seen having had stints on the wing, centre and at five-eighth. Also, every one of these five fullbacks is from the NRL era.

To this day Irvine is the master try-scorer in the history of the game in Australia. His 212 tries remains the clear-cut leader from former Sea Eagle Steve Menzies who sits second on the all-time list at 180. Not one of our current flyers makes the top five here, but are any close? Rabbitohs speedster Nathan Merritt is the one most likely to crack the list with his career tally at 123 tries so far. After him Luke Burt is at 117 tries (although his demotion to the NSW Cup could make it hard for the veteran Eel to make a run). Manu Vatuvei is closing in on the century at 93 tries. Perhaps those to keep an eye on in the future are Brett Morris at 76 (perhaps at the end of his career he’ll fit in the fullback bracket), Steve Turner (79) and Akuila Uate (54).

Former Sharks great Ettingshausen has set a mark tough to beat. While Dragons centre Matt Cooper is already inside the top five, even his most ardent fans would find it hard to believe he can catch the Cronulla boy before hanging up the boots. The same can be said for Timana Tahu and his 110 tries, plus Colin Best at 102. The next active player who does have a shot at making a run into the top five would have to be Greg Inglis, although he too is perhaps in the midst of a career position move to fullback. Inglis has 87 tries to his name at this point in his career. Other current centres include Justin Hodges (84 tries), Jamie Lyon (80), Willie Tonga (75), Josh Morris (68) and Michael Jennings (65).

‘Baa baa’ Lamb was known as one of the best, if not *the best, support player of all time. It helped him to a mammoth 164 tries in his career. Lockyer’s retirement leaves us with no current pivots on this list but perhaps a few players might make a run at it in future years. It would seem there isn’t a contender knocking right now, with Braith Anasta the best of the active lot at 83 tries (and the debate could be made for him as a lock). The player to actually keep an eye on is Wests Tigers and Kiwi sensation Benji Marshall who sits at 67 tries. With a bit of luck injury-wise he should crack the ton in the next few seasons. Todd Carney has tallied 52.

Once again the all-time top five is devoid of current players and the mark of 138 might be very tough to beat, especially as Blake had the ‘benefit’ of playing as a utility for much of his career. The same can be said about Alexander and Hasler. It takes a while to sift through the pages before getting to a current halfback, with Johnathan Thurston leading the way (63 tries) – although he’s now a five-eighth, which really complicates matters! After ‘JT’ it’s Scott Prince (59), Ben Hornby (58) and perhaps the main threat, Cooper Cronk (53).

One of the tougher positions to measure as most lock forwards also spend plenty of time in the second row. The top dog of the current crop of locks is Titan Ashley Harrison who has 54 tries to his name so he could force his way onto the list this season. Paul Gallen sits at 47 tries – although the way he keeps playing up at prop might force a permanent career move.

It seems Steve Menzies will never be leapfrogged in this category. The former Sea Eagles legend is still playing with Catalans in France… had he stayed in the NRL perhaps he would have taken down Ken Irvine! Menzies is a whopping 60 tries ahead of his nearest rival and a long way from the only active NRL player, Luke Lewis. Anthony Watmough is the next current player to crop up (64 tries), before Nathan Hindmarsh (with 58).

This is a mark where a new king will be crowned soon – potentially this season if Danny Buderus can get a few ‘meat pies’ in the coming weeks. Robbie Farah appears odds-on to take the top spot also at some stage in his career, but will any others run him down? Nathan Fien sits at 39 tries, while Cameron Smith has crossed 31 times.

I will go on record as saying no prop will break Frank Burge’s record of 146 tries. Now, while it is true Burge also played second row and lock, the justification for putting him atop the pile of props comes via the fact he was named in the position for the New South Wales Team of the Century. As stated earlier, Paul Gallen has compiled 47 tries but he is still a lock forward. If you want to find the next try-scoring ‘freak’ amongst active props you have to go all the way down to Petero Civoniceva – but he has just 25 tries.

So there you have it – a look at who has graced the try line from each position most often over the years, and those who may finish up inside the lists.

But perhaps a more pertinent try-scoring list to delve into would be how often a player scores their tries. How valuable are they each week when it comes to getting across the line? We will go into strike rates next week!

Until then don’t forget to catch me on twitter @NRLStatsInsider. 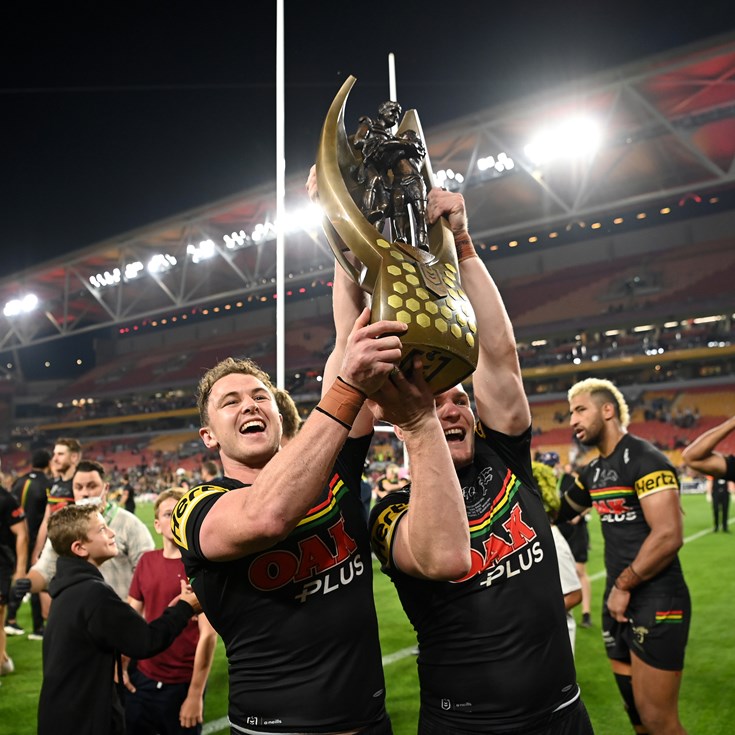