All the key ins and outs for Holden NRL Fantasy heading into Round 10.

Rabbitohs: Souths are unchanged. Apisai Koroisau's time as a cash cow may be over with the hooker facing a potential three week ban if he's unsuccessful in having his dangerous throw charge downgraded at the judiciary. Hold or sell depending on what happens on Wednesday night. Alex Johnston ($136,124) is another cash cow on the rise with another couple of tries on the weekend. Human wrecking ball George Burgess ($390,071) is on a hot run of form with scores of 77 and 82 in the past couple of rounds, and looms as a must-have for Fantasy teams chasing overall points over the bye rounds. Dylan Walker ($230,254) scored four tries on the way to 76 points in the Rabbitohs' rout of the Gold Coast, while John Sutton ($346,446) and Adam Reynolds ($350,134) both remain solid options in the halves if you're looking to score well on the bye rounds.

Storm: Ben Hampton is out through suspension, with Joel Romelo replacing him at five-eighth this week. Kurt Mann ($115,553) announced himself as a player (and a Fantasy cash cow) for the future with a strong debut in the centres for Melbourne, with the young gun – more used to playing at fullback or in the halves – making the most of his late inclusion in the centres for Craig Bellamy's side by scoring the match-winning try against Manly. He finished with a solid 36 points in Fantasy and will make some cash while he remains in the team, although Justin O'Neill is due for a return in Round 11 or 12. The 'Big Three' of Slater ($301,118), Smith ($506,191) and Cronk ($378,650) all broke into the 70s last week.

Broncos: The prop cycle continues with Martin Kennedy dropped this week, Ben Hannant back on the bench and the uber-cheap Jarrod Wallace ($103,210) getting his first shot at a starting spot. Wallace would be a good cash cow if he becomes a long-term starter, but Brisbane are every chance of mixing it up again next week. Andrew McCullough (72) and Ben Hunt (57) continue to impress in Fantasy while the solid-but-unspectacular Corey Parker (52) remains a hold.

Titans: A few changes at the Gold Coast this week, with Greg Bird out suspended, Ryan James and Matt Srama dropped, and Luke Bailey, Matt White, Paul Carter and rookie Cody Nelson coming into an 18-man line-up. Only two Titans scored more than 40 Fantasy points in their thrashing at the hands of South Sydney – Ashley Harrison and Nate Myles – with Albert Kelly (32) and Aidan Sezer (22) looking far from safe as halves purchases for the bye rounds. There could be value in the Titans' second row in the weeks to come with Myles and Bird away on Origin duty in Round 11, 14 and 17.

Eels: Just one change for a successful Parramatta side this week with Joseph Paulo starting at lock and Peni Terepo back to the bench. Jarryd Hayne ($380,707, 73 points) was superb again for the Eels in their win over Cronulla on Monday, and although he'll play Origin he will be available for every regular season head-to-head round in Fantasy. Chris Sandow ($306,226) cashed in as well with 68 points, but beware the Eels won't be thumping teams every week. Willie Tonga ($166,342) has a little bit more cash to make after scoring 36, while Nathan Peats ($280,405) and Manu Ma'u ($290,336) have peaked. Peats still has a few 50+ left in him but he's in some injury doubt this week and will lose cash in the short term, so if you don't rate him as a keeper now's as good a time as any to trade.

Dragons: Jason Nightingale returns on the wing, while mid-range cash cow Mike Cooper is out with an arm injury and has been replaced on the bench by Will Matthews. Man of the moment Benji Marshall hasn't been named yet but could be a late inclusion – although I recommend waiting at least a week before considering him for Fantasty. Gareth Widdop ($260,685) has averaged just 28.8 points over his past five games, with just one 40+ score (a 47 against his old club Melbourne) in that time, and is a sell. He will play in two of the three bye rounds but his scoring is just too erratic at the moment – and it remains to be seen whether the arrival of Marshall will help.

Sharks: Andrew Fifita is set to miss up to six weeks with an ankle injury, with Bryce Gibbs and Sam Tagataese back starting in the front row and Fifita's brother David joining a seven-man bench. Fifita is a sell, with a stack of in-form options in the front row to replace him. For overall points, Sam and George Burgess and Bulldogs props James Graham and Aiden Tolman are the best bets, while Melbourne's Jesse Bromwich is probably the best pick for head-to-head. The Sharks may have struggled against Parramatta but hard-working back-rowers Paul Gallen ($379,928) and Wade Graham ($306,084) both racked up scores in the 70s, while fullback Michael Gordon ($282,959) reminded us what he can do with a season-high 61 points.

Tigers: Robbie Farah and Braith Anasta are back from injury, with Blake Austin back to the bench and Joel Luani and Sitaleki Akauoala dropping out. Kurtis Rowe ($130,946) is suddenly back on the agenda as a cash cow after making 56 points in the loss to the Roosters, a score that should keep his price climbing in the short term – but it could only be another couple of games before the return of James Tedesco.

Cowboys: Injured trio Tariq Sims, Antonio Winterstein and Ray Thompson return, with cash cow Curtis Rona out with an ankle injury, Robert Lui squeezed out and Glenn Hall named 18th man. Jason Taumalolo has been named to start despite a slight ankle injury. Veteran prop Matt Scott ($380,069) is just one try away from being North Queensland's equal leading try-scorer this season, crashing over for his third four-pointer in nine games last Friday. The veteran prop was awesome against the Broncos, making three line breaks, 25 tackles, and about a kilometre of run metres for 85 Fantasy points. He's averaged an impressive 55 points a game this season, but will miss the three major bye rounds on Origin duty plus Round 18 with the bye. Michael Morgan ($274,021) was another standout in the Cowboys' win and made a season-high 61 points from fullback, taking his average over the past five rounds to 47 – a big improvement on his 25-point average from the first month of the season.

Roosters: Sonny Bill Williams ($318,143) finally sparked back to life with 55 points from the Roosters' thrashing of the Tigers, although he gets a shift in the halves this week due to Mitchell Pearce's club suspension. Mitchell Aubusson starts in the back row in Williams's place, with Daniel Mortimer on the bench and likely to spend some time in the halves. Mortimer owners should be a little worried though that Mortimer hasn't slotted straight into the starting side in Pearce's absence. Daniel Tupou ($257,351) top-scored with 60 last week but is looking more and more likely to have played his way into an Origin jersey – which would mean he'd miss five games over the bye period.

Get your Round 10 tickets now

Raiders: A horrible performance from Ricky Stuart's men translated to a string of low Fantasy scores last week, with tackle addict Shaun Fensom ($420,998, 55 points) and electric fullback Anthony Milford ($266,431, 45 points) the two exceptions. They've predictably switched things up this week with Matt Allwood dropped, Jack Wighton moving back to centre, Josh McCrone switching to halfback and an epic eight-man bench named. Cash cow Wighton ($229,049) looks like a sell after scoring just 11 points last week, but keep in mind the Raiders do play in the tricky Round 11 so is probably worth holding until then for overall points Fantasy teams. He's a natural centre so his scoring should remain pretty steady after the positional switch.

Panthers: Tim Grant comes into the squad for the concussed Nigel Plum in the only change to the 17. Penrith cruised to victory against the Knights in Newcastle last week and their backline benefited in Fantasy, with Josh Mansour (81), Jamie Soward (69), Matt Moylan (60), Dean Whare (47) and David Simmons (46) all scoring big. Mansour ($342,686) is a genuine keeper at the back, with his average of 53.43 a massive return for a winger.

Bulldogs: Is the T-Rex back from extinction? One-time fantasy monster Tony Williams ($303,246) crashed his way to 76 points in the Bulldogs' win over the Dragons, grabbing a try on the way. He's averaging close to 50 over the past five rounds. Safer bets Josh Jackson ($290,194) and hat-trick hero Tim Lafai ($313,461) both look like great buys for the bye rounds if you're playing for overall. The red hot Bulldogs are unchanged this week.

Warriors: The Warriors are also unchanged, with Shaun Johnson the main man after a big win over Canberra. A season-high score of 77 thanks to a couple of intercept tries took the halfback's average over the past five games past 60 and his price past $300,000. Johnson's Fantasy scoring relies heavily on attacking stats, but despite that – and the fact the Warriors are notoriously unpredictable – he's still managing to be scoring consistently well. Konrad Hurrell ($337,153) also impressed with 75 points after a difficult week.

Sea Eagles: James Hasson replaces 18th man Tom Symonds on the bench in Manly's only change. Jack Littlejohn's run as a short-term cash cow continued to go well with 57 points and a $37,124 price rise on the weekend, while Jamie Buhrer ($228,410) scored a try to pick up 59 points at lock in place of the injured Glenn Stewart. Jorge Taufua ($307,502) is one of the stronger Fantasy wingers out there, hitting 53 to take his average to 47.25 after four games. 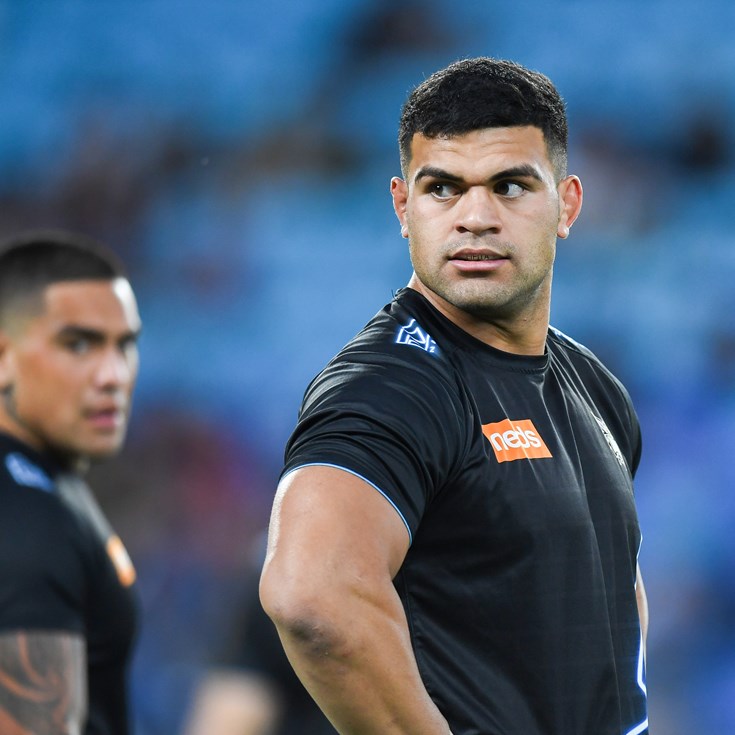