Such is the hype around this year's State of Origin we can sometimes forget there is a round of blockbusting NRL games looming – and Friday night's crucial clash between the Bulldogs and Roosters is central to both.

Premiership heavyweights the Roosters snapped a four-game losing streak in convincing fashion against the Wests Tigers last week and are suddenly looking like the early season favourites that trounced the Cowboys in Townsville in Round 1.

The Bulldogs however are coming off two straight losses, and both sides are part of an incredible logjam in the middle to lower part of the ladder: each side is on eight competition points, the Roosters seventh and Bulldogs 11th on for-and-against.

Each side is just one win in front of last-placed Manly, highlighting how crucial every victory is.

And looming over the top of it all is the irresistible Origin storyline, and call it good luck or good management but the NRL draw has handed us a tantalising match-up between the under-pressure incumbent halves of the Bulldogs and the in-form challenging pair of the Roosters.

We'll expand on that below but in terms of team changes the big news for the Bulldogs is the return of inspirational skipper James Graham from a four-game suspension, and Reynolds from a one-match tripping ban. Greg Eastwood also returns after a concussion break. Moses Mbye and Sam Kasiano drop to the bench and, in a blow to his Origin hopes, David Klemmer moves to an extended bench along with Lloyd Perrett and Antonio Kaufusi.

The Roosters are unchanged after their big win last week.

Draw Widget - Round 10 - Bulldogs vs Roosters

Watch out Bulldogs: The Roosters are suddenly red-hot and it was their left edge that caused the Wests Tigers so many headaches last week. James Maloney marshalled things well, Boyd Cordner ran his lines to perfection, hammering over for one try and being held up on another occasion, while the Michael Jennings-Daniel Tupou combination was running like a well-oiled machine with the centre throwing the last pass for two of the lanky winger's three tries.

Watch out Roosters: The Dogs are a different team with big James Graham back at the helm. The Englishman's ultra-competitive nature can be both a blessing and a curse. It's helped him become one of the best props in the sport who churns out amazing numbers playing big minutes every week, but it also resulted in him cooling his heels for four weeks after losing his cool at the officials in a fiery Good Friday clash against the Rabbitohs.

The Bulldogs were three from four before that game and are one from four in the month he's been out, which is no coincidence.

Key Match-Up: Do we even need to tell you? All eyes will be on the halves pairs as Maloney and Pearce match up against Reynolds and Hodkinson.

They're all in the frame for Blues jerseys but only two of them (at most) will be given the nod on Tuesday. The Roosters pair are in superb form; Pearce was man of the match against the Tigers and Maloney was named best on field a week earlier for Country.

Pearce's running, passing and kicking games are all firing at the moment and Maloney's goal-kicking was also a standout last week as he got six straight – plenty from out wide – after missing a tough first-up sideline effort.

The Dogs don't quite have the same luxury. Reynolds missed three games early on with a broken arm then last week through suspension while Hodkinson had an interrupted pre-season due to a knee injury suffered in last year's finals and still looks a little hesitant.

Pearce (eight) and Maloney (six) are racking up the try assists while Hodkinson (five) and Reynolds (four) aren't actually all that far behind, especially given the games Reynolds has missed.

The Roosters pair only have a 12-10 edge in line break assists as well.

What Are The Odds: There’s twice as much money on the Roosters in head to head betting with Sportsbet, but punters believe it’ll be the Roosters winning in a close one, with 1-12 being the favoured option. Latest odds at Sportsbet.com.au

The Way We See It: A bell-ringer of a contest awaits and the Bulldogs know how to get up for the big games. But so do their opponents, who have the benefits of an unchanged team and good recent form. We're tipping a semi-final type intensity with the Roosters to emerge narrow victors. 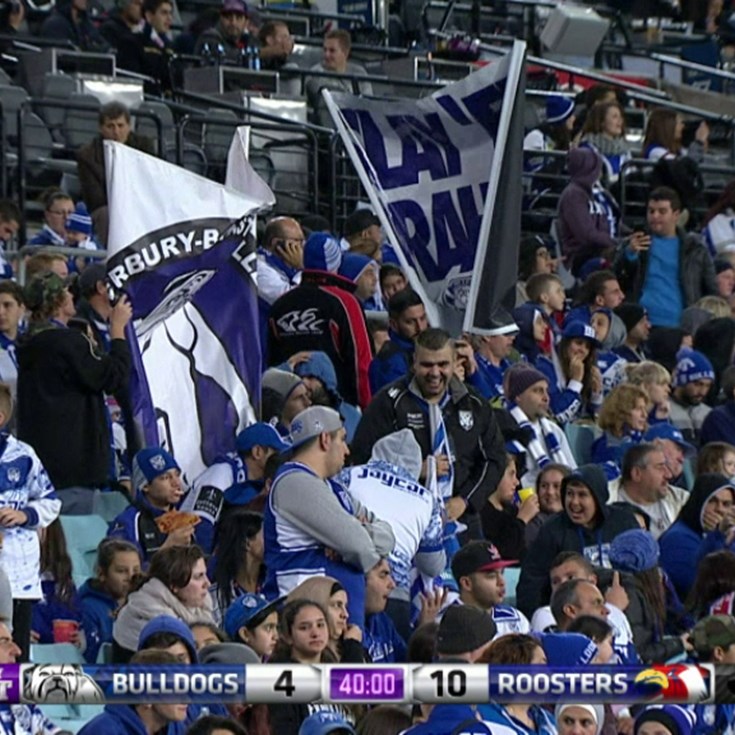